A Brave and Seasoned Warrior 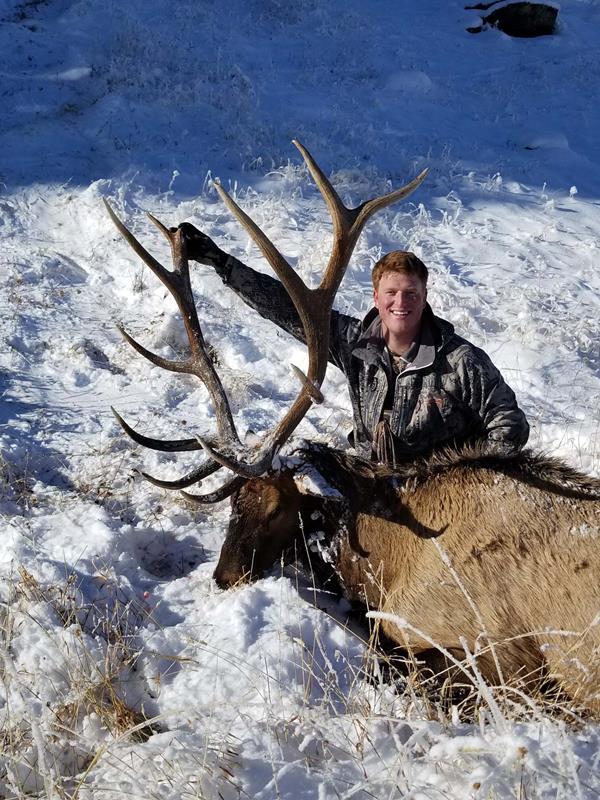 Four years ago, a good friend of mine, Kenny Carlson, got me into archery hunting, and every season since, my bounty has been plenty. Every year, my freezer was full of antelope, whitetail, and mule deer, but the steaks and roasts of one creature remained starkly absent. Every season, I chased the mighty wapiti, and every season, I came home empty-handed. To be sure, I learned so much about myself and elk despite coming extremely close every season to shooting a bull elk, but it was a reminder that, like most things in life, close doesn’t count.

Much to my dismay, the 2017 elk hunting season was shaping up to be like the rest. I had applied for a prized area in the Bighorn Mountains in northern Wyoming but drew nothing and was relegated to hunting on a general tag. To my ever-mounting frustration, my attempts during archery season proved unsuccessful. However, this year was different as my competitive nature was gnawing at me. I was sick and tired of coming up empty-handed, and I couldn’t stand the prospect of getting skunked another year. I just had to try again.

On the last day of the season, I picked up Kenny at 4:15 a.m. and we headed up the mountain to area 37, which largely consists of Forest Service land in the Bighorn Mountains. We knew what we were getting into. It was the last day of the season on a self-guided hunt on public land on a general tag. We knew it was a Hail Mary, and we knew odds of success were low. We went anyway, though.

Busting out the boom stick is taboo in bowhunting culture, but if I wanted an elk, I had to risk being called a heretic. To my benefit, however, was the ace up my sleeve. Kenny is the most skilled hunter I know who has harvested a bull every year for the last 10 years on public land with a general tag using a bow. I almost always hunt alone, but I knew bringing him could only help my odds.

By 5:15 a.m., we began hiking through six inches of new snowfall. Our plan was simple - hike up through what I’ll call "Willet Creek Canyon" up to the sprawling prairies and into the clearings that abound on the upper flanks of the Bighorns in the hopes of catching bulls pushed into the open by snow and cold temperatures. While we knew the weather was on our side, we also knew time was not. Any bulls feeding and bedding in the open would only soak up the warm sun for so long before heading back into the timber.

In the presence of a nearly full moon, we decided to move in the moonlight without headlamps. We hiked for about a mile along the creek bed, only hearing our snow-muffled steps and running water. We gained only moderately in elevation, and then the trail turned upward and we climbed. It wasn’t until another mile passed by that we finally climbed high enough to have the vantage point we wanted for glassing. We ascended a ridge that looked deep up into the canyon, which split into two smaller canyons, carved out by water millions of years ago. It was here that we had yet to pull our glass out when Kenny mutedly exclaimed “There, way up there!” I pulled my binos out to check. Sure enough, some 2,000 yards up the canyon were two bulls coming out of the timber to feed. Kenny and I looked at each other, and we knew what had to be done.

To say we hustled would be putting it modestly. We began to run, almost sprint, first down the ridge where we had spotted them across the creek and up the 100-yard nearly vertical creek bank which we bear crawled because it was so steep. After a 30-second water break, we ran up through a thicket and several aspen groves onto the lower end up a ridge facing the opposite ridge where the bulls were bedded. Here, we reassessed our situation and checked to make sure the bulls didn’t move.

Crawling up to the crest of the ridge, we pulled out our glass. They were still there bedded down, unsuspecting. Slowly, we eased back down, out of sight, where we crawled another 200 yards up the ridge to get into position. We found a small clumping of bushes and decided this spot would have to do. We knew they could head up into the timber at any time. Kenny unsheathed his H.S. Precision 6.5x284 and handed it to me. It was 8:00 a.m. with no wind and not a cloud in the sky. I calmed my breathing and got ready for the shot, 500 yards on the dime.

It's at this point that every hunting story has as twist. As I was getting my breathing under control, we heard something way down the canyon. Kenny pulled his binos up and checked. A hunter from the previous day was packing out, and his dog was barking loudly and frequently. Through the scope, I watched the bulls as they went from being calm and at ease to alert and anxious. Out of the two, one was a moderate 5x5 and other was a 6x7 prize bull. I watched my bull stand up and look down the canyon towards the barking. He was facing directly towards us. The moment had come, it was now or never. It looked as if he was going to turn and bolt up towards the timber, but I caught a huge break. He turned 90 degrees and stood broadside. Not having rifle hunted in years, I forgot how loud the crack of a rifle can sound as its bang was only echoed louder by the canyon walls. I aimed right behind his shoulder and squeezed the round off. He didn’t flinch, but he turned and started running for the timber some 40 yards away. A bolt of panic ran through me. Through the scope ,I watched him start to run into the timber, and then it happened. He hadn’t run four trees deep when I saw him keel over. He was down.

It took another hour for us to get to him. The ridge we were on was gated by a 40-foot cliff, forcing us to shimmy along the side of it until we found stable ground to get across the ravine. Creeping through the woods, my mind, still pumping with serotonin, raced with terrifying possibilities, however irrational. What if he got up and ran? What if we spooked him? What if he was gone for some reason? What if he climbed into my pickup and took off?

We found him, lying on his side, dead as could be. As is wont for me for any animal I kill, I got on my knees and had my moment with him. Taking his life was a very spiritual experience for me, and I had a moment of silence, honoring him. I put my hands above his head and said the prayer I always say when taking life. “Thank you, Mother Nature, for your beautiful sacrifice. Let your spirit rise up into the sky and be put back into the cycle of life.”

After my moment, we dragged him 100 yards into the clearing where the ritualistic photo session took place. Head up, head to the side, legs under him, my hand on his back whale tale, my hands by my side. It was only after this did the real work begin, where over the next three hours we gutted and boned him, knowing every less pound of weight would make the pack out easier. Fortuitously for us, we had cell service, and prior to the field dress, our first move was to call in packers. No sooner had I carried my 150 lb. pack half a mile towards the truck than two of our hunting friends showed up. With a good 50 lbs. off my back, we trekked the remaining two and a half miles up and downhill back to the rig. Suffice it to say, I was totally and utterly exhausted by the end of it.

It was truly an immense honor to take this elk's life, for he was a brave and seasoned warrior. His back right whale tale was broken off from dueling. He had numerous scars on his body from brawling during the rut. We had to leave the top third of his backstraps because of infection from a puncture wound from another bull. His ivories were well worn. He was a true fighter who had bested countless bulls, survived brutal mountain winters, evaded droves of hunters, and spread his seed many times over. He was a warrior of the deep wilderness, a fighter to the very end. Harvesting him was the privilege of my hunting lifetime, an experience I’ll recall to my kids and grandkids, in the hopes that they can experience something as amazing. What made it all the more special was that it was a public land bull, one which any license bearer can hunt on lands owned by us all, a legacy for generations in perpetuity to enjoy.