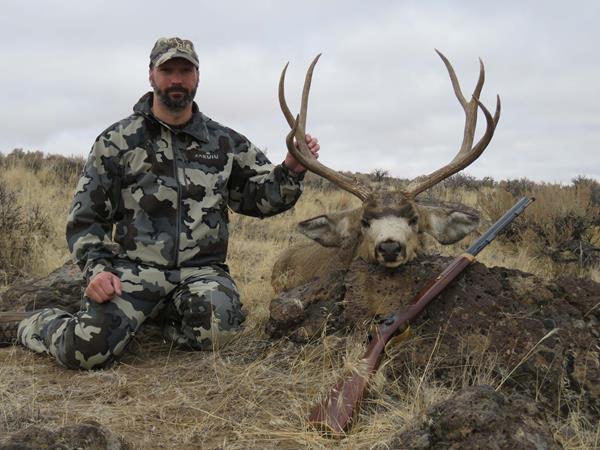 My journey started in June of 2016 when the draw results came out for Oregon. It took me 16 preference points to draw the coveted late season Juniper muzzleloader mule deer tag, which is one of the best deer hunts in Oregon. I spent the summer practicing with my dad’s traditional Lyman muzzleloader and figuring out just the right load. He insisted that I also take his TC Trade rifle with me as a backup, just in case. Armed with helpful information from fellow Huntin’ Fool members as well as a few relatives who had hunted the area in years past, I was ready for the hunt when November came around.

One thing they all told me was that the weather greatly affects the quality of this hunt. An early snowfall can move deer out of the mountains into the hunt unit; however, this wasn’t the case when opening morning finally came. For the first three days of the hunt, I spent all day glassing various ridges and drainages and wasn’t seeing any mature bucks or even too many deer at all. I decided to check out an area that my cousin had told me about that he had hunted a few years back. I spotted a few does and a younger buck. I noticed that this area had a lot of fresh sign and some nice sets of buck tracks, so I decided I would hunt there the next morning.

I showed up to the area the next morning at daylight and glassed the hillside. I spotted the same group of deer I had seen the evening before. I lowered my binoculars and noticed a couple of bucks off to my right that had just crossed the gravel road and were heading toward the other deer. One of the bucks was definitely a shooter! I stalked to within range of the buck, stood up, and fired a shot. When the smoke cleared, I saw the buck still standing there. A miss! The buck continued to head up toward the other deer on the ridge, and I reloaded the old smoke pole. Once again, I moved within range of the buck and fired another shot but had the same result. In that tall sagebrush, I had a hard time lining up my open sights perfectly on the target, plus I’ll admit, I was a little excited. I proceeded to load another round into the gun, but after firing two shots and not swabbing the barrel, the bullet lodged itself halfway down and was stuck. I mean really stuck! I could still see the buck up on the hillside, but he was a good 300 yards away by now. I had no choice but to hike back to my truck and try to figure out a way to get another opportunity at that buck.

I marked the area with my GPS and drove up the road about half a mile, completely out of sight of the hillside the deer were on. I put the Lyman away and grabbed the backup muzzleloader. I checked the wind direction and started hiking toward the backside of that ridge where I had last seen the buck. It took almost an hour to get to the spot that my GPS showed was directly behind the ridge where I had last seen the buck. Just then, I spotted him about 100 yards away. I raised my gun, found the buck in my peep sight, and fired a shot. This time, I connected and the buck didn’t go far before expiring. I walked up to take a look at my buck up close. He was everything I was hoping for - a nice frame and good mass, easily my best buck to date.

Fast forward almost a year to November of 2017. After having no luck in drawing any tags, I decided to plan a late season whitetail hunt in the Idaho Panhandle. I had done this hunt many times before and shot some really nice bucks; however, it had been five years since my last trip there, so I didn’t know what to expect. I also had a late season archery tag in Oregon going on at the same time. My wife and kids were going to accompany me on this trip, and we planned to leave on Sunday. My wife asked “Why not Saturday?” I told her that I wanted to hunt blacktail deer with my bow on the opener of the late season. She shook her head but agreed to it. One other thing was that my extended family agreed to hold Thanksgiving dinner a week early to accommodate our Idaho trip, so I had to be back home from my local blacktail hunt for dinner at 3:00.

That morning, I headed up to some timber on BLM land that borders some clear-cuts. I headed down a trail and noticed a lot of fresh deer sign and some rubs. I made my way through the timber and spotted a buck cruising along the edge of a clear-cut. I put a stalk on him and was only able to get within 50 yards before he spotted me. I drew back my bow and let one fly. I could tell that I had made good contact. The buck only went about 60 yards before piling up. He was a decent 3x2 blacktail, and I was very happy to take him with a general season bow tag. I called up a buddy to help me pack him out, and I was able to make it to dinner easily by 3:00.

The next morning, we headed to Idaho. A 10-hour drive can be quite entertaining with a 2-year-old and a 4-year-old, and it can be frustrating at the same time, but I was glad to have them along. I headed up to my old hunting grounds the next morning and parked at my favorite gate. It was pouring down rain. I spotted some elk and a few does and decided to sit and watch an area that had produced in the past. Twenty minutes later, a nice buck emerged from the timber. It was raining so hard that my rangefinder wasn’t giving me a good reading, so I had to guess the yardage. I got out my shooting sticks and fired a shot. I couldn’t tell if I had hit him, so I hiked down there to inspect. I didn’t see any blood, but I found a bunch of hairs. I looked around for a few hours, but there was no sign that I had done anything but give that buck a haircut.

The next morning, I headed to the same area but didn’t see any animals after hunting all morning. At around noon, I headed back to my truck to grab a sandwich. All of a sudden, a huge buck stepped out in front of me at about 20 yards. He saw me as soon as I saw him, and he bolted. I quickly got my gun up and fired a shot as he disappeared into the thick timber. I didn’t know if I had hit him or not until I walked up to find him lying there with a lethal shot to his neck. He was my best whitetail with 13 measurable points on his rack. I headed back to the hotel that evening and got to show off the buck to my wife and kids.

I told my wife, “Do you realize that in the last calendar year I have shot a mule deer, a blacktail, and a whitetail with a muzzleloader, a bow, and a rifle?”

She agreed that it was an interesting feat. I told her all I needed to do now was shoot a Coeus or a Sitka with a pistol and it would be some sort of a slam. I’m not quite sure if she understood what I was talking about, but I know she was very happy for me and my success in the last few seasons. All three of the hunts were self-guided on public land, and I was hunting by myself, which has always proved to bring me the most success. However, I wouldn’t be able to enjoy such success without the support of my family, close friends, and the helpful staff at Huntin’ Fool.