A Fib Within the Truth 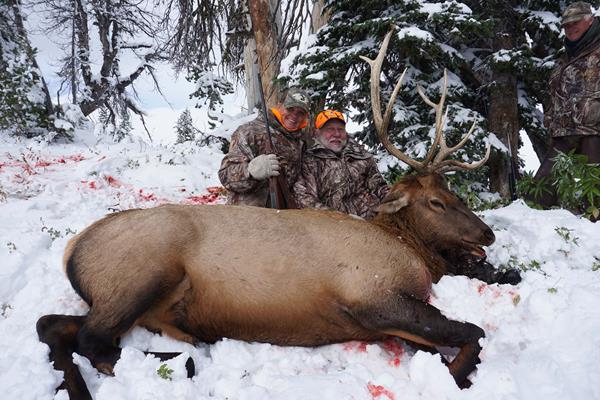 My wife, Dawn, and I had last elk hunted in Wyoming’s Teton Wilderness in 1994 during the last week of our three-week honeymoon, and we both took 6x6 elk. Elk hunting was then put aside as we moved into our respective careers, had children, and pursued their baseball games, gymnastics, and swimming. However, elk hunting still tugged at Dawn and me, so we diligently purchased preference points for our next “someday” elk hunt.

That year came in 2017, and we wanted to hunt the Teton Wilderness again with the first day of our hunt being opening day of rifle season, September 20th. The elk would no doubt be in rut, and temperatures would also be much balmier than during our 1994 late October hunt with its 10 inches of snow.

The plan was for me to drive, leaving Mississippi on Saturday, and head to Jackson, Wyoming with our gear. Dawn would fly in to Jackson the following Monday afternoon. The horseback ride to camp would begin the following day. The foregoing went well, and I met Dawn at the Jackson airport at 2:40 p.m. on Monday. We were hungry, and while she settled for fried pickles, I, a poultry veterinarian, opted for the chicken wings. Within an hour of consuming the wings, my cast-iron stomach began to churn and I figured I was in trouble. Still, we met the outfitter the following morning and drove 50 miles north, whereupon we loaded the packstring and began our 24-mile ascent into the Teton Wilderness amid alternating rain, sleet, and snow. By noon, there was no doubt I was in trouble. We arrived at camp at about 4:30 and set about unloading the horses and placing our gear in our assigned tent.

The following morning, we were greeted by six to eight inches of snow and a landscape reminiscent of our late October 1994 elk hunt. Dawn, the outfitter, a guide, and I left camp before daylight, and by 10:30, I had begun to feel hot. Hypothermia began to set in, which was complicated by repeated bouts of diarrhea. We built a fire, which we enjoyed until 3:30. Fifty yards from the fire was a rim above a snow-clad bowl of mixed aspen and spruce. We eased to the edge and let several soft cow calls and bugles filter down through the terrain. No verbal response greeted that effort, but within a couple of minutes, an antlered bull could be seen in the distance making his way toward us. Dawn looked him over and decided to pass on him, but my thoughts centered on the fact that this may very well be my only opportunity as I doubted I would be able to leave camp if I didn’t have a major gut turnaround. At 130 yards, I took my opportunity and harvested a fine 4x5 bull. We quickly gutted him, covered the carcass with spruce branches, and tied the head high in a nearby spruce tree before beginning our three-mile trek back to camp.

The next morning, only the outfitter, guide, and wrangler left camp to retrieve my elk. The snow blanket overnight had doubled to 16 inches, and snow was still falling. By the third day, a full 28-30 inches of snow blanketed our campsite and nobody left camp. On the fourth morning, the skies were clear. No additional snowfall had occurred, so all hunters except myself took to the field. However, by the end of the day, no elk had been seen and few tracks had been noted. The fifth morning began pretty much like the preceding morning, and as darkness fell, Dawn and her guide were the first to return to camp. She found me at our tent and began to relay her day’s story.

Dawn said nothing had transpired during the morning hunt, but after lunch, they had begun to note more tracks. At around 4:00, they stopped on a high knoll overlooking a spruce thicket of perhaps five to six acres. The guide threw a few light cow calls and an occasional bugle in the direction of the thicket. A bull answered and appeared shortly from the thicket, headed in their general direction. Stopping within 45-50 yards of her position, the bull bugled, and with her gun braced on an aspen limb, Dawn shot. The bull took a couple of steps and then expired. She had done well in passing the bull I had ultimately shot as the bull she took was a solid 6x6.

By the end of the hunt, no other elk had been taken while I had retained my intestinal malady. The morning afterward, we descended using the same 24-mile trail ride as when we had arrived. The following morning, I took Dawn to the Jackson airport. I loaded up on Imodium AD and yogurt and then began my travel toward Nucla, Colorado as I had also drawn one of the six highly coveted non-resident unit 61 bull tags. With four days before the October 1st opening day, I figured I could cure my intestinal bug and be ready for a great elk hunt.

Arriving in Meeker, Colorado, I checked into a motel around dark and retired to bed at 8:00, but sleep did not come and gas had distended my abdomen. I thought that the following morning I would go back a couple of miles to the Pioneers Medical Facility I had noted upon my arrival in Meeker. At daylight, I went to the medical facility and they diagnosed my intestinal malady as presumably “beaver poisoning” because I, along with eight others in our Teton Wilderness camp, had drunk water from the closest stream, although I alone had developed a malady. In my mind, there was no question it was not beaver poisoning, rather it was associated with the wings consumed 10 days prior. I was also diagnosed with atrial fibrillation (A Fib), a possible small intestinal obstruction, 88 and was told I needed to be in the larger hospital some 70 miles distant in Glenwood Springs. I got up to drive myself there but was quickly told it would be against medical advice. Eventually, I was coerced into an ambulance transport.

I spent the following six days, including the opening day of the unit 61 first rifle hunt along with three more, in the critical care unit of Valley View Hospital in Glenwood Springs. Gone were my 23 preference points, my tag, my opportunity for a Colorado trophy elk hunt, and 12% of my body weight. On the other side of the ledger, my A Fib was characterized, and while three cardioversions (cardiac shocks) were administered without success, a pharmaceutical regimen was outlined. My intestinal malady was defined and diagnosed – enterotoxigenic E. coli infection. The intestinal blockage was ultimately ruled out, and upon discharge, I drove the 1,650 miles back to my home over the course of three days.

Perhaps my elk hunting days have passed me by, but I still have 17 preference points for Wyoming moose and I am now on a first name basis with my cardiologist.

Also, Colorado restored my 23 elk preference points in early 2018 and my cardiologist instructed me to stay at low altitude for the duration of 2018. However, a Colorado elk hunt in 2019 is a possibility!