Too Good To Be True! 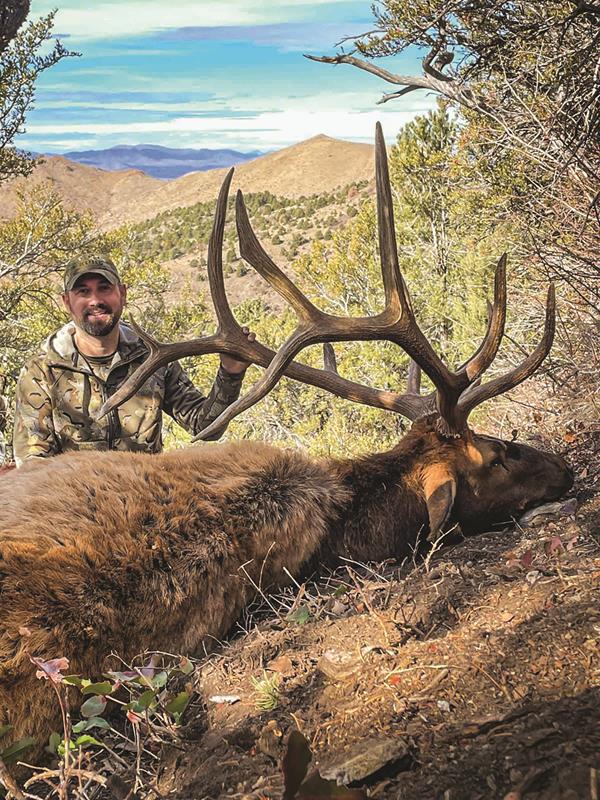 While enjoying the first day of a much anticipated and overdue family vacation, my cell phone rang. Of course, I didn’t answer because, well, I was on vacation! However, when the same number rang a second time, I figured I better pick up. Turns out it was Austin Atkinson from Huntin’ Fool letting me know I had won the elk hunt in their Membership Drive. I would be hunting Nevada’s unit 231 with White River Guide Service. First vacation since Covid and my first elk tag? It all seemed too good to be true!

White River Guide Service’s owner, Wade Ovard, and I hit it off over the phone, and before I knew it, November was here. I met guide Clint Hess in Pioche, Nevada. Wade was set to join us a couple of days later as he was in a neighboring unit finishing up with a successful client. Always wanting to be fully engaged and not just led around the mountain, Wade and Clint were perfect. They treated me like a longtime hunting partner. We made hunt plans together, and I always knew what was on their minds. It was a master class in all things elk hunting, and I was their eager student with 101 questions.

Over the course of several days, we saw a lot of bulls and I passed on some good ones. I was enjoying the experience and the scenery too much to rush it. With only three days left, though, it was time to get down to business and be realistic. Just after first light, Clint spotted three bulls in a valley, and there was a nice 6-pointer in the bunch. Clint stalked along a hillside to get in position. About 400 yards out, the hillside started to turn away from the elk, so we could not get closer. We found a mostly flat piece of dirt and started to set up for the shot.

Just as I was getting behind the scope, a truck came barreling down a farm road below us. As it passed, the driver looked up at us but didn’t so much as tap the brakes. He crossed directly between us and the elk, though below us on the flat. Apparently, common courtesy and sportsmanship was no obstacle to that guy. Surprisingly, the elk did not immediately bolt as the bouncing headlights approached. They seemed to disagree about which way to run as they started one direction and then another. At about 100 yards out, the driver jumped out and shot the smallest of the three bulls across the hood of his truck. We had no words. Clint and I silently picked up our stuff and walked away.

Hunting on the heels of that experience didn’t feel right, so we headed to town for breakfast and a reset. After seeing only a couple of other elk hunters all week, I couldn’t get over the bad timing and bad luck. All I could think was, “That’s public land elk hunting for you.” However, I was undeterred and knew Wade and Clint had more tricks up their sleeves.

That evening found the three of us on a remote hilltop. After watching all directions for an hour or so, Clint spotted some motion and threw up his binoculars. All he said was, “Shooter,” and I could tell he was excited. Within a few seconds, he had the spotting scope repositioned and I peered through the lens as the bull inched out of the tree line on the opposite mountain face. This bull was exactly what we had been looking for and was even bigger than the bull from the morning.

Light was fading fast, and a sense of urgency fell over us. I asked the obvious question, “How are we going to get closer?” After a long pause during which we studied the landscape, Wade broke the silence, “We aren’t. You are just going to have to shoot from here.”

Until then, it had not occurred to me that shooting from where we stood was even an option as the bull looked a long ways off. Wade was right, though. The topography was such that it would be impossible to close any distance without an hour and a half hike around the backside of the mountain the elk was on, which there wasn’t time for. As I stared across the vast canyon, out of the corner of my eye, I saw Wade lower his rangefinder. “593 yards,” he said. Yikes! While I had taken a handful of animals at over 300 yards and one unlucky antelope at 450, nearly 600 yards was something I had only rehearsed.

Still not convinced I would be able to calm my nerves enough, Clint and I got to work constructing a shooting rest for the slightly uphill shot. After leveling a patch of shale and nesting a couple of backpacks, I was prone and behind the rifle. To my surprise, the crosshairs were steady. As the bull cleared a small tree, I put the appropriate reticle hash on the front part of his chest, let out a breath, and applied gentle pressure. The trigger broke. “Perfect height but just behind him,” Clint said. I had underestimated the right to left wind cutting through the canyon. I moved my aim a little further over and sent another round. The sound of a solid hit echoed back. “You got him!” yelled Clint.

The bull ran a few yards to the right and then back left before finally crashing into a patch of cover. Brush obstructed the view, but we could see some periodic movement through the dense foliage. We watched intently as darkness fell, but he never came out or gave us another shot. Not wanting to rush in and bump him, we elected to back out and wait for morning. It was a sleepless night for this first-time elk hunter!

A little after daylight, Clint found the bull stone dead just a few yards downhill of where we had last seen him. I was elated! Kneeling next to this magnificent animal, I was overcome with emotion. Unfortunately, the bull had come to rest on a steep slope with his midsection wrapped around a tree, but even that couldn’t curb celebrations.
It took some hand excavating and then all three of us tugging on a makeshift pulley to get the bull unstuck. Breaking him down while standing on a 35-degree slope was no peach either. Thankfully, the pack out was all downhill. Clint stuffed both hindquarters and a bunch of other meat in his pack and then tied the head and horns on top. It was a “beast mode” move that anyone who has hunted with Clint will understand. Thanks to him, we managed to haul everything off the mountain in one trip.

I have to thank Wade and Clint of White River Guide Service for the hunt-of-a-lifetime. Without their help, knowledge of the area, and confidence, I couldn’t have done it. And a big thanks to Huntin’ Fool for making these hunts possible!