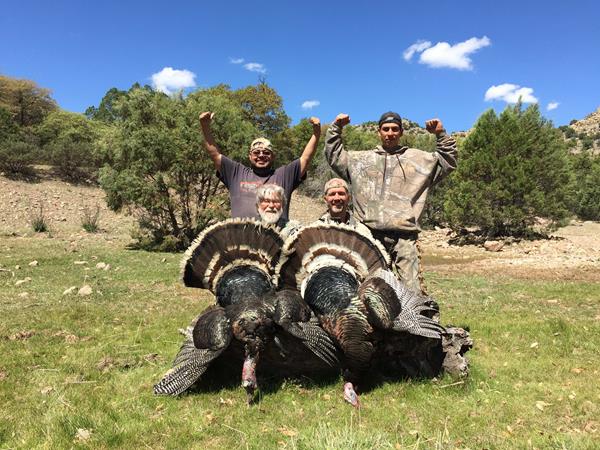 Have you ever won anything in a drawing? Me neither until the day I decided to watch Huntin’ Fool do their Facebook livestream for their Summer 2018 Membership Drive. They actually said live on Facebook, “Lance and Abby White for the Mexico Gould’s turkey hunt for two with Wade Lemon Outfitters!” I could not contain my excitement. I invited an elk hunting buddy I had met in Arizona through the Huntin’ Fool Member Draw Database to go with me, and he gladly accepted.

On April 21st, I was greeted at the Tucson, Arizona airport by our driver, Manuel, my hunting buddy, Bob, and two more hunters and a videographer. We were going hunting with The Bearded Buck hunting show professionals, Jerry and Chuck, who were creating an episode for their Outdoor TV Channel show!

After a drive to the Mule Mountains, we immediately started hunting for the infamous Gould’s turkey. None of us connected on a turkey that day, but we were hearing gobbles, so there was plenty of hope and excitement.
Bright and early on April 22nd, I found myself in the dark along a creek bed with my guide, walking under 15 hens and a gobbler in the dark. We experienced a lot of gobbles and yelps but were unable to get a mature gobbler within bow range that morning. That evening, we set up in an abandoned 150+ year old adobe hut as a blind, but we were still unable to get a gobbler within bow range. We put two different gobblers to bed that night, marking each of their roosting tree locations.

On April 23rd, the pressure was on as this was the last day of the hunt. We went to a new area about 45 miles away and walked into a creek bed that backed up to a large hillside. Immediately, we were getting responses to our calls, so we set up with great anticipation. Within 30 minutes of sunrise, three turkeys hurriedly rushed into our hen calls as I drew my bow back. Once they were 15 yards from us, I was able to identify them as hens and let my bow down. Just as the hens started to wander off, the “boss hog” gobbler rushed toward us, and with his head behind a tree, I drew back. I held for as long as I possibly could while he was at 22 yards. I just needed him to move five feet out of the way of a few twigs, which he did but in the wrong direction.

Daniel, my guide, looked at me with frustration in his eyes and said, “Dispara waholote con escopeta, no arco,” knowing that it would have been an easy shot to take that bird with a shotgun. I smiled and said, “Si, por supuesto!” We took off after this fired up gobbler, and after about three dozen more ground rumbling gobbles, I finally shot the gobbler with a shotgun at 25 yards.

He was a 21 lb. bird with an 11" beard and 3/4" spurs that scored 58. This scored him as one of the best birds killed out of that area this spring. Even more interesting was the fact that he had a split waddle. Also, my friend, Bob, whom I brought on the hunt got a large gobbler. Thanks so much to Huntin’ Fool for making this hunt possible for me and my Huntin’ Fool buddy!