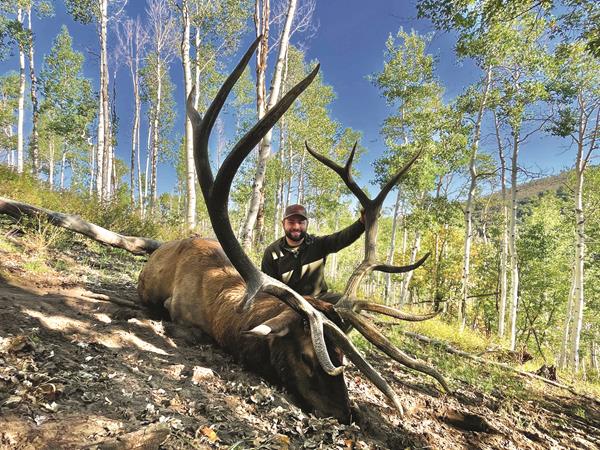 This was the luckiest year of my life, and it just kept coming. The story starts with my friend at work, Steven Swope, introducing me to Huntin’ Fool and telling me about all the awesome things they do. The one thing that grabbed my attention was the monthly Membership Drive. He told me he’d been doing it for three years and hadn’t won anything. I signed up for a membership to get the magazine and bought a few entries but didn’t win anything. I asked him how many entries he buys, and he told me he only ever buys one because, “If you’re lucky, you’re lucky.”

The next month, I bought one entry for trophy elk in Northern Utah. I then received the phone call that started it all. I was speechless! I couldn’t believe it. Of course, I had to call Swope first, and man was he pissed! Yet, he was happy for me at the same time. There was only one problem, I didn’t have a rifle for elk. I shopped around for a month. Then Swope texted me a link to Christensen Arms 25th Anniversary Giveaway and said, “Just win this.” The grand prize was a 25th Anniversary Christensen Arms Travers in .300 Win Mag with a Leupold VX-6HD on it and a custom SKB travel case. I figured, “You know what, you miss 100% of the shots you don’t take.”

I spent the whole month partaking in the contest, doing all the social media stints they asked. The following month, I received an email from the Christensen Arms Marketing Team telling me I had won the grand prize rifle. I thought it was a scam email at first, thinking no way had I won this rifle. Turns out, I was wrong. I had won, and now I had a rifle for my elk trip. I called Swope, my adrenaline still pumping, to break the news to him. I was convinced I had used up all my luck, but I told Swope that now I just needed to win some cash to help pay for the trip. I bet you can’t guess what I did next. I saw that Sportsman’s Alliance was doing a raffle too, so I tested my luck with one ticket. I received an email that next month saying I had won $500! I was convinced all this winning was a sick joke in a dream I was having. While talking to Swope, I told him it was his turn to win a trip, and he laughed. Well, that month’s drawing, he did just that and I watched it live on Instagram. Swope was drawn for a 2022 Alaska Dall Sheep trip!

The year passed by, and it was time to head to Utah. After a long 24-hour drive from Ohio, I made it to the outfitter’s beautiful cabin that sits on a huge lake. The outfitter was J&J Outfitters. I arrived at the cabin and met the chef and two of the coolest guys, my guides Brant Beckstrand and Ricky Bangerter. We decided to head out and look for some elk that evening. I was beyond excited because I had never seen or heard an elk in person, only on TV and YouTube. We ripped Can-Ams across steep cliff sides and set up to glass. As soon as we stopped, I could hear them everywhere. It sounded like Jurassic Park, as if I were surrounded by dinosaurs in every direction. I could hear at least 10 bulls. We set up to glass, and I spotted my first bull working his cows right up the hillside towards us. He was huge, and I was mesmerized. My guides continued to tell me, “Dude, that’s a big bull.” The bull got closer and closer, and I could tell my guides were waiting for me to say something. They informed me that it was easily a 350"+ bull, but I just couldn’t do it. I told them it would be wrong of me to shoot the first bull elk I’d ever seen in person, so I had to pass. Observing this beautiful animal walk within 45 yards of us and my guides standing in shock is a moment I’ll never forget. As the evening moved on, we looked at so many 6-point bulls that I lost count.

The next day, we headed out early in the morning to a different ridge. Just like the night before, there were elk everywhere, and I mean everywhere. Moments later, I heard Brant say, “Big bull!” We gathered and found him in the spotting scope. Brant was correct, he was big. I liked him, but I was struck by the fact that it was only the second day. There was a bull in some thick pines down the ridge that was bugling twice as loud as the one we were staring at. Between my interest in the loud bull in the pines and it being only my second day, I passed on the bull. I could sense a little confusion from my guides.

We continued to hunt the rest of the morning and that evening. When we got back that night for dinner, my guides informed me that they got a picture of the bull I had passed on with the cell cam. They showed me the picture, and I was pissed at myself for passing on him. He was huge with long, straight fronts that curved slightly outwards past his nose. After seeing the picture, I told my guides I wanted to go after that bull.

The next morning, we went right back to where the bull was. We arrived early in the dark and set up on a hillside of sagebrush. Right when the sun lit up the ridge, there he was, just 50 yards from where we left him the day before. There were some difficulties getting set up for a stable shot as we were on a steep hillside with sagebrush between our feet. I made the quick decision to lay down. I’d never been so uncomfortable yet stable at the same time. Laying downhill was not the best idea since blood was working its way to my head as we chased the bull in our scopes. The bull worked his cows left and right while pushing off other bulls. After what felt like an hour, he finally stopped in a clearing. My guides gave me a dope of 10.5, and I adjusted my turret without thought. I found him in my scope as I followed him through a clearing and dialed in my magnification. I lined up my shot, released half a breath, and pulled the trigger. With my ears ringing, my guides said the shot went over. I chambered another round. My scope was immediately back on the bull but a tad low this time. I sent a shot right into him, and he dropped like a rock, sliding down the hill. My heart was beating hard, my ears were ringing, and I felt disoriented from laying down the hill for what felt like an hour. Upon getting up, my guides informed me that I had made a great shot at 600 yards. I couldn’t believe it! With my adrenaline still pumping, I didn’t even process what my 10.5 dope was as I turned my turret. I was shocked, impressed, amazed, and filled with different emotions.

We worked our way down the hill and up another steep hill of tipped over aspens. We finally made it to the bull. He was bigger than I expected, and I couldn’t believe the amount of mass he had as well as his 20"+ G1s. After a heavy pack out and driving back to the cabin, the guides were eager to put a tape on the rack. After a long and strict measuring process, he scored a massive 373 4/8". I still couldn’t believe this wasn’t a dream.

This story will live with me forever. I can’t thank everyone enough who was a part of it. Thank you to Huntin’ Fool, J&J Outfitters, Isaiah Joner, Christensen Arms, Brant Beckstrand, Ricky Bangerter, Steven Swope, DJ Petit, Steve Michniak at Southington Hunt Club, and Sportsman’s Alliance.