Long Gone to the Yukon 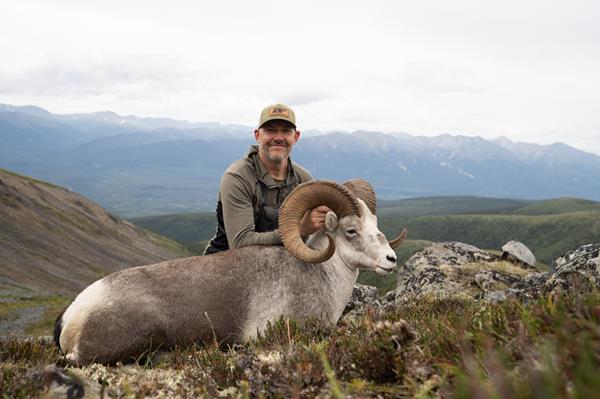 You might think this short story is about the luck of drawing the Stone sheep hunt in Huntin’ Fool’s Membership Drive. You’d be partly right, but the real luck of the draw was being part of “Team Alpha.” These three men and a dog took the hunt-of-a- lifetime right off the charts when compared to everything I’d experienced so far.
It was the spring of 2019 when Huntin’ Fool pulled the ticket for the grand prize Stone sheep hunt. The twist was that the winner actually wasn’t me, but my wife, Lisa! I didn’t know she had even entered the drawing. I was truly excited for her, but she quickly corrected me and said that I was the lucky one who got to go. She knew how much I wanted to go on a Stone hunt, and she had been entering drawings here and there on my behalf. In the end, I know that God had a plan for us, but I owe my wife the ultimate thanks for such an incredible gift.

The stage was set for the hunt to take place mid-August of 2020. That was plenty of time for me to prepare physically and mentally for such an incredible opportunity. When March rolled around and the Covid bomb dropped, I was devastated! I know we all have our sob stories about it, but if you’re reading this article, you know what sheep hunting means to “us” and to get this chance and now have it taken away was a real gut punch. I was convinced it wasn’t going to happen at all.

Even with some renewed hope in 2021, I had written the hunt off and focused on other plans. Then, on my luckiest day, July 19th (my wedding anniversary), Canada announced they were reopening the border with the United States for travel. I heard from Don at MacMillan Adventures not long after, and we began the scramble to get all the logistics worked out for the hunt slated for August 15th.

Fast forward through the next few weeks and it was time to get on the plane. I held my breath for the next 16 hours until we landed in Whitehorse. I grabbed my checked bags and finally exhaled. Maybe this was really going to happen after all!

I got a phone call from Huntin’ Fool asking, “What do you think of us sending along a guy to video the hunt?” Well, now it just went over the top on the stress scale! I really wanted to share this hunt with my family and friends, but that added so much mental burden to an already mentally tough hunt. I was really excited about the opportunity but not crazy about adding more weight to an already heavy load. I didn’t want to let anyone down. Enter into the story Brady Harang, media producer for Huntin’ Fool. We had talked over the phone and shot a few text messages back and forth, but we didn’t meet in person until we crossed paths at the Vancouver airport. He’s been on many hunts before and I’d seen most of his videos, so I knew this wasn’t his first rodeo. For being such a young guy, I was quickly impressed by his wealth of experience and maturity. Brady was exactly what I needed! But he wasn’t just a camera guy, he was always ready to pitch in and get his hands dirty. He never rested unless we all did. Because of that, Brady is also now known as the cameraman, spotter, packer, chef, DJ, and much more for Team Alpha.

After a short flight from Whitehorse to a remote, soggy runway in the middle of nowhere, we were welcomed into base camp by a great crew. We got acquainted over a cup of coffee. Cam Fox was our leader and guide. Will Goyette (and his sidekick Bandit) was our wrangler and backbone for the team. We were in good company, and that combination felt lethal.

The next morning, we awoke and got acquainted with our routine of saddling and packing the horses. We set off through the land of brush and swamp. This is where the value of the horses became obvious. I was thankful to have such good stock working for us, and I give Don and his whole crew a ton of respect for getting them there so we could have that advantage. About eight hours southwest, we stopped off at Junction cabin, a welcome surprise. It was a huge asset to have if we needed to regroup later in the week.

The next day, we woke up to the same routine with the horses and headed off for sheep country. The next mountain to climb was steep. It was a tough stretch of almost vertical switchbacks where fate was about to test our resolve by rolling a bone-crushing boulder down the hill through the middle of the string. Tumbling erratically, I saw it thundering down toward me. It banked off a downed tree and narrowly missed Faro’s rear legs. It now aimed sharply at the mule. I could see it all in slow motion. The mule didn’t have a chance to even flinch. It shot right under him too and didn’t leave a scratch! I quietly thanked the Lord, and we collected ourselves.

We arrived at spike camp and set up at the base of the Mt. Intimidation. We arrived late, so we went to work and got the horses unpacked as quickly as possible. Will still had to make the trip back down the steep hill with the whole string of horses by himself and in the dark! He would hole up with the horses at the cabin at the base of the mountain.

With great anticipation for the first official day of sheep hunting, we awoke the next morning to rain and heavy clouds. We knew we weren’t going to sit around in camp all day, but there was no rush, so we had some breakfast and took our time putting on our cold, wet boots and raingear. Up the mountain we went, and we were super careful not to bump something on the way. We found no clear skies, so back down the mountain we went for one of many freeze-dried meals and great camp company.

Looking at the weather forecast, the next couple days would be our window of opportunity. It looked almost certain that we would get socked in for several days after that, so we agreed to hit it hard the next day and cover ground while we could see. We made a plan and sent an InReach message to Will, “Weather looks good tomorrow. You should come up and hunt with us!” Team Alpha was up for a big day.

The next morning, we awoke to clear, blue, beautiful skies. We set out to finally see the mountains before us and get a better lay of the land. Cam led the charge, and along the way, we found a big group of ewes and lambs and a lot of sign but no rams. It was good to see the sheep and even better to see such a good ewe to lamb ratio. We were quite concerned the winter may have been really hard for them. Record snowfalls the previous winter left us wondering if the old rams survived.

We woke up early and headed up the mountain again. We knew the weather was coming, so Will stayed back with the horses. We knew from the previous day where we’d likely find the sheep if they were there, so we set up and glassed the mountain called “Volkswagen.” We were focused on the south side, but Cam had a gut feeling they were on the north. He’d stuck to his playbook from day one, and I respected that. We packed up and pushed over. Then he saw them.

Three rams! Cam had first eyes on them. They were coming out of the trees below us. With some time, there were three more. As they worked their way up, it was evident there was a definite leader among them, and he was magnificent! This mature, old ram was all that I had hoped for. It was on!

We had them at 800 yards as they bedded below us. We knew we needed to close the distance, but traversing the boulders was going to be tricky. There were a couple grassy patches among the boulders, so we made a plan to drop our packs and slither down to get closer as their backs were turned to us. We set up on the steep grassy area as they rose from their beds and continued feeding along t he mountainside. I dry fired a few times to calm the nerves. The adrenaline was pumping, and my mouth was so dry. Then, they dropped out of sight. My heart sank. Was that my missed opportunity? I quickly cleared the thought and refocused. I was ready, and everything was in our favor. The weather was holding for now. We had time.

We used the opportunity to close the distance even further. We got set up on the next grassy area below, and it wasn’t long before they climbed up out of the ravine one by one, feeding up the drainage to the left, coming right toward us. I was ready and steady. Finally, the mature ram came into full view. I confirmed the yardage with Cam and then squeezed the trigger. Whack! The shot felt good, but the ram disappeared immediately as he fell back down the drainage. I reloaded and was ready for a second shot, but he was nowhere to be seen. Both Cam and I kept watch while the other five rams stood not far off, looking back. Then it was Brady’s time to shine as the confident voice from behind us confirmed, “Oh yeah, you got him!” He had it all on video.

Let’s go get him! I wouldn’t let myself rest easy until I put my hands on the ram. We collected our things and made our way down through the boulders. There he was! I was overwhelmed with emotion as I knelt beside him and placed my hands on his body, giving thanks. I thanked the guys for their help making it happen. We had to send a message to Will and let him know. This was a total team effort. I firmly believe I would not have been successful without them. The same was true for my wife and family. It was a wonderful feeling to send that InReach message to them, saying, “Big Ram Down!”

Tomorrow we would celebrate with the whole team when Will rejoined us. He deserved this as much as any of us. I fell asleep with the familiar sounds of rain on the tent and the rushing water in the stream nearby. I will not forget that day, and more importantly, these people for the rest of my life.