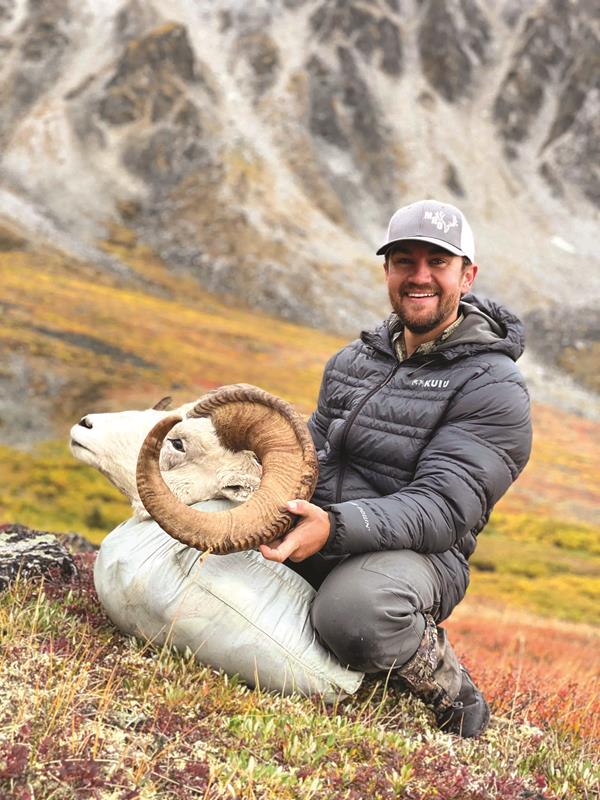 Late June 2020, I received a text from my friend, Baelin Borg, telling me about the Huntin’ Fool Stone sheep raffle. With the same mindset as every dude reading this, I thought there was no chance I would win, but I would buy an entry and see what happened. My obsession with sheep hunting started back in 2014 when I first glassed up rams in my home state of Arizona. Since then, I could not get enough of them. I have seen every YouTube video known to man on sheep hunting and eventually made my way onto a handful of hunts and getting even deeper into the sheep world. Over the years, Stone sheep really stuck out to me the most of all four. The beauty of the animal and where they live was unlike any other place.

Fast forward to July 6th as I was driving home from California and visiting my mom and I got a call from a Utah area code. At this point, nothing clicked because who wins raffles in the first place? I will never forget picking up the phone and Austin asking me if I’d ever killed a sheep. I told him no, not yet, but someday I would kill my slam! That’s when he told me I had won a Stone sheep hunt in the Yukon Territory. It took everything in me to not have a heart attack and crash my truck on the interstate. Never say never! After the wild phone call, I called all of my sheep hunting friends.

The wait was on. Covid had been going on for about six months, and Austin said the hunt was booked for August 2021 but may get bumped due to Canada’s strict rules during the peak mess of Covid. I used this time to get myself in better shape and keep my mind busy. I probably watched every Stone hunt on YouTube a hundred times, read about backpack gear to buy, and talked to a lot of experienced sheep hunters online, whom I can’t thank enough.

In July 2021, I got an email from my outfitter asking if I could make it up to the Yukon in late August. The clock was ticking! I spoke with Don Lind at MacMillan River Adventures, and he assured me I’d have a great hunt. He was ecstatic to hear I was only 28 years old and a sheep guide myself, so I knew what was ahead. The last four weeks were the longest. My dream hunt was almost here, and it still didn’t seem real.

After multiple flights, I finally made it to Whitehorse from Phoenix. I met Don and some of his guides over dinner my first night, and we went over the plan for the morning. We would be flying into the bush at 9 a.m. after loading the plane. Seeing the plane and loading supplies, I finally felt the rush that it was really happening. After about an hour flight over the Yukon Territory, we made it to base camp where I met all the boys – Garry, my main guide, Tyson, my subguide, and also the horse wrangler. Base camp was nothing short of epic and what you picture in a horse camp. After settling into my bunk for the night, we had a game plan made up. The next morning, we would saddle the horses, load the food and gear into the panniers, and ride all day to the next cabin where we would stay one night and then have a two to three-hour horse ride before we started backpacking. The guides were incredible, and we got along great immediately.

The first morning of the hunt, it took a while to get the horses fed and packed before we rode. Each team had a string of 11 horses, so teamwork was key in getting things moving. Finally, we were off horseback riding through the most beautiful land I have ever seen. A very long horse ride through creeks, canyons, and mud bogs made for an exhausting day, and we were all ready to make dinner and get some rest before the big day tomorrow.

The second morning, it was the same move, get the horses packed and we ride. This time, it only took about three hours. We were in sheep country, and I actually glassed some Stone ewes off the horse before our final destination. We removed the backpack gear, panniers were loaded up, and off we went. I was Stone sheep hunting the Yukon Territory at last. We went about three or four miles before we dumped our gear and set up camp. At this point, our day was eaten up and we sat around the tent, enjoying a Mountain House and speaking highly of what may come this next week.

The following day, we woke up early and headed out. The range we hunted wasn’t very long. It consisted of four big basins. We would take our time glassing each one carefully, picking apart each shale ledge and snow patch just in case a ram was hidden somewhere clever out of sight. We spent the whole day hiking the range but did not turn up a single ram, just a handful of ewes. Weather rolled in, and for the next two days, we had horrible winds and it rained on and off, resulting in not seeing sheep. A part of me got nervous. With a year of sheep hunting and guiding under my belt, I reminded myself that sheep sometimes just appear and they could have easily been tucked off in the timber during the storms.

On September 3rd, my guide, Garry, and I left camp together to hike up to the first big basin. We set up glassing, and after about 20 minutes, I glassed up what ended up being my ram and absolutely lost myself. I saw multiple sheep and immediately ran to Garry. We spent the next hour and a half watching the five rams and seven ewes work their way down the basin to the bottom to get a drink. I couldn’t believe what I was looking at. The most beautiful ram in North America was in my spotting scope, and I had a tag in my pocket. I made sure to live in the moment and take in all the views and emotions I felt.

Finally, we had our chance to slowly move down the basin while the rams were out of sight. I set up on a big, flat rock, got a steady rest, and practiced dry firing. The rams were bedded facing away. My dream was in my riflescope. I had one shot to make this count.

Thankfully, waiting a long time, my nerves calmed down. My ram stood up. Garry said, “Wait until he’s away from the other rams.”

I patiently held the crosshairs on him at 535 yards. My ram stepped out. Boom! I heard the bullet hit him, and as I looked back in my scope, I saw my ram standing there stunned, facing away, no clear shot. The other rams took off running. My ram then bedded down and tipped over. Garry and I could not believe what had just happened. We both high fived and hugged one another. It took us about an hour and a half to get to him. I will never forget walking up on him, seeing his gray, black, and white cape. No words can express how grateful I was and still am today. We spent a while taking photos, admiring his horns, and talking about the stalk. Then the work began as the storm rolled in. We jumped into raingear and caped him out.

From the bottom of the basin, it was a straight hike up the mountain, and I couldn’t wait to suffer! A big stone ram, his cape, and meat were split between us. It’s a moment I’ll never forget.

We woke up that next morning happy as can be as I messaged close friends and family on my InReach that I had fulfilled my dream hunt in the Yukon. We packed camp up, loaded our already heavy packs, and hiked out to the horses and wrangler. This is a trip I will never, ever forget. I miss my Canadian bros!

It’s hard to really express how grateful I am for all the hard work the guides put into my hunt, even though we still all talk to this day. So much more happened on my hunt, but it’s hard to put it all into words. Thanks to Don Lind of MacMillan River Adventures for such an awesome team and outfit. Most importantly, thank you to Huntin’ Fool for picking me to hunt Stone sheep. Never say never! I won the hunt, and so can you!