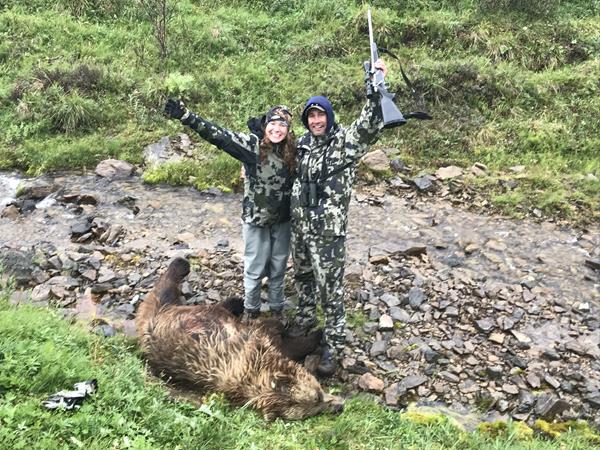 Ever since I was a little girl, I’ve found so much joy in hunting. My dad would wake me up at 5 a.m. to go out and watch the big whitetail buck come curiously out of the woods. It was always a frosty Wisconsin morning, but somehow, I still managed to be out in a deer stand. My dad would have a nice heater and a big blanket for me, although I still managed to freeze. There was just something about being out in the woods and listening to the wilderness. It was pure solitude. This intrigued me to want to go somewhere other than just my deer stand. When my dad asked me in the fall of 2018 if I wanted to go to Alaska to hunt a grizzly bear, I could not say no. I cannot say how thankful I am for this experience. It taught me about the finer things in life and who I really want to be. I got to share unforgettable memories doing something I love to do with the most important man in my life, my dad.

Our 14-day Alaska trip started on July 25, 2019. We flew into Fairbanks, Alaska and met our outfitter and guide, Aaron Bloomquist, and his wife, Angie. They took us to a Super 8 to stay two nights so we could get our licenses and some last-minute gear.

Finally, the day came where we were being “dropped,” as I liked to call it. Angie picked us up since she was also going on this adventure. We met our other guide, Dan Whitmus. Right off the bat, I could tell this would be an experience I would never forget with some pretty unforgettable people.

We flew in our “slow” plane for about three hours until we landed at a high pass. We set up camp, and I tried to figure out how to set up my tent that just fit me and my pack. We decided to go to bed and get ready for our first day of hunting, which I was so excited for!

The next morning, we ate a cup of oatmeal and gulped our coffee or hot chocolate down. Then we headed for our long hike around a mountain to find that grizzly. Unfortunately, we didn’t see any grizzlies, but the view was gorgeous. When we got to camp, I threw off my boots and took a nice seat, hoping tomorrow I’d see a bear.
As I woke up the next morning, I could just feel it was going to be a long day. Today, Dad and I decided to split up and go separate ways. Dad went with Dan, while I went with Aaron. He and I sat on a little knob for a while, and then he spotted a white speck across the river. It was a bear! We watched it for a while as it trudged across the river into our camp. We wanted to get closer, so Aaron and I were off. As we walked down, I saw Dad and Dan walking in the same direction. I told myself, “That’s my bear!” We got to the river, and the hunt was on. We kept stalking the bear until we finally got across the river and up on a little knob. Dad and Dan were across the river watching me take on this grizzly. Aaron got me down on his pack and helped me get positioned to get a decent shot. The bear stood up on its hind legs and looked at me. It fell back to the ground, and I pulled the trigger of my Remington 7 mm. After a couple shots, I saw my grizzly fall to the ground. We walked up to “Blondie” and took some trophy pictures. He was gorgeous. Only three days in and I had my bear!

When I got back to camp, Dad was so excited! I gave him a big hug and was so thrilled to have killed a beauty. However, we were not done. Dad still had to get his, so Aaron and Dan went to work skinning and salting the hide while we cleaned up camp. It was time to start our 40-mile journey down the river.

We floated 15 miles that afternoon after shooting my bear. Aaron steered one raft with Angie and me, while Dan rowed another raft with Dad in it. We kept our eyes out looking for a bear for Dad, but we didn’t see one. Once Aaron decided where we were going to camp for a night or two, we set up our tents, got a meal in us, and went to bed.

The next day, we went up to a knob above camp and sat there for a couple hours. I felt so lucky to be up on a mountain in Alaska looking for a grizzly with my dad. Unfortunately, we did not see a bear, so we decided to head back.

Later that night, Dan, Dad, and I went back out to the same knob. It was drizzling and a bit breezy, which made it chilly up on the ridge. We didn’t see a bear, but we did see a muskox. It was a very curious animal that kept us entertained for a while. Eventually, it headed down the mountain and so did we.

The next morning, we packed up camp and went 15-20 miles down the river. It was a full day of floating. Eventually, we found a sandy spot to camp and decided to just call it a day. We listened to all of Aaron and Dan’s stories, which were very interesting. The experiences they shared were funny, educating, and so unique.
Unfortunately, rain hit us the next day and we stayed in our tents until the evening when the weather let up. However, we didn’t see anything, so we got in our rafts and headed a little further down the river. Once we got settled at our next camp, we headed up the mountain to look for Dad’s bear. I could see dad getting anxious as we only had two days left. I prayed every night to see a bear.

Finally, after sitting through an Arctic thunderstorm on top of a mountain with 60 mph winds, I spotted a bear! It was far off in the valley, so we decided to make a move. It was extremely windy, and it was starting to rain again. The wind was blowing towards the bear, which we were walking towards. I could see its nose go up, take a sniff, and there it went. Seeing the discouragement on my dad’s face was disheartening, but we had one day left.
The next morning, we sat around for a while, had a good breakfast, and debated what we were going to do. Later in the day, Dan, Dad, and I went out. I slipped on my waders and trudged up the mountain. We sat and glassed on a couple of nobs and kept getting further and further from camp. It was getting extremely foggy and starting to mist, but we decided to head over to one final mountain and Dad spotted a bear walking across the next mountain.

I stayed behind while Dad and Dan went after the bear. As more fog was setting in, I could not see them or the bear anymore. I sat tight with my rifle and waited for a gunshot. About 45 minutes later, I heard three shots. I knew it was Dad. I took out my binoculars to see if I could spot them. After the fog passed a little, I could make out two small figures walking across the valley. Immediately, I was up and walking. As I got closer, I heard hollering. Dad was standing by his dandy! The bear wasn’t a pretty blonde like mine, but it was bigger and much older. The teeth were a bit rotted, and the head was huge. The joy across Dad’s face was unforgettable.

We took a ton of trophy pictures and got the grizzly skinned. Then we started our long trek back with our packs filled. It was such a good feeling! We just beat our deadline, and Dad and I were going home as successful hunters. Coming back to camp and showing Angie and Aaron our successful last hunt made our last night in the great Alaska wilderness something I will never forget.

The following day, we flew out. I thought about how lucky I was to go on a grizzly bear hunt with my dad in Alaska. Seeing his love for the sport is something I wish every hunter could experience. I learned a lot about myself and was able to spend quality time with my dad before I headed off to college. I want to thank Aaron, Angie, and Dan for an adventure I will never forget. This experience was once-in-a-lifetime, and I am so thankful to have the opportunity to get a beautiful grizzly and be with my dad doing something he loves.