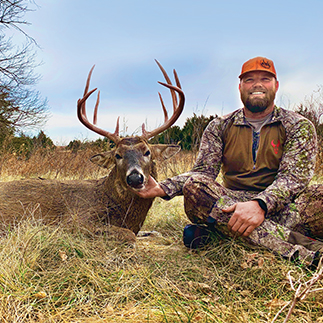 This story actually started back in 2016 in Idaho when my first ever whitetail deer hunt took place. That hunt went “OK,” and even some success was had! I couldn’t get over enough how cool these deer are and how fun they are to hunt. After several years of not being able to hunt whitetails, my brother got accepted into Creighton University in Omaha, Nebraska. That’s when the work started for my brother, Aaron. Not only did he study dentistry, but he also found us a spot to hunt some whitetail deer.

In the summer, we decided we would buy deer licenses and see what would happen with no expectations. We decided that with my minimal whitetail experience and Aaron’s limited knowledge of the land, we wouldn’t be extremely picky with the deer we decided to harvest. Aaron and I grew up in Utah hunting high country mulie bucks and bulls, so whitetail was a whole new ball game as I had learned from my first ever whitetail hunt.

After months of planning, looking at onXmaps, and talking on the phone, I was in Nebraska with Aaron and Kanyon (our cousin). Opening morning was less than 12 hours away, and we were all pretty excited. After a restless night and a short drive, we arrived where we would hike in to hunt for the day. Aaron was the first one to get a buck down on opening morning shortly after first light. We decided he and I would get his buck broken down and back to the truck, grab the lunch stuff, and head on back to our glassing knob. We made it back with lunch for us all and started making sandwiches, not paying a lot of attention to what was going on around us, like many of us tend to do while eating lunch and talking about prior hunts and experiences. That’s when things got really exciting for me really quick. I caught a buck moving our direction all rutted up and moving in and out of the trees. I practically threw my freshly-made ham and cheese sandwich into the dirt, but I gathered my emotions, set my sandwich down, and grabbed my gun and shooting sticks. The buck had moved into a small group of trees, so we waited. After a few minutes, Aaron grabbed his grunt tube and gave out a little grunt. Being mule deer hunters from Utah who have hunted in Wyoming, Idaho, Colorado, and Utah, I honestly wasn’t too sure about calling these bucks in. I just hoped the big buck wouldn’t turn and run off with his tail in the air. To my surprise, my buck stepped out of the trees almost instantly. I had previously ranged how far the deer would be, so I settled in right behind his shoulder and squeezed the trigger on my .300 Win Mag. Boom! The rifle went off, and the bullet found its mark. To my surprise, my buck took off. After finding him again, I placed one more good shot in him and he was down for good. I cannot believe how tough whitetails are.

After some high fives, I asked, “Does anyone know how big he is?” All Kanyon and Aaron could say was, “Big!” I made my way down to the buck, and to my surprise, he was way more than I ever could have imagined for a hunt with no expectations.

A big shoutout to my brother, Aaron, for all his hard work to make this hunt happen. That’s mainly what this hunt was about was spending time with my brother and family.