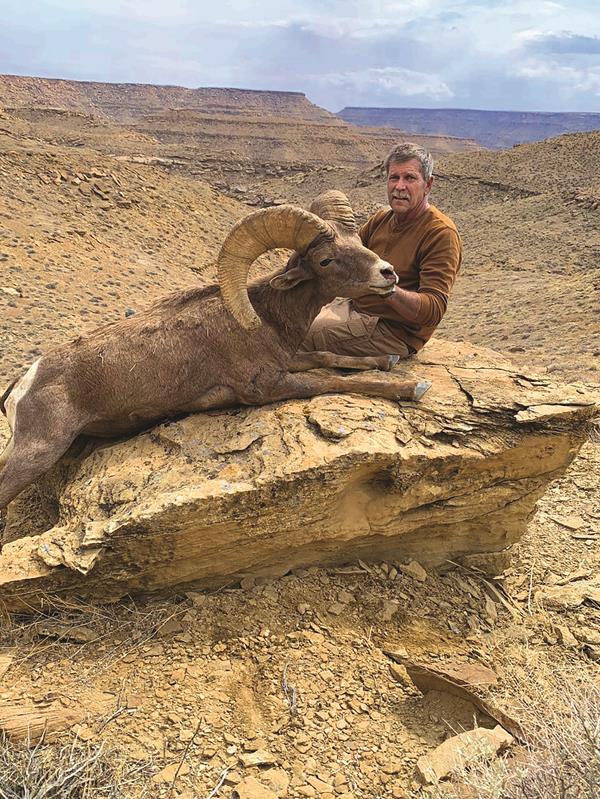 While scouting for Desert bighorn sheep in the barren rock lands of Escalante Staircase National Monument in Southwest Utah, my wife and I spotted some smoke that seemed to come out of the ground. We investigated and discovered large holes in the ground that lead to veins of coal that apparently had been burning for over 2,000 years from a lightning strike. I started glassing again and saw more smoke. Thinking it was another burning coal cave, we went to that spot only to discover an actual tree on fire from a recent lightning strike. We found both the smoking gates to Purgatory and the proverbial burning bush. I knew then that this was going to be an exciting and crazy bighorn sheep hunt.

I drew the tag as a non-resident. The odds were astronomical, and I was just lucky. I started what I called “cyber” and “phone” scouting soon after getting the notification from the Utah Division of Wildlife. The previous hunter list from Huntin’ Fool allowed me to contact prior hunters and map out where they had seen sheep. Also, the information on the Utah Division of Wildlife website allowed me to map all the areas of previous successful hunters. Since this was a once-in-a-lifetime permit, they were happy to share their information. I now knew where the highest concentrations of sheep had been. I was ready to start my in-the- field scouting. I found access to high glassing spots, saw a lot of sheep sign, and found sheep while glassing. I knew where I wanted to start.

My buddy, Frank, came along to help me glass and hopefully pack out. On the second day of the hunt, I glassed a large group of sheep near where I had seen the smoke holes. There was six ewes and three rams in the herd, with one large ram. I called Frank over to watch the sheep. While we were glassing, the sheep started moving closer to us and six more ewes joined them. I knew this was a good ram for the unit, but it was only the second day of my hunt. The sheep kept getting closer, eventually coming right below us, and they stopped at about 300 yards almost straight down off the rimrock cliff that was our vantage point. I decided this ram was definitely worth shooting even on the second day of the hunt. He bedded down on an outcropping of rock where he could watch over his harem of ewes. Using my rangefinding binoculars, I knew the exact distance. I took the shot, and it hit perfectly. The ram stood up, and I shot him again and then he was down.

Frank and I were not able the find a way off the rimrock down to the ram. Using my onX mapping app, I charted a route to the ram from the valley below. We drove the truck around to the bottom of the canyon, which took about 45 minutes. We hiked the two miles up the canyon to the ram and then took pictures, processed the ram, and hiked out. It took us about six hours round-trip.

The ram was fantastic with large, flared horns and a lot of mass. The wildlife biologist scored it at 165". It was a great hunt in the beautiful, vast, barren, remote canyons of the Escalante Staircase where there is not only bighorn sheep, but also dinosaur bones, petrified trees, and mountains that smoke!

There are people to thank. Thanks to my wife, Lisa, who helped me scout and supports my hunting addiction, and of course, thanks to Frank who is eager to come along on hunts and will do whatever it takes to make a hunt successful.