Memories I Will Never Forget 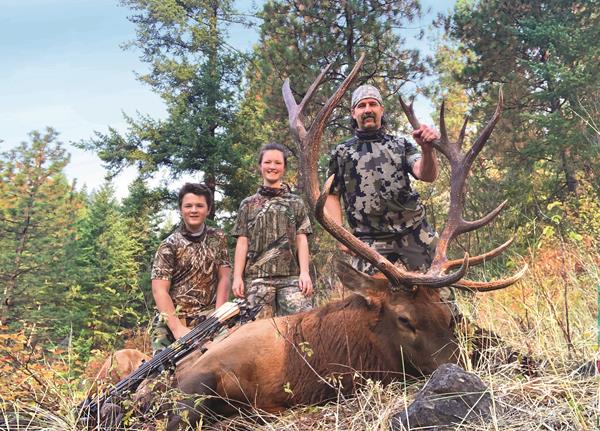 The fires were bad this year. We weren’t sure we would get the opportunity to even use the Blue Mountains tag I had drawn with only 8 points. For the past three years, my dad had taken my brother and me out for the first week of hunting season, but we had been unsuccessful in filling the tags. After eight years, my dad finally drew a Washington tag. With this being such a tough draw, he wasn’t sure he should take us along. Needless to say, my brother and I were persistent in convincing him we needed to go. However, a once-in-a-lifetime dream hunt was turned into a constant checking of emails to make sure they didn’t close the unit. It wasn’t my hunt, but I still felt the same nerve-racking disappointment my dad did. It was about a week before the archery elk season would open when we found out they had opened the unit. We were going on this dream hunt after all!

We were seeing it all – deer, coyote, bear, and elk. We would go out in the early mornings and come back in the afternoons to eat and sleep. There were only four access points to hike out to hunt. Our plan was to be at one of the gates an hour before the sun rose so we could beat the other hunters out there. The first two days were long – wake up at 3:30 a.m., make coffee, and drive to the second gate. We were hooked on the second gate after we got into a herd of 25 elk at the top of the trail with a huge 7x7 bull and a satellite bull bugling back and forth. The second day, we did the same thing. Ultimately, we had to go out a little further to find elk.

On the third day, we went out in the morning from the same spot. We didn’t see much, so we went back to camp a little early. We went out later that evening after an early supper and took a trail off the original. I was feeling a little disappointed because of the morning we had, but that all went away when we heard a bugle. We continued to walk down the trail, our footsteps quieter but not our excitement. The light was slowly fading, and we knew if we didn’t hurry it would be too dark to shoot. An owl perched on a tree branch slowly spun its head all the way around to see us. It was stalking us with those wide yellow eyes, only its head moving, following our every step. However, the light was still dimming and the elk were still bugling. We continued to hurry and crawled up a grassy hill to sit behind a tree overlooking a huge yellow meadow. My eyes widened when I saw them, the tan bodies of elk grazing in the field. We sat and watched these magnificent creatures, looking for the big one, the trophy bull. I tried not to move, so I didn’t see, but my brother did. When he said, “Dad, don’t turn and look, but there is a huge bull coming up right behind you,” I slowly turned to look. The bull started to move. The arrow nocked with a click on the string, and my dad slipped a call in his mouth, slowly drawing his bow back. Then I heard a mew call followed by a “Sssshhh” as the arrow cut through the air and then “Thwack!” It was the distinctive sound of the arrow smacking the elk. An acknowledgment that every archery hunter recognizes, you have undoubtedly hit your target. The bull started to jog out from behind a bush in front of our tree. My dad whispered urgently as he wrestled with nocking a second arrow, “Call, Anya! Call!” I found myself searching for the small wooden call deep in my pocket. I pulled it out and called. It was not the best call I had done, but it did the trick. The elk stopped! I was staring into its eyes. Waiting patiently for the second shot, my dad quietly exclaimed, “I don’t have a shot!”

I couldn’t look away. I saw the orange luminous nock dangling. The arrow was hanging out of the wound and then it fell out. The elk was still staring into my eyes. I wiggled my toes, trying to dispel the tingling of pins and needles in my foot. I couldn’t move, though. If I did, it ran, so I waited. The elk finally looked away and started to walk up a small hill away from us. We crawled out from behind the pine tree and headed toward the second meadow to see the other bulls. We watched as another huge bull ran through his harem, bugling, with multiple satellite bulls answering his call. It was a majestic moment none of us will ever forget. We watched until it was too dark to see through the binoculars.

We got our headlamps out and walked back to get the arrow. There was blood, some drips and then a puddle. The blood was foamy like soap, which meant Dad had hit a lung. This was it. We were going to get our bull! My legs were tired and all I wanted to do was lay down in that field and sleep, but the excitement kept me going. It was about 9:00 at night. The shot had been well over an hour earlier, and we started to blood trail. We blood trailed up and down hills for hours, but it never seemed to end. It was now midnight, and the trail was still going. The blood was fresher with every step. Then came the disappointment of bumping the elk out of its bed. We marked the last spot of blood and started back to the trail. Our legs felt like jello, and our eyes were barely open. We were ready for sleep. I started seeing little drops on the dirt road. Water maybe? No. Blood! The elk had walked all this way to end up just down the road from our car. We followed it down the road a way and then marked the spot where it had gone into the trees.

We came back the next morning, went up the trail to our mark, and started to blood trail again for about 40 yards. I looked up and saw what I thought was an interesting looking branch. However, it was not a branch, it was an antler! There it was, our bull. He was at the top of a hill. We had to be fast now. The sun would start to get hotter, and our meat would start to rot. We took our pictures and got to skinning. It was a super long and difficult process, but I loved every minute of it. After we got all the meat, we cut the head off and started to pack out. My brother and I didn’t have pack frames, so we had to stuff the backstraps into our backpacks. Five trips and then we drove back to camp. When we got back, we immediately started putting the meat into the ice chests. We realized we were running out of room and ice and were starting to panic. Luckily, we got to borrow some ice chests and saved our meat. With a freezer full of meat and a 7x8 bull on day three, it was the best hunting trip I had ever been on. It was a hunting trip full of memories with my dad and brother that I will never forget.