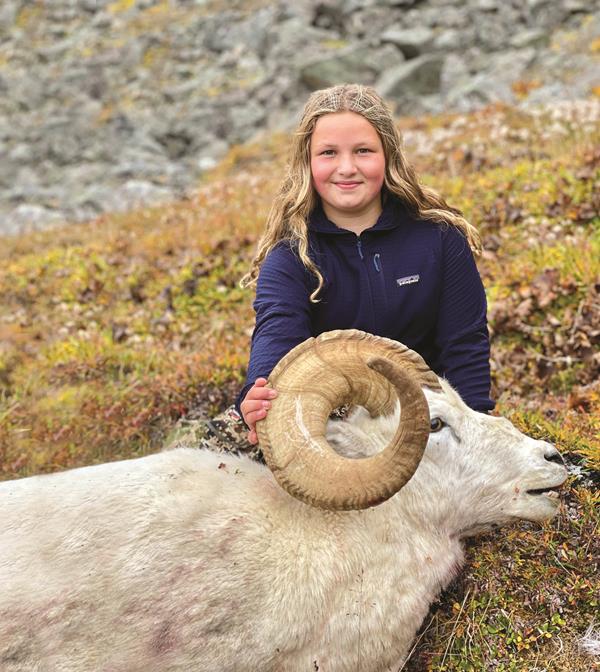 Dream season! This was the first year my 10-year-old daughter, Harper, was eligible for the draws in Alaska as well as our youth season. I had agreed with her last year that if she didn’t draw a tag, we’d do the youth season with her and she would punch either my tag or her grandad’s if he went. She proved as lucky as her mother who always seems to draw crazy low odd tags. Her mom drew Tok three times, and in 2020, she drew Tok sheep and Delta bison. I put most of Harper’s choices for sheep on the late season Delta controlled use area, but I put her final two choices on her namesake, Mt. Harper. Sure enough, her first year and Harper drew Mt. Harper. It would be a busy season as I had also drawn my first sheep tag in the Chugach.

After a brief solo hunt on my permit in the super soggy rain of the early season, I harvested a pretty ram, knowing there were bigger in the unit, but I was proud as it was my first solo ram and the first for that range. Most importantly, this allowed me to exit with a few days of recovery before turning my focus to helping Harper fulfill her dream of taking her first ram. It would not prove an easy task as the area is known for its low population density and big, rugged, open country, but if we found rams, the area had good genetics for heavy horned twisters with beautiful flare. Whether she harvested a sheep or not, I wanted her to have fun and enjoy the wilderness and time with family and our friend, Chuck Orsborn, who graciously came along to help pack. I wanted her to hunt hard so that if she got one, she earned it.

Harper did her part preparing, going to the range and practicing with her suppressed 6.5 Creed Tikka with a shortened youth stock. She hiked with me often during the summer, climbing the steep trails close to our home. I knew she had what it would take physically, but sheep hunting, like any longer multiday backpack hunt, is every bit as much mental as physical, and for kids, keeping them in a good headspace and entertained is at times the greatest challenge. Harper held up to her typical warrior persona and smiled, laughed, and simply had an amazing time even in the hardest of challenges when the first two opportunities proved defeats.

We were fortunate and hiked into the right general area and found sheep from day one. Her first stalk was on day two, but somehow the two rams disappeared. Day three had us glassing a legal ram early in the morning and several miles away. He looked good, so we went for him. After closing 3.8 miles as a crow flies to 190 yards, Harper succumbed to overwhelming curiosity and just had to look. The ram busted her within a split second. The almost three hours of hiking up and down and around back to camp, she remained optimistic and promised she had learned just how amazing their eyesight really is.

The next day was plagued with poor weather, but as the evening rolled in, the ceiling lifted and storms rolled out. I found specks of sheep on a high distant slope over five miles away on a straight line, but with the spotter, I could not only tell they were rams, but one was heavy, well out past his jaw. Maps were reviewed, and plans were made. We were going to go check him out. Now the complication remained that we couldn’t come close to going straight toward them. They were three drainages away with two with cliffs we couldn’t climb or descend. We were going to have to take the scenic route and move camp over several miles closer.

It took a couple days to move camp and climb into the drainage where we last caught a glimpse of the rams. As they were high on the slope above when we lost light and sight of them, we weren’t sure if they had fed over into the next drainage. We held out hope we were in the right spot. As we peered over, luck found us again. There they were, feeding in the bowl below, tucked up right into the head of the valley. Moreover, the ram who had looked heavy from miles away was immediately obvious and clearly worth the move. They were roughly 1,700 yards away. Thinking they may bed soon, we formed a plan to sidehill around in the never-ending boulders, using them for cover. We descended to a prominence just above where the sheep were last seen feeding. As we slid in behind one large boulder on the exact spot we had planned, I peeked over just a little more and was so happy to see all six rams bedded. Good fortune continued, and not long after getting Harper all set up and positioned, her rifle in her tripod and calmed, the big ram rose along with another legal but lesser ram. They started to spar and butt heads, giving us a nice show.

After several minutes of head butting and pushing each other about, the rams split. With the others still bedded, the big gent finally turned broadside, giving Harper a good downward shot. She hit him hard, a little low if anything, and he stumbled right as the other rams went about 15-20 yards before stopping to watch their monarch. In her excitement and as Chuck advised her to hit him again, she missed on her second shot. The ram was mortally wounded, bleeding well, but he was moving further away. When he turned to walk, Harper shot, hitting him perfectly and putting him down for good. Her shot startled me as I wasn’t expecting it, but at the impact with the ram just abruptly dropping, I think all three of us yelled out in unison. Harper had done it! She had hunted hard. We had hiked her dawn to dark more than once that week, and she had never complained. Not only had Harper taken her first Dall sheep, but she had done it in the Mt. Harper boulder fields and had taken an absolute dandy ram at that. She wasn’t finished yet, though. We would take photos, dress him, and pack him out of the valley to the next drainage while planning our exit to a closer strip. We wouldn’t roll back into camp until well after midnight in dense fog.

The next two days were double digit mileage of shuttling meat and camp up and down steep boulder fields to a strip opposite the direction of where we had come from but somewhat easier to reach. Despite Chuck and me feeling pretty beat down, Harper never complained. By the time we reached the strip with the last load, Chuck and I joked from here forward our hope and goal would be to hunt like a 10-year-old girl. Even before she harvested that beautiful ram, I couldn’t have been prouder of her. I’m so happy Harper got her ram. It was such a wonderful gift to top off the trip. However, all the hard days leading up to it, that’s what I enjoyed with her the most.