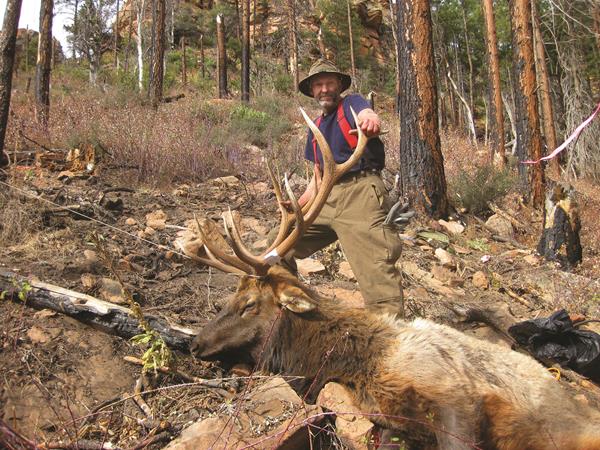 Our third trip to Arizona elk hunting was certainly a charm. Not because we got the biggest or the most elk, although that can certainly be a good bonus, rather, it was because of the camaraderie. It was different country than our native Oregon, and we just plain like hunting together. In reality, every time was a charm. We made three trips to one of Arizona’s poorer hunting units in 2009, 2015, and 2021.

Our Arizona hunting adventures started in the early 2000s. We chose our unit because it had a season that fit into our schedule. It didn’t interfere with Thanksgiving or my November 29th wedding anniversary. As we built points, I spent time scouting the unit. Luckily, my father-in-law lived in the Phoenix area, so when we would visit him, I was able to drive up to the area and do some scouting.

By the time we drew our tags, we had figured out where we wanted to concentrate our hunting efforts and where we wanted to make camp. We decided that we would primarily hunt under the Mogollon Rim. It is an area that is very difficult to access, provides plenty of feed during the winter, has a lot of water, and is a south-facing slope. The ruggedness of the country was never a deterrent. Being loggers in Oregon, we were used to climbing up and down steep hills. Although we had never considered ourselves “trophy hunters,” we decided that since it was a 1,400-mile drive from Oregon to our Arizona unit, we would limit ourselves to a good 5-point or better. We figured that we could always shoot spikes and raghorns back home.

When we started our 2009 hunt, I wasn’t sure if we would be successful. We set up camp and did our final scouting. As opening morning approached, we each climbed up towards “The Rim” in preparation for glassing at first light. This is a ritual that we would later refer to as our “forced march.” On the second day, we struck gold. Barry spotted a nice bull and worked his way close enough to make a good shot. It turned out to be a nice 7-point. He got in touch with Greg and me, and we grabbed pack boards and started the arduous process of packing an elk off of The Rim. We would repeat this process two more times that year.

The weather was good to us that first year. It started out cold and dry, and then it later turned to snow. The snowy weather made the elk hunting better and drove out most of the other hunters. By the time the season ended, we pretty much had the place to ourselves. That was not the case for our 2015 hunt. Although it would get down to about 15 degrees at night, it got up into the low 60s during the day. We were also surprised at how many more people were heading up toward The Rim to hunt. Although, none of the other hunters were willing to go as far up as we did, they did have at least some impact on the elk. As we made our forced marches in the dark, we would usually get to our glassing points at least half an hour before daylight. That was usually about the time the four-wheelers started showing up. Although I could see the four-wheelers’ headlights, I was generally far enough away that I couldn’t hear them. That was good for my hunting prospects. However, Greg and Barry’s early morning glassing points were mostly within earshot of the four-wheelers. It didn’t take long to realize that as soon as the elk could hear the distinctive sound of the four-wheelers, they started moving out.

The morning I bagged my 2015 bull, I started my forced march at about 5,600 feet above sea level. By daylight, I was glassing at 6,740 feet. Overlooking the place where I had taken my 2009 bull, dubbed “Elk Flats,” and not seeing anything, I continued up the hill. I crested at just over 7,000 feet and started down a steep finger ridge. I couldn’t believe my eyes when I saw a nice 6-point standing on a narrow rock ledge. There happened to be a nice rock to set up on. I put my bipods out and set up for a good shot. I squeezed the trigger and sent one right through his heart. I could only look on in shock as he tried to climb a sheer rock wall! I can still remember watching him flip straight over backwards out of sight.

I started making my way through the rock cliffs to my bull. When I found him, I realized he had bounced off of two rock bluffs and landed on a third. One of his antlers was completely broken off, and I couldn’t find it anywhere. Luckily, I was able to get in touch with Greg and Barry and we put a plan together to get him packed out. I didn’t think we would ever find the broken antler. However, when Greg and Barry got there, Barry looked up and said, “There it is hanging on that bush.” What a relief! There were also numerous tips that were broken. However, considering how far he fell and how many rock bluffs he bounced off of, I felt lucky that it wasn’t much worse.

Although no other hunters were willing to hike up onto The Rim as far as we did, we later realized that we also had competition from above. The locals unfavorably referred to them as “rim shooters.” We would later call them the “meat wasters.” My first experience with them came in 2015. As I was working my way up toward The Rim where I thought a bull might likely bed down, I realized that someone was shooting off the top. Although I could tell that the shots were coming my direction, I didn’t feel terribly threatened. They shot a total of 14 times. I don’t know if they were successful or not. A little bit disgusted, I simply went to another area.

We had two more encounters with “rim shooters” in 2021. My brother, Greg, encountered a hunter who said he had shot an elk at over 1,000 yards and was trying to find it. It turned out that he had shot it off the top two days earlier and was only then able to make his way up from the bottom to retrieve it. My cousin, Barry, later saw this same guy as he was making his way down with the antlers. He told Barry that the meat had spoiled.

That same day that Greg and Barry had encountered a meat waster, I heard seven shots that sounded like they originated from the top of The Rim. They were one ridge over from where I was and sounded like a large round. Two days later when I finally made my way back over to that area, I found something that disgusted me to the core. They had caught a nice bull out in Elk Flats. They took the antlers, caped him out, and boned out the hind legs. The rest of the elk, however, was simply left to rot. This went completely contrary to everything we had ever learned about hunting. Of all the animals we had taken over the years, we had never left any meat to spoil and the antlers were always the last part of the animal to come out.

Our 2021 hunt definitely had its challenges. With low temperatures of only 30 degrees and highs into the mid-70s, it was far too hot and dry. This combined with the meat wasters above and a greatly increased number of four-wheel “noise makers” below, we weren’t having much success on The Rim. However, we decided to not let it ruin our hunt. We looked to some other areas in the unit that we had seen elk in before. There was one place in particular where we had jumped a nice bull in 2015. We put a plan together for a morning hunt. I would make my way through an area where we suspected a bull could be bedded down. Barry and Greg would be waiting in locations that we thought a bull might use for an escape route. Usually when we put a plan like this together, the elk wind up outsmarting us. However, this time, we lucked out. I kicked up a bull. As he ran down the hill, Barry couldn’t quite get a shot off at him. Fortunately, Greg was in the perfect spot and bagged a nice 6-point. After several hours of pulling him down the hill with a capstan winch, we were able to take this bull back to camp whole!

Three years of hunting, 8,400 miles of driving, and six bulls. Not too bad for three average guys willing to work just a little bit harder than most other hunters.