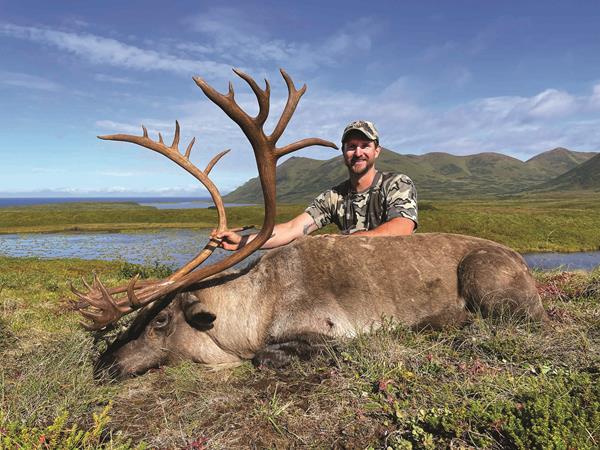 Alaska. Hunting the Last Frontier is something I had always dreamed of. The planning and logistics involved in making this happen can seem as large as the rugged landscape this great state spans. For this reason, I had always just put it on the back burner and like many others said, “I’ll get there someday.” When my lifelong friend called me with a plan to hunt Kodiak, I knew the wait had to be over. It was time to make this happen.

Planning this hunt was different than all the hunts I’ve put together in the past decade. It seemed as though half the adventure of hunting Alaska was just getting there and back. Joe and I both realized early on it needed to be attacked in small steps, rather than big picture to avoid becoming overwhelmed. Thankfully, we worked together in making a plan, and before we knew it, we were on a plane heading for Kodiak.

Upon landing in Kodiak, we were met with fog, and a lot of it. Our Beaver flight was delayed by about two days. We had prepared ourselves for this and tried to keep the anxiety at bay, which was no easy task. Finally, we received the call from our pilot and were off. The views from the floatplane were almost indescribable. I could tell we were in for the hunt-of-our-lifetime.

We awoke the first morning of our hunt to good weather and knew we needed to make the most of it. We each had a caribou tag and two deer tags in our pockets, so we didn’t want to let time slip away. Having located a good herd of caribou the evening prior, we took off at daylight to put ourselves in a position to make a move. Luckily for us, a lone bull was hanging a mile from the pack, so we decided to take off after him. We quickly learned we had underestimated the difficulty of the terrain on Kodiak. There is no such thing as flat, and the brush seems to push you back with every step. About an hour later, we found ourselves lying prone 50 yards from the bedded bull. Joe slipped around to a better vantage, and with the crack of his rifle, we had just filled our first Alaskan tag.

After his bull was butchered, we quickly made the loop to get on the big herd. Using the terrain to stay hidden, it didn’t take us long to be back in a good position. There was one bull that stood out from the herd, and I made the decision that my tag was for him. We patiently waited in close proximity as he chased other bulls around until he finally gave me a shot. When I hit him, he continued to chase the herd around until he separated once again, allowing me to seal the deal. Having never hunted caribou before, walking up on two great bulls on the first morning was incredible. It was an amazing day that I will never forget, and neither will my legs or back!

Day two brought blue bird skies and found us busting through the brush once again, making our way to the alpine where we glassed a couple of good bucks. We made the decision to carry our bows and see if our stalking ability was up to snuff. After I had one failed stalk due to swirling winds, we quickly found another buck in a great spot. Within minutes, Joe was in position of the bedded buck and I was able to watch him place a perfect arrow. We were on cloud nine. After taking a few extra minutes to soak in what had just happened and the beautiful scenery around us, it was time to get to work and give our already sore legs another workout. That night, we enjoyed tenderloin on the fire in celebration of another amazing day.

The following morning once again greeted us with good weather. With a storm on its way in the near future, we knew we had to keep working hard to make the most of this blessing. The bucks turned out to be more wary than expected, and we messed up on a couple great bucks that morning, once again due to swirling winds. We knew we just had to keep hiking and hunting smart and something would go our way.

At around 5 p.m., we crossed into a big saddle and spotted a buck in his bed at about the same time he spotted us. Being pinned down in the open and out of range, we decided to slowly walk back where we came from hoping he would think we were leaving. Once out of sight, I dropped down and made my way to a knob that would put me in range of the buck. I couldn’t believe he was still there when I crawled over the top. Minutes after the shot, we were walking up on our second blacktail.

Darkness was setting in as we arrived back at camp, and although we wanted to celebrate with a fire, our bodies made the decision for us to crawl in our sleeping bags. Having put on more than 10 miles and the third consecutive day of hauling meat, we knew rest was needed if we wanted to finish this hunt out strong.

Fast forward two days now to the last day of our hunt. The weather system was rapidly changing, and the wind was picking up. After finding a buck the day before that seemed to have nine lives (a story for another day), we felt happy with the results of our hunt and started to batten down the hatches. I couldn’t help myself but to set the spotter up and take a look around. I quickly found a group of three bucks down low only 500 yards from camp. Joe didn’t need any persuasion from me, and we were off as quick as could be. With the bucks now up slightly higher than us, we had to be very careful with our movements and used the wet, brushy creek bottoms to slip into 300 yards. After crawling through an alder patch to conceal our final approach, we lay side by side and took aim. I told Joe to shoot first, and I quickly made my shot after. A last day double! After a hug and high five, we quickly boned out the bucks and made it back to camp just as the weather system set in.

The following 24 hours, the wind and rain were relentless. In communication with our pilot, we were finally able to be picked up a day later than expected. That didn’t bother us, though, as we were in Alaska. We embraced every moment, knowing eventually we’d have to leave this amazing place.

Looking back on this hunt, I can’t help but feel slightly emotional. I was blown away at the beauty and untamed nature of Kodiak. It is truly a special place. This hunt was unusual as we never experienced those lows that most hunts bring at times, and I will treasure the memories it gave us forever. Upon returning home, I made a vow to myself that I will get back to Alaska every chance I get. The adventure it offers is unparalleled. If Alaska is on your radar, but the logistics seem overwhelming, trust me, you can do it. Break it down into one small goal at a time, and your dreams will come to fruition.