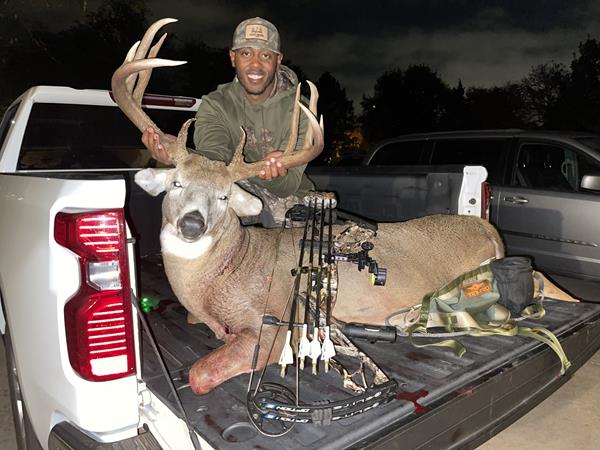 It all started during the 2020 deer season, which was my first year hunting Kansas. I was fortunate enough to get stationed at Fort Riley as my first duty station, which for an avid outdoorsman like me, is a dream come true. I expected nothing short of having the opportunity to harvest a world-class whitetail. As the season started, I began running trail cams and had a few decent deer on camera, but nothing too extraordinary, that is until October 31st when I got the first picture of a nice 8-point with a huge body and great mass. From that day on, my sights were set on that deer. Knowing that this was public land and the rut was coming up, I was hoping he would slip up and that I was the only hunter that knew of this deer. Unfortunately, that was not the case.

On the evening of November 7th as I went out for the evening hunt, there was another truck parked where I had normally parked. My heart sank, and I just knew this hunter was surely going to get him. I drove around to the backside of the same patch of woods and walked in about 100 yards and set up in hopes the other hunter would push this deer back towards me. Sadly, nothing happened.

The next morning, I went out to the same spot, and right at first light, I had a 130" class 8-point on the wood line checking for does. I grunted at him, and he came in on a string, presenting me with a 30-yard broadside shot. The anxiousness took over, and I could not pass up that shot. This harvest was my biggest buck to date. Although I was excited about accomplishing a new personal best, I knew I had a lot of homework to do in the offseason chasing the “stud” I had on camera.

As the 2020 season came to a close, I prayed that he had made it through the season. I ran cameras all summer, hoping to get a picture of the deer I called “The Big 8,” which turned out to be a bust. Going into the 2021 season, I was discouraged about not getting any pictures of him all summer, but I still had hope. I hunted hard with no luck. On the 21st of October, my family took a weekend trip to visit some family down in Louisiana. On October 25th, we returned to Fort Riley. Knowing a cold front had pushed through, I told my wife I was going to run and check the cameras to see how the movement was over the weekend. Little did I know I would return to the greatest surprise on my trail cam.

Finally, on October 21st, almost a year later, I got another picture of “The Big 8,” who was now “The Big 10.” The picture was a few days prior, but I just knew I had to be in the stand. I walked back to the truck, put on my Tethrd Mantis Tree Saddle, grabbed my bow and my climbing sticks, and headed back into the woods. I could tell the direction he was coming from based off the pictures and decided to work my way up the draw towards that direction. I found a tree, climbed it, and got set up. The wind was right if he did the same thing he did a few days prior.

Hours passed, and I began to lose hope. With 30 minutes left of shooting light, I heard something enter the wood line from the bordering CRP field that I believed he was bedding in. I pulled my binoculars, and it was him, The Big 10! He stood there for what felt like an eternity, but it was only a minute or two, checking the wind and making sure it was safe to make his way down the draw. Instead of coming down into the draw, he made a slight right turn and worked his way up the side of a hill but still working towards me. I knew if I let him get too much closer we would be eye level with each other, being that the tree that I had climbed was in the bottom of the draw and he was on the hillside. I made my mind up. The rst shot opportunity I had I was going to it. I had already ranged different trees in the area, just in case something like this were to happen. He finally stopped at a tree I had previously ranged at 57 yards, quartering to me. I knew it was now or never. I drew back, settled the pin, and released. I watched the lighted nock zip through the air, hitting its mark. As soon as he turned to run off, I watched the arrow fall out, which is not something a bowhunter ever wants to see. My heart dropped. I immediately climbed down, walked to the truck, and called my wife to tell her I had just shot the biggest deer of my life, but I wasn’t confident it was a good shot. I asked for her advice, and she said, “Come home and give him some time.”

I went home, and we talked it over, debating on getting a dog to track it and how much time we should give him. We decided to head back out to check the arrow before calling a dog in. We loaded up, my wife, Krista, my daughter, Sadie, and me, and we headed back to the patch of woods I was hunting. With my daughter being young and it being extremely cold, she and my wife waited in the truck. I walked back to the tree, and as soon as I got in, I could see my lighted nock glowing on the ground. I walked up to it and picked up the arrow, only to find what appeared to be about four to five inches of penetration and not a lot of blood. I knew which direction he ran after the shot, so I decided to walk and see if the blood trail got any better. I tracked about 30 yards until I hit the edge of the CRP field where the blood got really scarce. I immediately called my wife and told her what I had found, and she thought it would be best to get a dog.

I turned to walk back towards the truck, and only about 10 steps in that direction, there he was. I couldn’t believe it! Finally, I got to put my hands on The Big 10. All the hard work hadn’t paid off just yet as I still had to get this monster in the truck. With it being the last day of a four-day weekend and about 10:00 at night, I knew there weren’t many people to call, and my wife had to stay in the truck with our daughter. My work had been cut out for me. I attempted to call one of my buddies to help, but sadly, no answer. I decided it was time to put my new deer cart to work. I walked back to the truck and came back with the cart. However, I found it almost impossible to get him on there by myself. I didn’t give up, and eventually, I made it happen. I wheeled him across the CRP field to the back of the truck where my wife helped me load him into the bed. At that moment, the celebration began! I knew he was big, my biggest by far, but had to put a tape on him to figure out how big he truly was. After scoring him the next morning with the help of a couple buddies, we got a green score of 169". As of October 25, 2021, I was officially tagged out with truly the buck- of-a-lifetime!