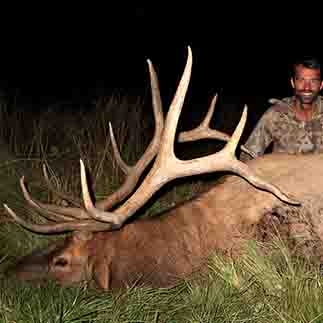 “Feels like I’ve been through a master class!” Jesse grinned. Master class? “I’d say a trial by fire at best,” I replied. Two perspectives, both of us looking back at a week of bowhunting elk in the famed Valle Vidal of Northern New Mexico on a high-pressure, once-in-a-lifetime tag. I’ve been bowhunting elk since my early teens, introduced to it by my dad and now with two and a half decades of experience behind me, but Jesse is a new recruit to the ranks of hunters. Inspired by the experiences of friends and family and a love of wildlife and the challenges of the outdoors, he’s moving against the grain of the urban, west coast culture he was raised in. Unlike many of us who have been hunting since youth and often represent another rung in a family legacy, Jesse is coming into hunting as an adult and without the benefit of a hunting culture to guide him. And he’s not alone. The wild changes we’ve seen recently, a combination of market shifts and availability, restrictions on typical recreation opportunities due to Covid, and unrest in big urban areas has created an exodus of Americans moving out of the cities and into the country. Many of them are looking for a simpler, slower, more natural way of life. For some, the idea of hunting for subsistence and recreation has growing appeal, and I’ve personally been asked for guidance by almost a dozen budding hunters in the last year alone. Sporting goods stores are bustling, hunter education class numbers are up, and it falls to those of us with experience to either jump into the mix as mentors or let newcomers make their way on enthusiasm and YouTube videos alone.

When I learned I’d unexpectedly drawn the Valle Vidal archery elk tag, it didn’t take Jesse long to volunteer to join me come September. I knew how physically and mentally taxing a self-guided mountain elk hunt at 10,000 feet could be, and I warned Jesse about the level of intensity I was preparing for, but he seemed undaunted. I’d hunted deer with him once already and guided him on his first successful big game harvest, a huge chocolate P&Y black bear earlier this spring in Idaho, so when my warnings about the challenges of bowhunting elk didn’t faze him, I decided the help and company would be worthwhile. We started planning and training.

As they do, the months leading up to the hunt went by swiftly. The many miles between Northern Idaho and New Mexico didn’t go swiftly, but we finally found ourselves driving the last stretch out of the scrub prairie and up into the huge aspen meadows of the Ville. Road access is very limited, so we spent the first few pre-season days hiking 10-20 miles per day, scouting and checking water sources. The hills and meadows were teaming with bovine. We quickly realized the elk were higher up and further back, away from the beef, and that a spike camp would be a good idea. Not far from where we set up spike camp, bulls were starting to talk, although a lot of lone, older bulls were still solo, which gave us hope for some calling opportunities. I’ve learned to limit my calling when hunting pressured elk, and my initial focus was going to be on sitting one of the many wallows we found in the high meadows. However, on opening day, getting skunked sitting over a massive wallow and then getting soaked to my underwear by one of the almost daily monsoon cloudbursts convinced me our best strategy might be calling.

Over the next five days, we hiked around 130 miles, if GPS is to be trusted. We were locating elk, calling, sometimes getting responses, other times getting ignored. I passed on several small bulls that Jesse brought in with pleading cow calls. No good opportunities on bigger bulls, but we would see glimpses of them here and there, and we were experiencing everything amazing and frustrating that mountain elk hunting offers. We were soaking it in, and Jesse’s curiosity and willingness never dwindled. There were a lot of topics to cover, and he picked it all up quickly. We found a good groove in no time, sneaking into the wind on bugling bulls, getting as close as possible before letting off some titillating cow squeals, hoping for a curious customer.

It was hard hunting morning and evening, and I didn’t go easy on myself or Jesse. His enthusiasm never let up, even when we reached that stage of the hunt when things started to feel a little desperate and the fatigue of hiking more than a dozen miles each day was weighing on us. We decided to pack out to the truck to resupply, caught a much-needed bath in the river, and shared some fried potatoes with the school bus driving hippie who had taken up residence next to our truck in the pullout. Feeling clean and refreshed, we scrambled the five miles back up into bachelor bull valley.

It was a calm, clear evening, and the winds were finally predictable. We both felt that tickle of excitement as bulls started making their music in the timber above us. We counted a half dozen or more, some of them with bugles and personalities we’d already become familiar with. We caught glimpses of a few raghorns moving just inside the tree line, and we ran like devils for a string of thick timber on the edge of a wide, wet meadow below the descending herd. One close bugle was full, long, and familiar. A very solid 6-point we’d seen while scouting. We set up on the edge of the meadow, and Jesse eased into the dark trees behind us, juicing up his cow call. For the next half hour, we engaged in a heated debate with the big bull about who should come to whom. He insisted we come up to him, and the frustration and impatience in his bugles were obvious. We were positioned well along the tree line and couldn’t risk moving toward him. Stalemate. The conversation began to dwindle, and I thought the play had run its course. Jesse moved closer, and we decided to make the bull think one of the raghorns had moved in with these sexy cows and was having a heyday. We squealed, chuckled, glugged, and mewed. The bull bought it, and he was pissed. Crashing through deadfall and screaming, he broke the timber 40 yards from me, coming dead on and moving fast. I knew my best option was to draw, then wait until he passed me broadside. At only 6 yards, he took the arrow just behind the shoulder and ran another 30 yards out into the wet meadow. Unaware of what had just happened, he stopped and stared into the trees where Jesse was still cow calling, and then he tottered and fell. Ecstasy.

We finally left the wet meadow just before 2:00 a.m. the following morning, meat deboned and cooling on lattice we’d made from skinned poles. Sleep that night in the cramped tent was sweet. The next day was real work and many miles. By evening, we were loading up the last of our gear, nursing our wrecked feet, and repaying the potato-cooking bus hippie with some fresh elk loin.

Looking back, I’m not sure I would have harvested an elk if Jesse hadn’t been along. We worked hard for it. He called in multiple bulls for me, and he packed half my elk out of the backcountry. All I did in return was answer his hunting questions and adamantly discourage him from sampling the local species of mushrooms. I’ll hunt with him again.

In the future, I’ll likely meet other aspiring hunters, and when I do, I’ll be faced with the internal conflict we all are – do I keep my knowledge to myself in hopes of higher personal success, less crowded hunting spots, and fewer opportunities lost to the mistakes of another’s inexperience? Or do I engage, share the values, respect, ethics, and appreciation that were given to me, and maybe gain a long-term friend and hunting partner in the process? If we want to share the fields and woods with good hunters, I think our best opportunity is to teach new hunters to be good hunters. Right now in the rural U.S., opportunity is knocking.

On the drive back to Idaho, I asked Jesse what he thought of his first elk hunt. He said he expected it to be one of the hardest things he’d ever done, and that it was harder than he expected. He’s planning on applying for the tag next year.