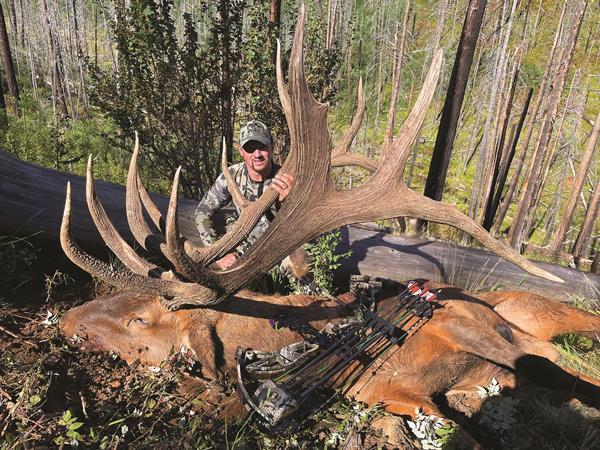 I work with our family business at New Mexico Professional Big Game Hunting, Inc., and last year, I had the pleasure of guiding Mahlon Barkman and his friends on a mountain lion hunt. After a successful hunt, they mentioned that they wanted to apply for archery elk in the Gila. When the draw results came out in April, I called Mahlon and told him the great news and that it was time to start practicing and getting in shape for a rough country New Mexico elk hunt.

Mahlon arrived at our lodge on August 30th, and we drove a long two hours down to our base camp where I had horses and everything we would possibly need for this hunt. After getting settled in, we talked about the close encounters we had on some very nice bulls the previous year. I was excited and couldn’t wait to see what those bulls had turned into this season.

On September 1st, we pulled up to the end of a dirt road in the bottom of a canyon. We had a one-hour hike in the dark straight uphill to get to the top by daylight. Knowing there were going to be some bugling bulls on top, we hiked up as fast as we could. Reaching the top, we took a little break to listen. After hearing the first bugle, two other bulls bugled south of us. We followed the ridgeline toward the closest bull. After climbing over a bunch of downed timber and working our way through and around a bunch of thorn bushes, we made it to within 300 yards of the bull. Since it was early September, we decided to give him a cow elk call and see what happened. After two calls, the bull screamed and we knew he was a player right away. We moved in to 150 yards and got set up.

I blew the cow call about once every minute, and the bull answered every time. He came walking through the timber, headed right at us, and at about 35 yards, he stopped, facing directly towards us. I could tell he was a really nice 6x6 with one of his brows turning down over his face. Getting as close as he wanted without seeing a cow, he turned around and disappeared back into the thorn and aspen thicket. We decided to head up the ridge to a little wallow bulls use regularly and spend the remainder of the day there. Three cows came by us but no sign of a bull, so we made our way back down the ridge and back to camp.

The next morning, we headed right back to the top where we had seen the bull the day before. The bulls weren’t quite as talkative, so we began to glass the big ridge to the east. Shortly after panning across, I could see a good bull and got my spotting scope set up on him. He was a big 7x7 with kickers off both of his fourth points. We made our way across the canyon as fast as we could. We stalked in to where he was, and I could see his rack sticking up about 120 yards away. We snuck along the edge of the thorns and got to about 80 yards. It was loud and crunchy in the downfall. Taking one more step, I looked up and he was looking our direction. The big bull went crashing down the ridge, and the gig was up. Time to look for another. We circled back around the head of the canyon, glassing and listening the rest of the day.

On day three, we went back into the same area, but instead of climbing that monster hill, we came up the bottom of the canyon from the north. Once we made it to the top, we moved into a big horseshoe-shaped valley. Immediately, I spotted the big 7x7 that we had seen the day before. We moved as fast as we could, but by the time we got there, he was too deep in the thicket to sneak up on him. We tried a couple cow calls, but he already had a herd of 20 cows close by.

The big bull was screaming at another bull on the opposite side of the thorns. We circled around to see if we could get on the other one. He was a super heavy 6x7 that had a nice-sized sticker in between his fourth and fifth points. We watched the heavy bull move in toward the 7x7 and they almost fought, but the 7x7 gave up and let the heavier bull have the cows.

The elk stayed in there all day, so we hunted our way back down the ridge to the east. Getting down closer to the truck, we heard a bugle in a patch of timber back to the west. We made our way over to the edge of the timber on the downward side and got close to where we thought the elk would come out. A 6x6 bull with 10 cows came out about 150 yards west of us. He was a decent bull but not nearly as big as the others we had seen. As daylight started to fade, we hiked back down to the truck and headed for camp.

On day four, I had a new plan to go a lot further to the west up on the bigger mountain. We drove to the same spot where we had parked on the first morning and hiked straight up the bottom of the canyon with the wind in our faces. It was super quiet that morning with no bugling or elk activity. As we walked, I would stop every so often and blow a few cow calls to see if we could get an answer. I knew we were in a good area, so we continued in the silence.

By the time we made it to the top, it was about 9 a.m. I knew the wind would soon switch and start going uphill, so it was perfect for us to start hunting down the other side in another big canyon to the west. From the top of the mountain, I called a few times, but we didn’t hear anything, so we dropped down a little draw following an elk trail through the thorns and aspens. Scanning around, I caught movement on my right side just over a little rise. I could see the tips of a nice elk rack heading straight toward us about 75 yards away. I looked back at Mahlon and told him, “Hurry and nock an arrow.” We were standing on the edge of the thicket by some downed trees as the bull kept walking toward us and a little to our right. We thought he was going to walk right by us at about 50 yards. Instead, he got even closer to 35 yards. As the bull’s head went behind a big pine tree, Mahlon was able to get to full draw as I whispered the yardage to him. I was expecting a shot at any second when Mahlon told me to stop the bull. I made a soft cow call, and the bull stopped and turned to look. Before he could get his head turned all the way to us, I heard the bow go off and saw the bull jump. Just as I saw where he was hit, the bull started trotting back down the hill and fell over right there in front of us! We were high fiving and getting another arrow nocked just in case the bull got back up. We slowly made our way over to where we could see him, and he had already passed.

When we got to the elk and started rolling his rack around, it dawned on both of us that we had killed a once-in-a-lifetime bull. Right away, I recognized the bull from the previous season. I had seen him in the same canyon fighting with another bull that we had killed that scored 393".

After taking a bunch of pictures, the real work began. We got our bull quartered up. I carried the rack, and Mahlon carried the cape and backstraps along with all our gear and his bow. We made it out back to the truck at around 3 p.m. as super happy hunters with a giant bull. Mahlon’s bull taped out at a gross score of 407 5/8" and a net score of 392 6/8".