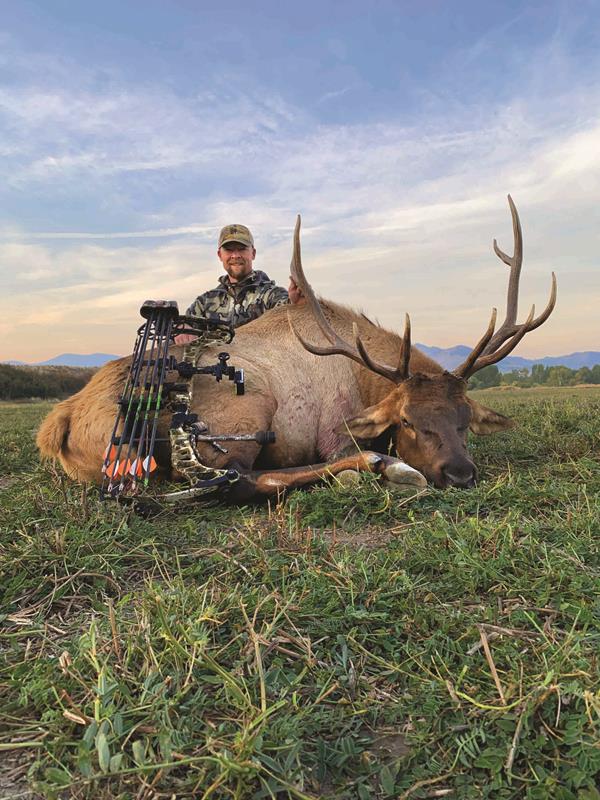 2021 was a transition year for me. Following 17 years of religiously bowhunting the same terrain in Southwest Montana, I was embarking on a new adventure in unfamiliar territory. The ranch had several miles of Missouri River shoreline, multiple hay fields, and incredible high elevation topography and cover. All the ingredients were in place, and I was optimistic heading into the archery season. However, the wildfires that ravaged the West throughout the summer months persisted into the fall and continued to fill the air with smoke that limited visibility, and a severe drought in our area led to extraordinarily dry conditions. The first few days in the field were quite slow, and I was surprised by the low elk numbers.

A couple weeks into the season, things started looking up. I put on several miles traversing the ridgetops and started picking up fresh sign. I was able to zero in on a north-facing slope that was annihilated by elk traffic and beds. The next morning, I hiked into the area at first light and was greeted with a series of bugles just below me. I closed the gap and had a cow pass by at 80 yards with a bull screaming just behind her. Moments later, he was broadside and I was at full draw, settling in for the shot. Unfortunately, my peep was twisted and I had no visibility through to my sight pins.

After he worked through my shooting lane, I let down and was able to sort through the issue with my peep and followed the bull into his bedding area. I sat on him all day, and we exchanged bugles that evening until the sun went down. However, another shot opportunity did not present itself.

A week later, my hunting partner and I located a great bull in the heart of the ranch. We made a run at him but were busted crossing an open hillside. We decided to stay back and let him settle down with his cows in their bedding area. Late that afternoon, he ripped a couple bugles and we circled around to get the wind right. We closed the gap while randomly bugling back and forth along the way. Unbeknownst to us, he had ditched his cows and was aggressively headed our way. The bull and I surprised each other at 32 yards, but I was unprepared with no arrow nocked and he blew out of the area. Elk hunting lesson 124,235 was officially in the books, and we were off to look for the next opportunity.

As the season progressed, the elk gathered in the hay meadows along the Missouri River each night and crossed the river at daybreak, venturing onto the neighboring property that we did not have access to hunt. There was no effective way to approach the elk by land with shifting winds, flat terrain, and no cover to conceal a stalk. After several days of the same pattern playing out, I decided to head into the field midday and determine where the elk were crossing the river and look hard at alternative methods to get into the zone. I marked the river crossing with a waypoint on my onX app and felt confident the elevation change from the water surface to the field was significant enough to hide my approach from the river via a kayak.

The following morning, I launched my kayak at 5:00 a.m. and floated down the river to the waypoint I had marked the day before. There was no moon and limited stars to light the night sky, so I relied on my headlamp to guide me. The float had me on full alert. Every time the light beam hit the water, a fish would porpoise and flash in front of me. A muskrat swam by within a couple feet of the kayak, and a beaver slapped the water several times directly in front of me.

As I approached the field, I could hear the bulls bugling, so I shut my headlamp off, relying exclusively on the light shed from my phone displaying the map and waypoints. My senses were completely overloaded, but I enjoyed every minute of the float. Paddling over to the shore, I carefully and quietly beached the kayak, unloaded my gear, and made my way towards the field. The wind was less than ideal, so I backtracked and circled around to the second point I had marked and waited patiently for first light. The next 45 minutes was an ensemble of cows mewing, bulls bugling, dirt flying, and antlers crashing together 15 to 100 yards in front of me. Nine minutes after legal shooting light, a bull wandered into my lane and stood broadside at 48 yards. I released the arrow and knew instantly the shot was lethal. Seconds later, the bull expired 75 yards from me. The balance of the herd gathered up and slowly wandered out of the field towards their bedding ground, unsure of what had transpired. I was on top of the world and completely taken back by the fact that my plan had unfolded exactly how I had envisioned. Unbelievable!

Prior to launching the kayak that morning, I made a deal with myself. I was going to take the first bull that presented a shot. As the elk were exiting the field following the release of my arrow, I counted 30 bulls in the herd with one absolute slammer that turned out was a mere 60 yards to my right. I never looked his way and ultimately stuck to my plan. I am so glad that I did not get sidetracked and focused on antlers. This hunt was 100% focused on the experience, and with the collection of eyes in front of me, getting greedy may have led to different results. Fortunately, I will be blessed with recalling fond memories of a unique and successful hunt and a year filled with quality elk steaks and burgers.