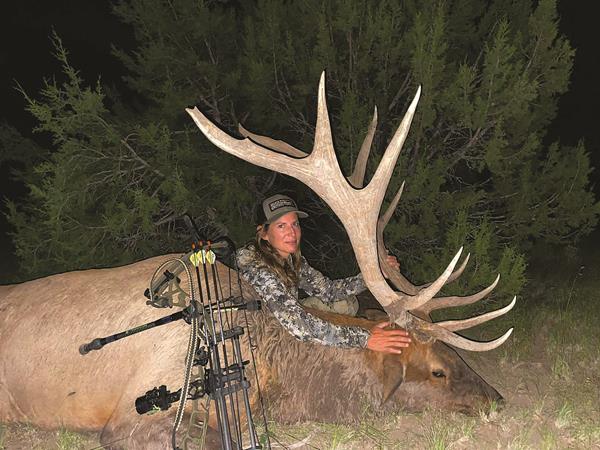 The first time I drew back a compound bow and felt the let-off, I was hooked. I fell in love with archery. Years of competitive pistol shooting was replaced by the new challenge. I had never been drawn to rifle hunting, but somehow with a bow, it felt right. I always had a feeling that I should experience hunting, killing, and eating an animal. My daily modern life felt removed from the natural world. I was yearning to get back to my connection to nature. After a year of archery, including a Total Archery Challenge in San Antonio and Park City, I reached out to a hunting guide friend who offered the possibility of tagging along on one of his hunts. After talking to the outfitters, I decided to jump in and book an archery elk hunt in New Mexico. It was a private landowner tag during opening week.

I was there for the experience and the hunt. My happiness was based on the process of the hunt, not just the harvest. I didn’t heed the warnings that it would be “very quiet” with no rut activity and waiting in blinds at water sources every evening. I could not be talked out of it.

Every morning started in darkness. My guide, Hadley, was a former bronco-riding cowboy who had been hunting the area for years. We’d hike to the top of a ridge to glass, and the starry sky was replaced with a golden hue. The fresh air smelled of cedar and sage. I tucked my hood behind my ears to hear better. I followed my guide, noticing the details in his pack and his gear and how he read the wind, pointed out tracks, and moved through the brush.

Slowly, my hearing improved. I heard birds, insects, and the magical sound of elk calling. I paid attention to the wind on my skin, the clouds, and the moon. We spent every morning spot and stalking. Every time I had an arrow nocked, my mouth went as dry as the terrain. I held still surrounded by cows on multiple occasions. I could see the dew drops on a cow’s nose as I gazed at the ground in front of her, never directly at her. I was proud of myself for staying so still and quiet. Hours of holding difficult poses in power yoga classes had paid off. We saw a few small bulls but never had a shot opportunity.

I spent every afternoon in a blind at a water source, patiently waiting. I was never bored. I was happy to be alone in nature. All week, other hunters were passing up on what I thought were perfectly shootable big bull elk. I had not wrapped my head around the concept of trophy hunting because the whole experience was so powerful for me. I was motivated to hunt for meat and for the experience, not the size of the bull’s antlers.

Finally, on day five of seven, I had my chance. A magnificent bull strode toward my hide made of cedar branches 30 yards from a water tank. He paused, staring directly at me. Time froze. I haphazardly drew back my bow and sent an arrow. I didn’t pause to consider waiting until he walked towards the water and that my single pin was dialed to 30 yards. He must have been at least 50-60 yards away. No thought about my bow hand’s grip, my anchor, follow through. My peep and front sight looked strange in the fading light. I had to close my non-dominant eye. I never do that!

I missed. A complete miss. My arrow landed in the grass between his legs. He jolted slightly and trotted away, looking back over his shoulder at me like I was a small child, no threat. He was regal, head high, standing in my memory in the dim setting sunlight. I ranged him at 85 yards as he casually walked away towards his harem. Out of range, there was no second chance. I was devastated with no one to blame but myself. I sat alone with my failure. The disappointment seeped into my soul. When my guide radioed to check in, my voice cracked, “I missed.” I couldn’t mask my emotions, and there was no point either. After seven full days together, he knew me too well. “Are you sure you didn’t hit him?” At least I had something to be thankful for. I wasn’t even close. A non-lethal shot would probably result in me never hunting again.

On the last afternoon, my friend gave me an arrowhead he had found for luck. I thought about the ancestors of this land. How they lived and what the elk meant to them and their survival. I thought about what this hunt meant to me as I made sense of life and death and my place and purpose on this planet. I carried this First Nation arrowhead in my chest pocket over my heart. I felt connected to the land and ancestors with my single powerful focus of hunting a bull elk. Sunset was fast approaching. I was at the same watering source with no bulls nearby except a couple calling out in the distance.

My guide, Hadley, radioed to me to get ready to move. He didn’t have to tell me twice. We moved fast and silent against the wind in the direction of the bugling bull and his herd. Finally, we could see him behind cedar trees. I was focused, calm, and ready with every cell of my body. I ranged a clearing in the cedar trees where we hoped he would walk out. At 60 yards, I took a knee. My guide above me had his rangefinder on the bull. Cotton mouth. When the bull stepped into sight, he whispered the magic words, confirming 60 yards. I took a double inhale and carefully drew back into my anchor. Aim small, miss small. My tension release sent the 100 grain muzzy fixed-blade broadhead straight to him. It felt right.

In one long exhale, Hadley whispered, “You got him, double lung shot.” He knew. We paused. A handful of cow elk darted around us. My heart was pounding. I didn’t celebrate. I registered Hadley’s excitement, but I didn’t believe it. I was in the moment, fully present, drinking in faded sunlight and sounds as we waited before walking towards the clearing. I found my arrow a few feet away, shaft broken and fletching bloody. I held it in my hand. This was real. As the night sky chased the last hue of the sunset to the west, we followed the blood trail like detectives looking for clues. Little red flowers and the darkness required my full attention.

Following the blood trail was an emotional roller coaster. What if we didn’t find him? What if he was injured and died slowly? What if... Hadley stopped and turned to me, “Melissa.” My heart sank as I feared bad news. A glimmer sparked in his eye as he said, “There’s your bull.” I followed his gaze to see the bull tucked under a tree. Now the tears were flowing. I was breathing, but my bull was not. We cautiously went closer and pushed him with a stick. Hadley was certain he was the same bull I had missed two days earlier. He had been caught on multiple trail cams, and the guides had their eyes on him. I laid my hands on him, sitting with my bull, taking in the severity of life and death. The life force that had left his body, the powerful reality that death is the only certainty in this complicated life. We will all expire. I took his life to nourish mine. I thanked God for his life, the precious life-sustaining meat, and the opportunity. We gutted the bull in the field. I took a bite out of his giant warm heart and marked my face with his blood. Fortunately, I tagged out in an area accessible by truck. The pack out was easy.

This bow hunt was the most powerful, life-changing experience of my life. To meet this bull again after my epic failure was a triumph over myself, my nerves, and my ability to stay calm and focused. I was the only female hunter that week, on my first hunt of any kind, and I harvested the biggest bull of the week.

I have so much respect for my guide, Hadley Miller, and the team of guides at Black Mountain Outfitters with their decades of experience hunting combined with unbelievable work ethic, drive, and intuitive people skills. All I want to do is bow hunt.