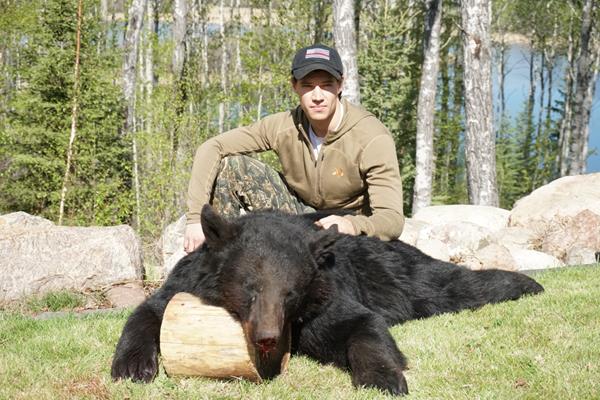 My son, Danny, and I discussed our mutual interest in making a bear hunt happen in the near future. A quick call to Huntin’ Fool’s Isaiah Joner yielded a few well-respected outfitters in the western provinces of Canada. We decided on Wheat King Adventures in Saskatchewan following a few conversations with outfitter Anthony Springer.
As we pulled up to our camp, my jaw just about dropped. When not on stand, we would be staying in one of the most beautiful log homes I have ever seen. Danny and I were sitting in our respective stands by 3:30 p.m. As the sun began to dip in the western sky, Danny’s first bear suddenly appeared at the bait. Being the first bear and first night of the hunt, he elected to pass. Not much later, a substantially larger bear made his appearance. The decision to take this bear became very clear. Danny shouldered his rifle and squeezed off a perfect shot. The bear bolted in his direction and fell not 15 yards from his stand.
On day two, Danny and I were sitting in a double-seated ladder stand overlooking a bait that had been frequented by a large color phase boar. Partially obscured by the forest undergrowth, we glimpsed the outline of what looked to be a large bear. In anticipation of his arrival, I stood and removed the bow from its hook. He closed the distance to 30 yards. I pulled back my bow, and at 15 yards, he came into clear view but moving right to left. As he hesitated, I placed the pin behind his front shoulder. My index finger touching the trigger and beginning to apply pressure, he suddenly began to move again, straight away from us. At 25 yards, he made a sharp left, allowing me an opportunity. The enormity of the bear was only overshadowed by having my son at my side.