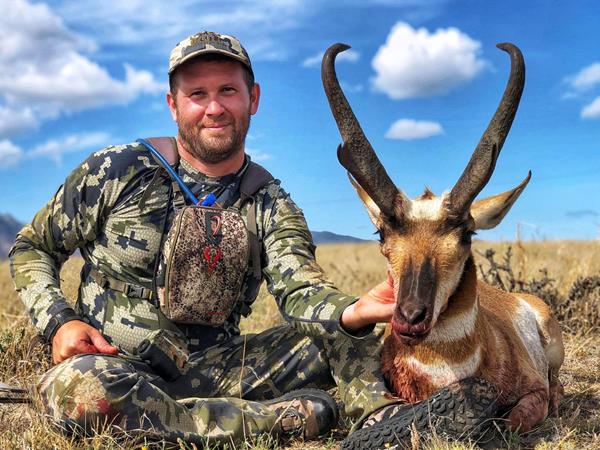 This hunt started when I learned I drew the tag. I called my Facebook friend, Eli at Pronghorn Guide Service, and lined up the first week of the archery season. Since I was 12, I had archery hunted antelope in South Dakota and learned that hunting antelope with a bow is not an easy endeavor. In fact, it is a very humbling experience. When Eli told me I would only need a couple days, I told him that my son and I would like a whole week, and he agreed to the time.

My son, Payton, has been on archery hunting trips with me since he was 4 and is able to break down the score of the antelope through the Swarovskis in a matter of moments. When he learned of the tag I drew, he would not let me go on this hunt without him.

Mid-July, I started getting pictures of antelope in unit 5A. Eli introduced me to his friend and guide, Bobby. As I was talking to Bobby, I learned that he had a plan for finding big antelope and was very excited to take Payton and me on this adventure. He told me his number one buck for this unit would be “Blade.”

Finally, it was August 8th. The truck was packed and the bow was ready as Payton and I headed off to the airport. After multiple delays and cancelled flights, we ended up driving to Denver, getting there the same day as the opener of the antelope hunt. During the drive, I was able to talk to a United employee who switched our flight from Denver to Phoenix. Finally, we got on the plane at 7 a.m. Bobby texted me that he had been on Blade since sunrise, keeping an eye on him. After our flight got in, we drove an hour and a half and we were finally there.
Finally, I got to shake Bobby’s hand and meet the group of spotters who were here to see the hunt. Blade was bedded in the open where approaching him was nearly impossible. I had to get my Swarovskis on him. He was a stud. Bobby lined up some horses because of where he was bedded. The wind was blowing 15-25 mph, and along with the lack of sleep, any shot over 50 yards would not be good. With some maneuvering and patience, we got to 62 yards. Not feeling good about the distance and wind, we waited and let Blade walk away, thinking we could come back around on him. Blade decided to leave and was gone.

For the last three hours of light, Bobby, Payton, a group of random spotters, and I glassed in hopes of seeing Blade before the sun was gone. Now that darkness had set in and Blade had not been seen, a lot of things were going through my mind, like why did I not take that shot? That was probably my only chance. It’s funny how your kids know you and can sense your stresses. Payton said, “Hey, Dad, don’t worry. At least you didn’t wound him. We will find him.” Those were pretty awesome words from a 12-year-old. That night, we stayed at Bobby’s cabin. He fed us steak and potatoes, and it could not have been any better. With some well-needed rest, we were ready for day two.

Up early, we went to the last spot where we saw Blade. We got to the high spot, but no Blade. An hour into glassing, there he was under one little fold about 200 yards from where he was in the open yesterday. Today, the wind was not blowing and the horses were ready. It was three hours after sunup and we were working. Bobby and Payton were watching through the spotting scopes. At 210 yards, Blade bedded in the open, looking to the horses. Across the draw, a group of does picked up our profile and we got their attention. A smaller buck started pushing that group of does around, and Blade decided he wanted to see these girls for himself. He got up and walked across to the does. The other buck moved away as Blade moved in. The does really didn’t like Blade, and they jumped around and scattered. They stopped, and we got to 71 yards. Sitting on my knees, I nocked an arrow, checked the peep, and watched Blade take three steps. He was now at 76 yards, so I drew and released. Whack! There was a cloud of dust and a spinning speed goat. He was done.

Walking up on him, I could see Payton half a mile on the other side running through the desert, excited to touch an Arizona antelope’s horns and see him up close. What a stud with awesome mass, great cutters, and a heck of a curl. I cannot thank Pronghorn Guide Service or Bobby Priest enough. These guys put in the time and know their stuff. I was finally able to find a crazy group of passionate antelope hunters like my family.