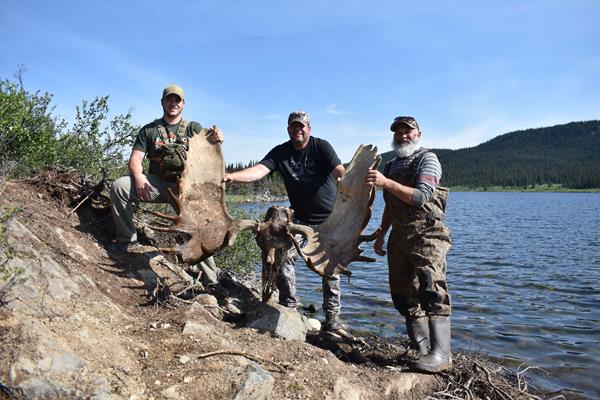 I remember picking up the phone and my dad saying, “I think I am going on an archery moose hunt in British Columbia in two years!”

A couple months went by and his once-in-a-lifetime trip was booked. I had to find a way to go, and not long after, my spot was booked as a non-hunter in camp. It would be the very first time either of us would be that far north, on a float plane, or hunting moose.

A 32-hour drive through the most beautiful country we had ever seen later, we stood on a dock waiting for the float plane to be fueled up. The sound of the Beaver’s roaring motor intensified as we took off. We had about an hour until landing on an unofficially named lake in the middle of nowhere close to the Alaskan and Yukon border. Our pilot announced our arrival and tipped the plane, giving us a good view. We circled the lake before interrupting the glassy water with the plane’s floats.

After introductions to our guides, Pete, Karl, and Pete’s significant other, Kelly, we transferred our gear to the two small plywood cabins built by Pete and Karl many years prior. We couldn’t hunt that day since we flew in, so we spent the next several hours organizing gear and glassing the lake’s edges from camp while my dad and Lee shot their bows. None of us got much sleep that night as anticipation was high.

The next five days played out with no moose sightings. We covered a lot of country, sitting and calling for hours at a time while glassing. We learned a lot and felt that if we were patient things had to pick up.

We didn’t have our first real encounter until day six when we spotted a bull across the lake from us. The bull walked right into the only shooting lane we had a mere 15 yards away. He stopped broadside, but no arrow was released. My dad let his bow down and looked back at me with a big smile. He said he was alright going home empty-handed after experiencing that and he was going to continue to hold out for a more mature bull.

On day eight, we woke up to an inch of snow covering the ground. Pete used the small boat to drop my dad, Karl, and me at the end of the lake and then we hiked two miles to another lake. We arrived and started the routine we knew well by now. I was glassing and something caught my eye. I was looking at two big white objects. As they moved, I quickly realized it was a bull’s paddles that were full of snow. I called for my dad and Karl. The excitement in Karl’s voice confirmed what I had thought, we had found a giant. He was close to a mile away, moving left to right. We quickly made a plan and ran to cut him off. We made it about half a mile when we ran out of cover. There was a large opening littered with willows. I relocated the bull. He was headed dead away from us. Karl pushed us out in front and said he would stay in the trees and call as soon as we were set up.

We set up, my dad nocked an arrow, and Karl let out a cow call. The bull was headed our direction. He held up at the edge of the trees 180 yards from us. He finally started across the opening, coming on a string, grunting every step. He disappeared 80 yards out, headed between us and the lake. We realized we should be closer to the lake but couldn’t risk moving now. We could see the top of the bull’s paddles as he crossed us at 55 yards. He came up the trail and for the first time was completely exposed. Reading the yardages to my dad, I said, “54, 50, 47, draw.” 42 yards. The bull stopped but quartered toward us, not providing a shot. My dad was at full draw, but the bull knew something wasn’t right and wheeled around. I quickly grunted to try and stop him. He slowed for a second, and my dad released the arrow. We both saw his arrow hit him a little back. The bull ran about 20 yards and stopped. “How far?” I told my dad my guess, and he released another arrow. It disappeared over the willows and right into the bull. The bull took off but stumbled. He made it around the edge of the lake and disappeared over a rise. It all happened so quickly, and we were both unsure of the hits. We took a few minutes to take it in and collect ourselves before looking for his arrow and blood. Without success finding either, we marked the spot and headed back to the edge of the timber.

Karl was looking through his binoculars with a big smile on his face. He said the bull was bedded down not 30 yards from where we lost sight of him. Minutes later, we heard another bull grunting up the shore and glassed a small bull that seemed to be coming to our previous calls. As he approached, we could see my dad’s bull trying to get up. He stumbled to his feet and 40 more yards to the nearest timber. Watching the bull, we all agreed that it looked like a fatal hit, but it might take some time. We decided to back out for the night.

We began the hike back. Pete asked what had happened when he pulled the boat to shore. We told the story and that we were going to leave him until the morning. His head dropped. The pilot called and had to move the flight to the next morning due to a major storm coming in. After a quick discussion, we decided we had to go back and try to recover the bull before dark.

We got back to where we had shot from. It was dusk, and we had to hurry. We went to where the bull bedded and found a large pool of blood and a broken off arrow. Following the blood trail, we made our way to the edge of the timber. We lost blood and fanned out, looking for the next sign. I heard Karl whisper to my dad. We both quickly made it over to see the bull below. His head was down and at first looked expired, but then he sprang from his bed. He ran straight for the lake just 40 yards downhill. The bull made it out past where he could touch bottom. He was 30 yards into the water and expired seconds later. By this time, we had made it to the shore and watched helplessly as the bull disappeared below the water’s surface. Pete and Karl assured us that moose float, but for whatever reason, this time it sank and no one knew why. It’s impossible to describe the rush of emotions. It had been a long day, ranging from the highest of his to the very lowest of lows.

It quickly grew dark enough that everyone was digging for headlamps while my dad cut his tag. There was nothing we could do now but hike back and take the boat ride in the dark back to the cabins. We decided we were going to pack our gear that night and when the plane arrived in the morning, Pete and I would fly over to the lake the bull was in. He said that the moose should float overnight.

The next morning, Pete and I were over the lake the bull was in. Pete explained to the pilot where the moose was. We got as low as we could, and the pilot tipped the plane to better our view. With each second of not spotting the bull, my heart sank. Any optimism we had was stripped away as we made one more pass and the pilot said he was calling it.

Flying back was a horrible feeling, knowing my dad could see us and knew the outcome. As we landed and floated to the dock, I saw the same look as when we watched him sink. I stepped off the plane and hugged him before starting to load our gear for our trip home.

I went back to work at onXmaps, and not more than a week after arriving home, I got a call from my dad. He had excitement in his voice as he said he just got off the phone with Pete. They were scheming to fly back in the spring to try and recover the bull. Even if unsuccessful, we would know we did absolutely everything we could.
Nine months and many gear discussions later, my dad and I started the long drive. We made it to the small town we flew out of, and talking to locals, we discovered that word had gotten out and my dad’s bull was known by everyone as the “Scuba Moose.”

The next morning, we had been flying for about an hour when I saw the exact spot where we were standing when the bull walked by us. When we made it around the lake, the pilot banked the plane harder, giving us an even better view. Moments later, the pilot cranked the plane 180 degrees as he said, “I see the bull, he’s on the bank!”
We told my dad to lead the charge, and a few seconds later, we peaked over a rise and there he was in near perfect shape. He was every bit as big as we remembered. He officially scored 201 3/8". That night, we celebrated over a campfire. We couldn’t thank Pete, Karl, and Kelly enough for not giving up.

It was bittersweet, and we were both bothered by not being able to recover the moose right away as the meat and respect for the animals we hunt is important to us. My dad and I have shared many memorable hunts over the years, but most won’t hold a candle to our Northern BC moose adventure and the story of the “Scuba Moose.”