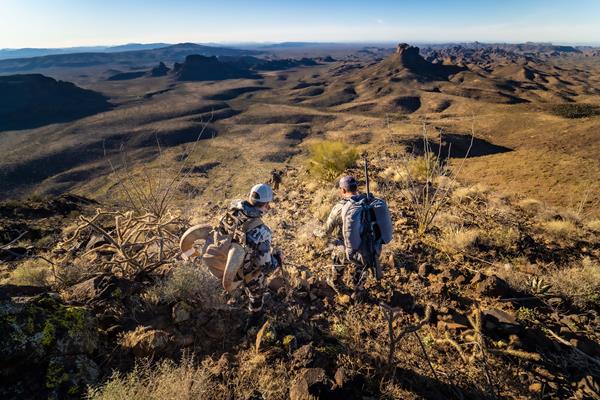 June 2020
Author: Robert Hanneman
Each of us is in a different stage of our hunting careers. I am in what I would call the "kids hunting" stage. Amy and I decided many years ago that once our three boys were at an age to hunt we would try our hardest to get them out hunting with their own tags as much as possible as long as they wanted to go. We are committed to taking them every chance we can as long as they are under our roof and even after they fly the coop. As long as they want their old man along for the adventure, I am game. Last year proved to be a challenging and incredible year since it was the first year all three boys were of hunting age. I spent the fall chasing those boys across five western states while they worked on filling 10 different big game tags.

Years ago when I started working for Huntin’ Fool, I took a phone call from Randy Ulmer. We got on the topic of taking your kids hunting, and he told me how he had been able to get his boys on a number of hunts in Arizona. He informed me about the transfer program where a parent or grandparent who drew a tag could transfer their tag to their child or grandchild. Never would I have guessed that just eight short years later his advice would give my oldest boy a great gift.

When my in-laws retired to Arizona and I told them about the transfer program to their grandkids, they were both excited about the opportunity be able to bless their grandkids with this gift. I ran the odds and figured that by the time the boys aged out of the program they should have at least drawn a couple deer and elk tags. Little did I know that the first tag Grandpa drew would be a Desert bighorn sheep tag. He very graciously transferred the tag to my oldest boy, Connor. The hunt was a special one with only Grandpa, Connor, Brady (the Huntin’ Fool cameraman), and me on the hunt. The hunt itself was amazing, and Brady was able to capture our memories on film. Connor’s Desert sheep hunt will be on Huntin’ Fool’s “The Advisors” series on YouTube. Connor will also be telling his own story of this incredible hunt later this year with an article in this magazine.

Connor was also able to harvest a great antelope in Montana which was followed by a good mule deer buck taken on a Colorado fourth season hunt. Not wanting to be outdone by their older brother, my other two boys both hunted really hard last fall. Colter, my 10-year-old, beat the odds and drew an Idaho bull tag. He finished out his first year of hunting with a 6-point bull from Idaho and a great Montana mule deer buck. Caleb, my 12-year-old, got lucky in Idaho and Montana and killed two 6-point bulls. He also took a nice antelope and a mule deer buck in Montana. His year was topped off by harvesting an oryx in New Mexico on his once-in-a lifetime tag.

At 40 years old, I have many hunting seasons behind me. I can honestly say that 2019 was a remarkable year for us, and my wish is that the rest of my time with my boys before they are grown will be just as enjoyable.