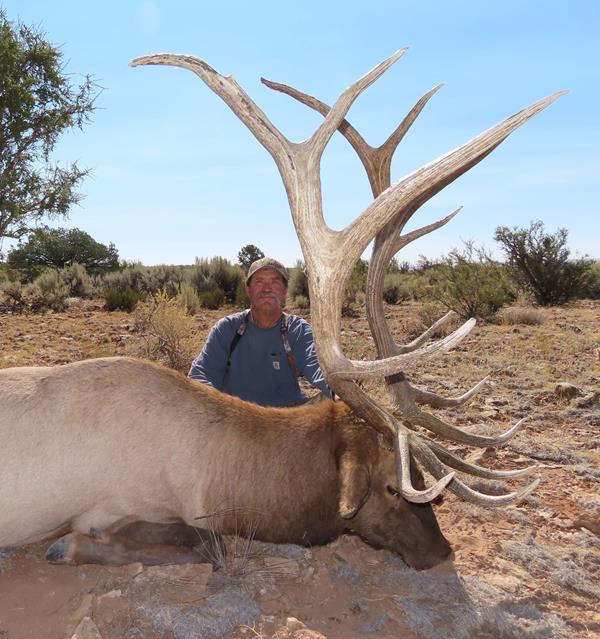 For 25 years, I had been applying for elk in Arizona as a resident. I know it seems ridiculous to keep after it after so many years of the draw result letdown, but I kept telling myself it would eventually be worth it. My lucky day came in 2020. I had finally drawn a unit 9 early rifle bull tag. Of course, I jumped on the phone and started spreading the good news to my family and friends. My good friend, Michael Goodwin, who is a guide for A3 Trophy Hunts, was probably just as excited that I drew! Michael was adamant that I give them a call to try and line out a hunt with the crew that runs unit 9 for them. After talking to them and some references, I made my decision to hunt with them for what felt like my once-in-a-lifetime tag.

The months seemed to crawl by as I waited for September to finally come. I truly had no idea what to expect from the hunt. My best bull was a 5-point, and I was sure we would do better, but we did not know much better he would end up being.

I had my gun dialed and everything ready to go months before, and the anticipation was eating me alive. I began talking to Hunter Weems with A3 about my expectations, such as trophy quality, shot distance, and other details pertaining to the hunt. My biggest concern was that I was able to enjoy my time with my family there as well, and Hunter assured me that the hunt would be focused on the experience and the bull would be the icing on the cake.
As summer came and went, the pictures started rolling in from the guides in unit 9 of unbelievable bulls. There were many over 400" and a handful of bulls that I would never pass in my wildest dreams. They explained that some bulls would travel onto the reservations, national park, and other units and may be unavailable to hunt, but they assured me there would be plenty of great bulls that I would be happy with.

Finally, September was upon us. My two sons, grandson, and I made our way north to unit 9 where we met the guides that would be hunting with us. Being that we were early, we spent a few days learning the country and looking over elk left and right while the archery hunt that was before mine came to an end. Hunter explained that Tyler Mott, another A3 guide, would be joining us as well for the seven-day hunt.

Opening morning, we traveled across the unit from camp to a glassing point where we would be kicking off the hunt. Tyler and Hunter explained the various bulls we would be looking for and the movement patterns of the elk in that area. If we saw a bull we wanted, we would have to cover some serious ground in order to get there in time for an opportunity.

We had not been glassing for 20 minutes when we heard Tyler say the words that every hunter wants to hear, “I’ve got elk!” After we put the spotting scopes on the herd, we realized there were at least two big framed bulls that we needed to take a closer look at. With Tyler and my family on the hill, we took off in the truck to get to an area where we would be in front of the herd and then we would head out on foot. We made it about 300 yards from the truck and started picking the bulls apart when Hunter took off running in the opposite direction back to the truck.

He told me that my son had glassed up another bull and Tyler confirmed that it was a bull they called “T3” because of his triple fronts on both sides. We made a mad dash. Clearly it was a bull that we needed to shoot based on the excitement my sons and Tyler were expressing to us. Again, we were out of the truck and on foot.
We needed to make it across 400 yards of flat open country before we would be able to intercept the bull as he was headed to bed. I followed as close as I could with Hunter saying, “Come on, Bob, just a little further!”
Once we topped the hill, the bull was 400 yards in the open. Hunter set the tripod up as a standing rest, and the first shot missed.

The bull ran up the hill and started posturing another bull. It was the perfect situation. At 470 yards, the second shot was true. The bull stood there with one in him, and I shot again. Another hit! I couldn’t believe the chaos that had just happened. It was almost like a dream that you only remember parts of. The eyes on the hill confirmed the bull was down, and we made our final approach to him.

Walking up on that bull was surreal. He had it all – mass, length, and extras. When I put my hands on him for the first time, I was obviously excited, but like I told Hunter, the most important part of the entire hunt was that I shared this with my family. My grandson watched as I fulfilled a lifelong dream. When the dust settled, it took me about three days to realize the magnitude of the bull. He green scored 414", which was something I never imagined holding, let alone putting on my wall. To answer the question, was 25 years of waiting worth it? Absolutely.