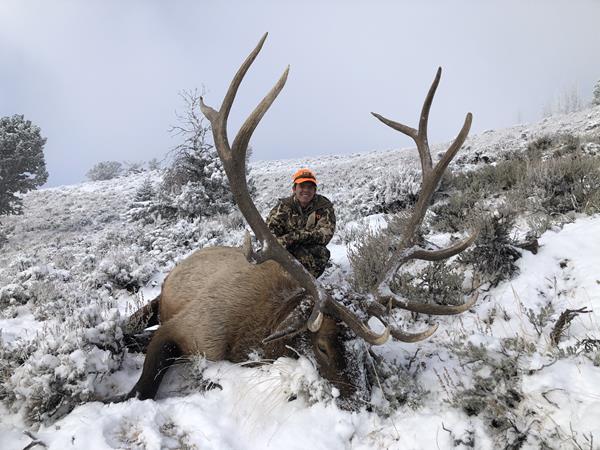 Sometime mid-summer, I got a call from a number that I didn’t know. I answered it, expecting the caller to be a telemarketer, but I couldn’t have been more wrong! The caller, Glenn Pauley, informed me that I had just won the Wyoming Elk Super Tag! Along with the Super Tag, I also got a much needed clothing package from First Lite. I had no idea how I had just won something that was going to change my life. The work soon began as I had to do a lot of research to decide which outfitter I was going to go with. After some late nights of researching and some phone calls to previous years’ winners, I decided to go with Tre Heiner of Washakie Outfitters.

After a few long months of preparing for my hunt-of-a-lifetime, it was finally time to hit the road for my late season elk hunt. My grandpa and I split the 13-hour drive from Nebraska to Wyoming into two days. We were going to pack in with the horses on Saturday, November 7th, but we got into town early enough on Friday that Tre said we could just go in that afternoon to get settled. After getting all of our gear loaded on the horses, we rode a couple of miles to our base camp. Once we got camp set up and ate supper, we went to bed.

Early the next morning, Tre and I got on the horses and set off in the dark. My grandpa stayed at camp because Tre thought the country would be too much for him, and I think he was right. We made our way up to a ridge where we could glass, but we didn’t see anything, so we kept moving. After going through some more timber, we arrived at the top of a small mountain where we could see a large herd of elk over a mile away grazing in a meadow. There were probably 25 bulls in there with cows, but none of them were the trophy bull we were after. Tre and I watched them for a while and listened to one bugle, which was unusual that late in the season. This was the first, but hopefully not last time, I ever heard an elk bugle in person. We continued to press on to a couple more vantage points only to find a couple more young bulls.

After glassing for a while, Tre spotted the size of bull we had been looking for. The bull was grazing on the edge of a meadow by himself. We started down the mountain at around noon, so we ate a little lunch because we would probably be up there until dark. We started our way up the mountain toward the meadow. About halfway there, we left our horses and walked the rest of the way. We waited for the big bull to come out towards evening, but the only bull that came out was a smaller 6x6 that wasn’t quite shooter worthy. I was glassing and happened to spot a 7x6 somewhat close to camp. We decided to stay put and wait for the big bull to come out, but he never did.

The next morning, we decided to leave the horses and walk to an open spot where we could glass for the 7x6. After a little while, Tre spotted him and I got into position to shoot with Tre’s rifle. I could only shoot out to 400 yards with my rifle, but the bull was at 750 yards walking up a mountainside. When the bull was in a good spot to take the shot, I fired twice and missed both times. Quickly, we moved closer to where we could see better after he walked behind cover. We got to where we could see the whole mountainside, but he was nowhere to be found. I was pretty disappointed in myself that I missed. Tre then asked me if I wanted to go back and get the horses and eat something or start walking up the mountain after him. I looked up the mountain and saw how long of a walk it was and I didn’t think I could do it. I made the call to go get the horses, which turned out to be the right choice. While we were eating a late breakfast, a fog moved in and we couldn’t see anything, but it lifted after a couple of hours of being stuck in camp. We were halfway up the mountain with the horses when the fog came in again. We continued to go up the mountain and wait out the fog up there. After a while, it started to snow pretty heavily, so we went back to camp to dry off.

The next morning, everything had turned white and was frozen. Tre and I started up the same mountain, the one we were on the night before, to look for the 7x6 again. Not too far into our ride, Tre saw the big bull that we had seen two nights before in the same meadow. We changed course and went toward him instead. The bull was about 1,800 yards away when Tre looked through his binoculars to see if he was still there, and he was staring straight at us. Tre said that the bull had heard the horses somehow. We watched and waited until he wasn’t watching us anymore to make our move. We tied up our horses and went the rest of the way on foot through the timber. That hike was hands down the hardest thing that I have ever done in my life.

After seriously struggling with the thin air and losing my footing a few times due to the slick snow, I made it to the rocky point that we were going to stop at. We slowly came up to it and looked out across the meadow. To our surprise, the big bull was still out in the open about 250 yards away. We stacked our backpacks on top of each other so I had a rest high enough to shoot over the rocks in front of us. The bull was facing straight away from us for a while, but he finally turned just enough to present a good broadside shot. I shot and hit him. He started to slowly walk towards us with his head up, so I shot again. After my second shot, he went down.

It was the craziest thing to think that I was dreaming about going on a big hunt since before I was 10 and getting to see places that few people would get to see in their lifetime. Now, here I was at 17 years old, sitting on a mountain with the biggest bull I would probably ever shoot on the ground 250 yards in front of me. As I walked up to him, I couldn’t believe how much mass he had on his antlers and the length he had on his main beams. We had thought that he was a 6x6, but he had an extra 3.5" point that grew off the top of his brow tine, making him a 7x6. We started a fire that I kept burning while Tre quartered him out. Luckily, we were able to take the horses right up to him. We got the antlers and all the meat back to camp by 4:00 that evening. My grandpa saw the antlers, and he couldn’t have been more proud and thankful that I had gotten a bull.

That hunt was the hardest thing I have ever done. It’s nice to be out in the mountains, but I was ready to go home. Tre told me that he has guys who tap out after a few days, and I can see why. The day I shot my bull when I was going up the mountain, I was wondering how many more days I could keep going if I didn’t get that bull that day. I knew I was never actually going to tap out, but I knew there was going to be a point when I would want to. I would totally do it again, but I would probably train a little harder beforehand.

I want to thank Wyoming Game and Fish for providing me valuable information about hunting in Wyoming and First Lite for the clothes that kept me warm and comfortable. I want to thank my grandpa for sharing the love of hunting with me. Also, a very special thank you goes to Tre who is now a forever friend and who worked twice as hard as I did to get my bull- of-a-lifetime.