Taking Things As They Come 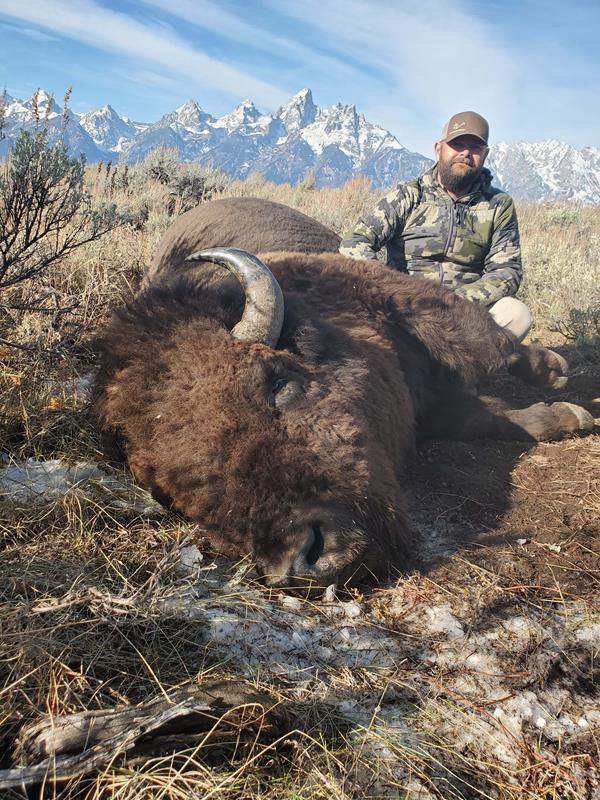 No matter how much you have hunted or how much experience you think you have, there is always an opportunity to be humbled and educated. I was fortunate enough to have two such hunts at the same time. I drew both a Wyoming mountain goat tag and a Wyoming bison tag. Some may call this lucky, others who know what each hunt is like individually might think differently.

For the bison hunt, it was more planning and researching the area than boots-on-the-ground scouting. Road access, past hot spots, best hunting dates, and likely travel routes were the main things to figure out. This meant contacting local Game and Fish and anyone who had the tag in the past. I was fortunate enough to have some quality intel from friends and family who were successful in past years.

Both of my tags were in the same general area, so my plan was to try and hunt them both a few days each time I made the trip. My first four trips consisted more of me playing cat and mouse with a wily old mountain goat than bison hunting. However, I did get about five days of solid bison hunting in with no initial luck. All of the bison I could find were still in the National Park, which is off limits to bison hunting.

After I returned home from the fourth trip, I decided that I was not going to go back unless I had at least one person with me. Between running my landscaping company and guiding some elk hunters, it was looking like I wouldn’t get back until mid- November. I also had a trip planned to whitetail hunt in Illinois and would be leaving November 1st. That was until I got a call from my friend who I was hunting with in Illinois. He had the Coronavirus and had to quarantine for 14 days. This put my trip off until the 6th, so with some newfound time, I decided I was going to get back after the bison for those days. A few days before this all occurred, my cousin, Tom, had said that after November 1st he was good to go with me.

Tom was lucky enough to successfully harvest a great bull in 2007, and he was really excited to come along and get to experience it again. We started by hiking to a few glassing spots I had discovered in past trips, but just like all the previous times, the bison were in the park and not on National Forest. We decided to scout out some other parts of the unit, even though there had not been any bison there yet this season. Most of our glassing provided the same result, no bison. We decided to take a road that ran the boundary of the park and the forest. As we rounded a corner, a truck was parked just next to the road, and as we pulled up, the two guys were out of their truck and field dressing a bull bison. My jaw must have dropped as I processed just how lucky they had gotten. We talked with the men for a couple minutes and they said about 60 head had gone through this small corner of the National Forest. They took the first bull that presented a shot.

The men said the bison headed south, so we headed that way to see where they were going and if they might be going towards the forest. A few miles down, we spotted the herd, but they were headed further into the park rather than towards the forest. It was around 11 a.m., so we decided to run up a road neither of us had been down in a very long time. We spent the next few hours exploring other country but nothing new. We circled back around to the north, and I pulled off the highway to check on the herd’s location and to glass the area where the bison had come from in case there were any stragglers. After a few seconds, I spotted four bulls in the exact same spot as where the other guy had killed his bull earlier. I was glassing from a few miles away, and even though I figured I wouldn’t make it there before they got into the park, they were not moving, so we headed that way as fast as we could.

The path the roads went kept us from being seen by the bulls until we would be right on top of them. As we rounded the corner on the road, there they stood in a circle right where the other bull had been shot just hours before. The kicker was that we were not yet off the park, so we couldn’t shoot until we crossed into the National Forest. The bulls had seen us, but these park bison never seem scared of vehicles, so I was hopeful they would stay put long enough. Just after we crossed the line to be legal to shoot, the bulls took off running. I put it in park, flung the door open, grabbed my gun, and headed off to get set up for the shot. The lead bison started broadside, and I aligned the crosshairs and fired. It was certainly a hit based on the “thwack” from the bullet. I did not have time for a follow-up shot as they were into the park just seconds after the shot.

At first, we were not sure which one I had shot because they all bunched up and ran together. For the first few minutes, they were all acting the same. After they made it about 250 yards, they stopped and were just milling around. Bison are known to be very tough animals and hard to kill with just one shot. The rules of the park are that even if wounded, once in the park, you are not allowed to make a finishing kill shot, so all we could do was watch and hope for the best. After a few minutes, I could tell which one I had hit, but I was very uncertain if the single shot was going to be enough. After about 45 minutes and just before it was completely dark, the wounded bull laid down. The others stayed by his side, and since we were not sure how badly he was wounded, we didn’t dare walk out and risk pushing him further into the park where we had no chance of him coming back across the line. Our only option was to wait it out and check on things in the morning.

After a sleepless night we started glassing at sunup. We scanned the area thoroughly, but there were no bison in sight. We figured our only hope was that he had died overnight in that same spot, otherwise we had no clue where to even start looking. After a short walk out through the tall sagebrush, there the bull lay. The shot was in fact lethal. He had not gone anywhere from the night before. Things were not over yet, though. We had to make the call to the Parks Department and inform them of what had happened. They sent out a park ranger to do an investigation. After a thoroughly detailed walkthrough of the events the night before, the Park Ranger determined we had done everything by the book and allowed me to tag the bison. I made a quick phone call to Ralph, who owns a pack horse company called Tag-N-Drag, to assist with the pack out. I know it wasn’t far to the road, but I needed to get the bison out as quickly as possible. Ralph was hesitant because all he had available was a single horse, but he said he would head our way as soon as possible. In the meantime, we needed to get some pictures and start to get this thing into manageable-sized pieces.

One thing I can tell you about a bison is that two guys have zero chance of moving it, let alone rolling it upright for pictures. Luckily, the background couldn’t get much better, so everything worked out great. Ralph showed up with his horse named “Wide Load,” a 4-year-old Clydesdale. He hooked him up to his homemade sled and off they went. We got everything out in three loads, and I can’t tell you how glad I was to have the help of Ralph and his horse. I sure won’t ever forget how lucky I was on this hunt.

Things don’t always go as planned, and sometimes you just have to take things as they come. I can’t even express how grateful I feel to have had this all come together the way it did. The bull ended up scoring 112 6/8" B&C and provided me with 620 lbs. of packaged meat.