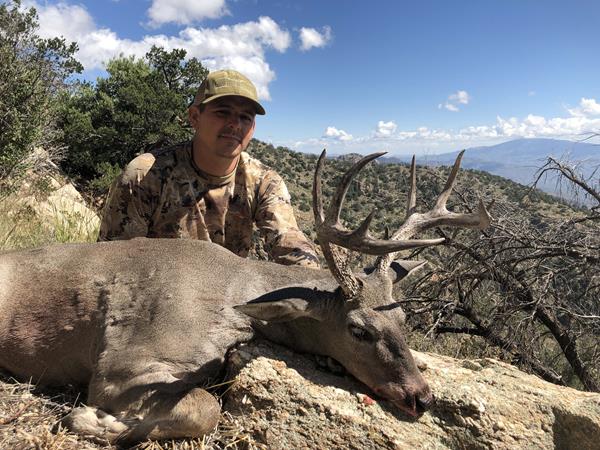 Finally, Friday morning had come. It was opening day of my 2019 Arizona Coues deer hunt. As deer began to pop up all over the place, it was now light enough to get out my Swarovski Twin spotting scope setup and look at the hills closely. As the morning progressed, we had not found the one buck I was looking for. It was now around 8:15 a.m., and my phone began to ring. I answered and was greeted with the best three words every hunter knows, “We got him!”

I had a little history with this specific buck I was hunting. It started in 2017 when I saw him on my trail camera for the first time. Straight, clean 4x4 Coues deer aren’t easy to come by hunting Arizona public lands, and he had the potential to become something special. I knew early in 2017 I would not be hunting this deer in order to give him a little more time to age and grow bigger. In 2018, I could see he had really put on more tine length. I decided not to hunt him to see what another year of age would do for him. I was guessing that he was a 6-year-old deer. When 2019 rolled around, I was pumped to see him on my trail camera again alive and well. Disappointed isn’t a word I would want to use, but this buck’s antlers were smaller, if not the same, as his 2018 set. 2019 was an outstanding year of moisture in Arizona. The rains hit at a perfect time. This was the best potential this old buck had before he started to really digress. I knew this would be the deer I hunted in 2019.

Weeks prior to my hunt were spent pounding the hills with glass and hauling in supplies. I spent many nights alone spike camped on a tarp in search of my buck. He eluded me every time I scouted the area, but he would always let me know he was still alive by showing up on my trail camera.

Wednesday, two days prior to opening day, I had backpacked into the country that I was willing and ready to call home for the next nine days. I was hunting a specific deer and was OK with coming home empty-handed. After a few hours of hiking, I arrived at the spot where I had stashed supplies weeks prior. It was still early, so I spent the remainder of the morning hammering the hillsides with glass, trying to locate my buck. Without any luck, I finished out my hike to where I would be spike camped. I spent Wednesday evening behind the glass without finding my buck and Thursday followed suit. Although, Thursday night, I had my two buddies, Kyle and Justin, backpacking in to help me kill this buck.

“We got him!” Justin whispered excitedly over the phone. We made a quick plan over the phone that I would pack my camp up and bring it to where Kyle and Justin were. I arrived at their camp and was relieved to hear that my buck had not moved at all. He was tucked in a small cut out of the wind. We still had a long way to go to kill this deer. I wanted to be at a spot that would give me plenty of elevation on the deer in order to relocate/shoot from, and we guessed this spot would put me around 300 yards away. We decided Kyle would stay back to keep an eye on my buck and Justin and I would move on him.

As the crow flies, my buck was just shy of a mile away. We moved up the hill at a decent pace, all while getting text updates from Kyle about what my buck was doing. It took us about an hour to hike to where I wanted to relocate and shoot from. We stopped just short to put our binos on the tripods, for me to get my rifle out of my pack, and so I could hand off my rangefinder to Justin. A quick range to the hill my buck was on told us 380 yards. We were now well within my comfort zone of shooting.

Justin and I crept up to where the hilltop crested over. It was a perfect place for me to get prone and shoot from. I got my rifle set up on my pack with the bi-pod up front. Now it was time to get in the glass and try to relocate my buck. We were a little puzzled at first. Kyle said he could see my buck, but we weren’t able to. After figuring out different angles, we decided my buck was behind a few boulders that were blocking our view. There was a small window next to these boulders where we could see a small, lone mesquite tree that was on the same hill as my buck and confirmed that Kyle could see this same tree. Kyle told us my buck was feeding toward that lone mesquite tree. I got out of my glass and into my rifle, chambering a round and finding the lone mesquite tree in the scope. About a minute later, Justin told me he could see my buck’s head coming from the left. He told me where he thought my buck was going to step out and ranged the distance for me. 366 yards confirmed. I twisted my elevation turret to 5.5 MOA and gave 0.5 MOA for windage to the left. At this point, I could see my buck’s face. I watched him feed out and turn directly away from me. I lay there with my crosshairs on him, and he started to slowly turn. He was slightly quartered away. Perfect! With my crosshairs rock solid on my buck, I started my squeeze. Boom! The trigger broke, sending my 215-grain target hybrid to my buck. I saw him kick and the dust cloud behind him, but he had jumped out of sight. We knew he was hit, but we were a little puzzled as to why he didn’t drop in sight.

After a quick conversation and phone call to Kyle, we decided he was dead. Justin and I picked up and climbed our way over to where my buck stood when I shot him. Instantly, we had blood which took us downhill about 80 yards to my 4x4’s final resting place. This buck was well-earned, not just for me but for all three of us. Justin and I gave some high fives, and I pulled my buck out to get my hands on him. The shot was textbook with a silver dollar-sized exit hole out the opposite shoulder.

It is always a bittersweet ending once you catch up with the king of the mountain. I had become obsessed with this buck once I made the decision that I was going to hunt him and tried to gather as much information about him as I could. I love to hunt Coues deer more than any other animal in Arizona. They are incredibly unique, and there is nothing else like them. Finding big, mature Coues Deer is my passion. A good buddy of mine, who is a wildlife biologist, aged my buck at 6 to 8 years old from his bottom jaw. He isn’t my biggest scoring Coues deer, but he is a buck I had the longest relationship with that I have killed and he will have a special place on my wall.