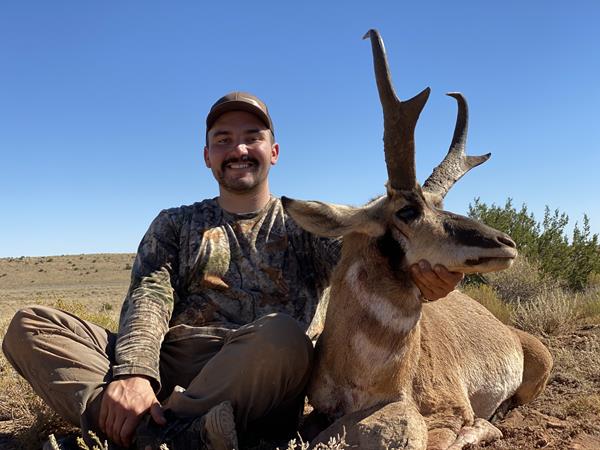 “I have 28 bonus points for antelope, I should be able to draw a tag this year,” my father said as we discussed our plans for the upcoming fall. Only having 5 bonus points myself, I wondered what my life may look like 22 years from now, or however many years it may take to draw an antelope tag.

Admiring my father’s Pope and Young antelope he harvested nearly 30 years ago, I told him that I would like to put in for the unit 10 antelope tag as it offered the largest number of rifle antelope tags in the state. This created a subtle dispute between the two of us because my parents just purchased a home in one of Arizona’s most coveted antelope units.

I remember telling my father as I left their home, “Please just listen to me and put me in for unit 10. I just want an antelope tag.”

As I headed down the hill back to the valley, I was thinking, “It doesn’t matter what unit he puts me in for, I’m not going to draw any antelope tag with 5 points.”

A couple months passed, and I was at dinner with my girlfriend, Courtney, and her family for her birthday when I received a text message from my father, saying, “Check your card tomorrow morning!” Suddenly, I remembered that Game and Fish would be hitting credits cards for the 2020 fall hunts the next day. Not thinking too much about it, I continued with my night and enjoyed the rest of the evening.

The next morning came and I woke up, immediately checking my bank account. There was a $90 charge from AZ Game and Fish. I couldn’t believe it. I screamed franticly as I felt I had just won the lottery. Immediately, I called my dad and yelled, “I drew an antelope tag. We’re going to unit 10!”

He chuckled, “Are you sure it’s not my tag since I have 28 bonus points?”

“Yes, I gave you my credit card information before I left. This is my tag!”

He responded, “Well you might be right about that, but you may be wrong about what unit we’re hunting.”

Confused, I said nothing and waited for him to elaborate. “I put you in first choice for 5B.” Part of me was angered my father did not listen to me, but the other part of me was ecstatic and hoping his unwillingness to listen would give me the tag of my dreams. With uncertainty and anxiety building up about what unit I drew, we had to wait an entire week to see what unit I would be spending my summer in.

The next day, my girlfriend and I left for California to celebrate her birthday. I was unsure how I would be able to enjoy this trip, still unsure which unit I had actually drawn. Surprisingly enough, I was able to enjoy my time away from Arizona as best as I could. A week had passed, and the day finally came. I called the Arizona Game and Fish hotline to see what unit I drew. Sitting on the beach in San Diego, I was hoping to hear the hunt number 02009. My prayers were answered, and it was official. I drew a 5B rifle antelope tag with only 5 bonus points.

As spring evenings turned into summer nights, we really began to pick up on the scouting. On July 3rd, we had gotten a heads up from our friend, Matt, that there was a good buck he had seen and that we should try to locate him. With Coronavirus minimizing any sort of Fourth of July celebration, my father and I took advantage of this and went to try to locate the buck the next morning. My brother-in-law, Eric, jumped in as well.

We were in the area where this buck had been seen and began driving down a road that led to a water supply when my father saw several does about 100 yards off the road. As we stopped and looked in that direction, a buck stood up from his bed.

The three of us were in disbelief with the character and the commanding presence he had. We were able to get a better look at him through our binoculars and were able to take a couple of pictures before he and his does began to trot off over the ridge. The three of us got back into the truck, happy to have located him. Needing an easy way to remember this unique buck, we all decided he needed to be named. As we sat in the truck silently, no names came rushing to our minds. Then the Marty Robbins song “Big Iron” came on over the radio and broke up the silence. That’s when Eric said, “Big Iron should be his name.”

Over the next eight weeks, I spent 25 days in the field leading up to the hunt and had several friends spending upwards of an additional 50 days combined in the field. We had seen a lot of bucks, but none got me more excited than Big Iron did. Over those eight weeks, we saw big Iron six different times, patterning him to the best of our ability. My friends, Jon and Austin, came up with me the week before the hunt started and we were able to locate our three target bucks Tuesday morning.

Thursday morning came, and we had not seen Big Iron since Tuesday evening. We spent all day trying to relocate him but did not have any luck until Thursday night. That’s when Jon and I split up and spread ourselves over two different ridges. I had no sight of Big Iron and began to get frustrated, and then my phone rang. My phone screen lit up with “Jon Moeck” scrolling across the top. Not knowing what he was going to tell me, I answered. He said, “I got Big Iron, get over here.”

I knew by his tone that he was being serious. I grabbed my pack and spotting scope and ran over to the next ridge where Jon was. He put me on Big Iron in my spotter and we watched him “rule his roost” until last light. We walked back to the truck in total darkness, both knowing this would be a long, sleepless night.

We met up at camp with my father and Austin where we talked about our game plan for the next morning. The four of us crawled into bed awaiting sunrise and excited to see what the next day would bring.

Four a.m. came early, and we were in position before the sun came up. Everyone split up, but I stayed with my father. Within 20 minutes of being in the field, we relocated Big Iron. The four of us created a plan to get into shooting range. Austin and Jon stayed back as spotters and my father and I took off. We needed to cover at least 900 yards to get into position. Big Iron and his does were moving away from us the entire time, so it seemed as we were very slowly getting closer. We made it to 900 yards and needed to close the gap fast as they were heading into the cedars. My father and I both got on our hands and knees and crawled as fast and as quietly as possible for about 10 minutes, often looking up and seeing Big Iron looking in our direction as he knew something was up. After an hour and forty minutes, we cut the distance to 500 yards. Knowing we were not going to get any closer, we set up for our shot. I laid prone with my gun on my pack. As I located Big Iron in my scope, my dad whispered, “494...”

I dialed my turret to 500 and got back in the scope. He was still headed away when he turned to the left and gave me an opportunity. I took a deep breath and squeezed. Boom! The gun went off, and I heard my dad yell, “You hit him! He’s going down!” Disoriented from the repercussion from my 28 Nosler, it took me a second to realize that it was over and all the hard work had paid off. Everything came full circle for us on September 4, 2020. Big Iron was down, and it was done by 7:40 a.m., exactly two months to the day from when we first saw him.