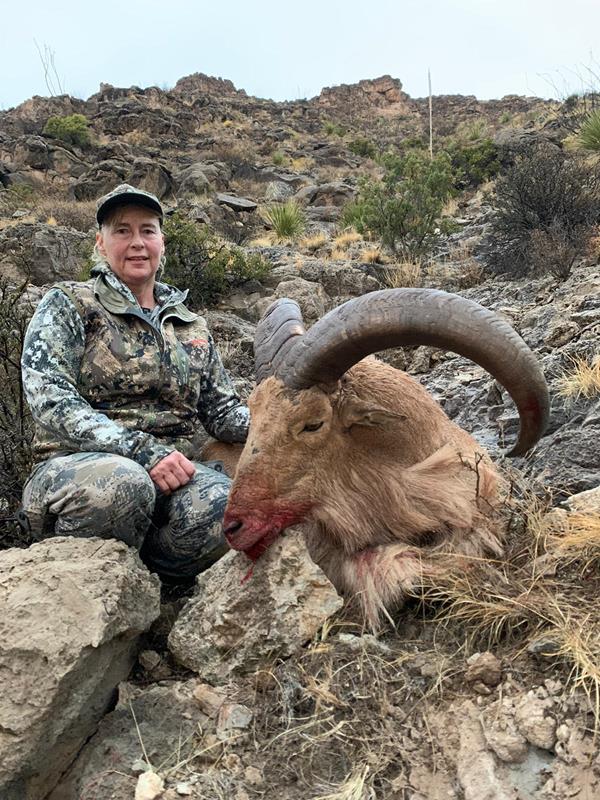 In January 2020, I traveled to New Mexico to hunt with Hunt Hard Outfitters where I was lucky enough to draw a public land tag for Barbary sheep. I was successful, but things did not go the way I had hoped and our target ram slipped away. To my surprise, my husband, Bob, and I both were fortunate enough to draw Barbary sheep tags in December 2020. Countless nights were spent dreaming about chasing giant rams and fulfilling redemption from the previous hunting season.

December 7th was to be our first day of hunting. Opening day consisted of a lot of hiking along with passing multiple smaller rams. On the evening of the first day at last light, one of our guides and owner of Hunt Hard Outfitters, Jeff Lester, glassed up several shooter rams that we would hunt in the morning.

The next morning, a plan was calculated, and we attempted to stalk in from above the sheep. They were spotted at first light but were moving away from us. Jeff and my guide, Christopher, decided it would be best for Bob and Jeff to drop off the hill and pursue the sheep as Christopher and I would drive around from the bottom and stalk in from a different angle. There were close to 50 sheep in this herd with multiple shooter rams.

Through the morning, the sheep divided into two smaller groups. Christopher and I climbed to the peak of a big mountain and got into position to shoot at one of the groups while Bob and Jeff were in position with a great ram in Bob’s scope. Bob and Jeff decided this ram qualified for what Bob was looking for and he squeezed off four shots, with every one connecting. Unfortunately, my shots did not connect and the hunt continued. Little did I know, I would have another run-in with this same ram.

Bob had his ram down, and with that, Bob and Jeff quartered the ram out and packed him down to the truck while Christopher and I stayed on the hill glassing. The big ram was spotted again around 4 p.m. but not with enough time to get to him as he was about two miles out and across two giant canyons. Again, a plan was made for the morning of the next day.

Day three consisted of wind and smaller rams and ewes with no sight of the big ram from the night before. On day four, we decided to try a new spot and again only small rams and ewes were seen. We were in piles of sheep, and it was only a matter of time until we would run into a shooter ram. During lunch, Jeff decided we would go back to the canyon where I had missed the ram two days prior. We parked the truck around 2 p.m., Christopher and I started our trek into the rocky canyon. It was a beautiful day with overcast skies and little to no wind. As we crept through the bottom of the canyon, the overcast skies turned to rainclouds and it started to sprinkle. Christopher spotted some sheep on the side of a cliff, but again, there was no shooter to be found. As we ventured on, the sprinkles turned to a heavy rain, and with light closing fast, we were to turn around and head back to the truck soon. We decided to peek into one last draw before turning back.

This decision proved to be wise because as we came around the corner, my trusty guide, Christopher, spotted a herd of 13 sheep with a giant shooter ram. We were 500 yards but figured we could close the distance with one bench between us and the sheep. We belly crawled 100 yards to get out of the line of sight with the sheep and proceeded onto the bench where we would shoot from. I got set up and dialed the gun to 386 yards. Now we just needed the ram to step clear from a ewe that was standing behind him. The ram stepped forward, and Christopher confirmed to me to take the shot. Boom! I had hit high and missed. I was thinking, “No way, not again.” The ram ran 10 steps towards us and stopped, not sure what was going on in the rain and fog. I got back on the ram and squeezed a second shot. Whack! A solid hit! The ram then started sidehilling, and Christopher said he was going down. As he dropped, so many emotions ran through my mind. All the sweat, hiking, and glassing had paid off.

As I walked up to the ram, he was everything I could want and so much more. Stretching the tape to the lucky 30" mark was something special and everything I could have asked for. I had my redemption. Thanks to Christopher who kept me calm and focused during the fiasco of me shooting and for putting me on sheep every day. Also, a huge thank you to Jeff Lester at Hunt Hard Outfitters. We got to Hunt Hard and put two great rams down. Without Jeff, this would not have been a possibility as I was lucky enough to draw two tags in two years through the outfitter draw pool that New Mexico offers. Hunt Hard is a top-notch outfit, and I cannot wait to do it again.