The Highs and Lows of the High Country 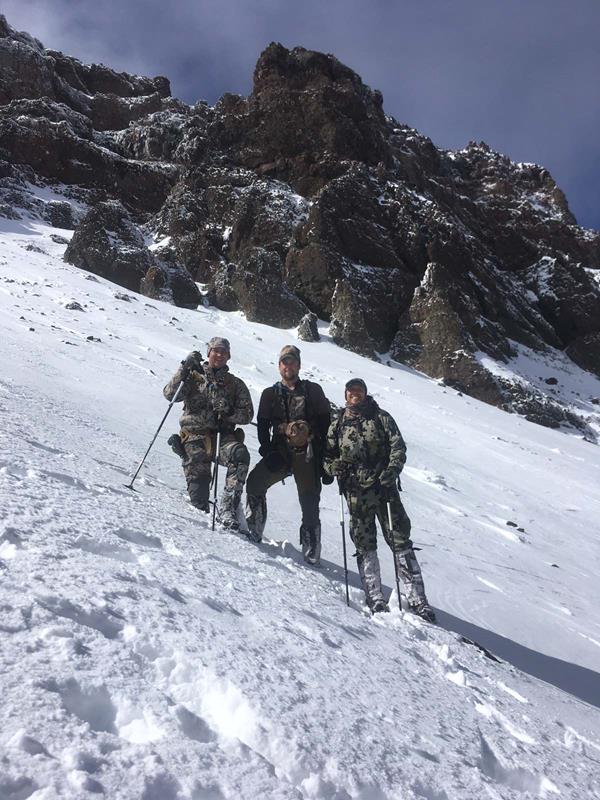 My journey to the high country started on June 12, 2017. After years of applying for the big three in Montana, I was shocked to see a mountain goat license in my list of “successful” applications. Riding that high, I began to text many of my friends who had been playing the same cruel lottery I had for the last few decades. The list of people who wanted to go grew to as many as 12 and then dwindled down to 2 in the end. I would be accompanied by two of my best friends, Chris Tschida and Eric Denault. Let’s fast forward to August.

My goat season officially started August 15th, but with the hot weather and high fire danger, we opted to forego our planned scouting trip and bank on some advice from a few friends who had been there before. It was decided that September 30th would be the day we hit the trail. Little did we know that a freak early snowstorm would dump two feet of snow where we were going to camp in the middle of September. I nervously watched the SNOTEL site nearest my destination as the total snow pack climbed and then fell for the next two weeks.

The day finally arrived, and we hit the trailhead an hour before light with heavy packs and high expectations. By noon, we were in goat country, staring at the 1,200 vertical foot climb that lay between us and where we were to call home for the next five days. Halfway up, I spotted the first goats of our trip, a nanny with a kid feeding on a wind-blown slope a mile away and well above us. We finally crested the avalanche chute and made it to the frozen mud puddle that would provide us with water for the hunt around 3:30. A quick scan of the area we could see from camp turned up three big-bodied goats well over a mile away in an area that wasn’t accessible from where we were. Then the storm hit with sideways gusts of snow.

We hurried to clear a spot and set up our tents before the conditions got worse. By 5:00, we were in our tents, waiting out what we thought would be a short-lived squall since the forecast had called for three days of good weather to start the weekend. As evening turned to night, the storm intensified. The temperature dipped down to 15 degrees with a 40 mph wind, and the snow began to pile up. This was turning into the most miserable night of my life. I finally dozed off at some point only to be startled awake by the wind. I felt well rested considering the circumstances. I checked my phone, thinking it must be at least 5 a.m. Boy was I wrong. It was 11:08 p.m., a mere three hours after I had finally succumbed to slumber. After that, I didn’t sleep more than 10 minutes at a time for the rest of the night. By morning, my tent was full of snow and the drift outside had collapsed the roof on top of me. Chris and Eric fared only slightly better in their neighboring tent. We decided that without the resources to build a fire at 10,000 feet, we had better plan on retreating to the timber before nightfall.

As the sun came up, the storm began to break. If it wasn’t winter up here before, it definitely was now. We glassed the area where we had seen goats the evening before, but they were gone. We spotted a mule deer doe and fawn as they ran past camp, headed to the safety of the timber below. That’s when I noticed another set of tracks in the fresh snow. The tracks headed towards the avalanche chute we had climbed up the day before, so I told Chris and Eric I was going to go check over the edge while they got ready for the day. I made it a couple hundred yards from camp when I looked up and saw my goat! I was well within range at the time, but I was also alone. I knew that if I didn’t go back to camp and get Chris and Eric to film and spot for me they would never forgive me. I felt like it took forever to get back to camp in the thigh-deep snow. Within minutes, we were back in range with the cameras and spotting scope set up. At 414 yards, it was hard to see the horns, but the long face, sway backed, and yellow hair had us convinced it was a billy all by himself. We decided he was a shooter, and I got dialed in for the shot. The plan was to hit the front shoulder to anchor him where he was. Things don’t always go as planned, though. I hit behind the shoulder with three consecutive shots. The goat traveled about 50 yards and then died hanging off a 200 foot cliff in a spot where we couldn’t safely get to it not being trained or prepared rock climbers. Dejected, we headed back to camp to pack up, hoping the goat would somehow roll off the cliff, but knowing full well it wouldn’t. A couple hours later, we were packed up and headed back to the truck with the goat still on the cliff, but with a plan to return to civilization, warm up, and find help as soon as possible.

We headed to the local hot springs and rented a room where we could dry out all of our soaked gear while soaking our pain away. I called everyone I knew, hoping that someone would have an idea we hadn’t thought of yet as to how to rescue my goat. Monday morning, I called a helicopter company only to be told that if it was legal it would be a long shot at best. Then I called Sam Magro at Montana Alpine Guides, and he told me he could climb to it with no problem. It took us all day to get permission and secure the proper permits to make this happen. Tuesday morning, we headed back in to get my goat. It had been two days and there had been one more big snowstorm since we had left it high up on the cliff. Not knowing what to expect, I was both nervous and excited as I watched Sam climb his way to the goat. When Sam got there, he discovered that animals had destroyed the hide by picking all the hair off the exposed side. My roller coaster ride of a goat hunt ended with not the prized billy I sought, but instead, only the head of a truly old 9 1/2” nanny.

October 1st is the luckiest day of my life. Seven years to the day before I was able to harvest my first mountain goat, I married the love of my life. Yes, that’s right, my wonderful wife, knowing it was the only weekend I had to pursue my dream of harvesting a goat, gave me her blessing to be gone hunting on our anniversary. She’s a keeper! I end this story with special thanks to my wife, Sara, my friends, Chris and Eric, and Sam Magro of Montana Alpine Guides for helping me fulfill my dream hunt.