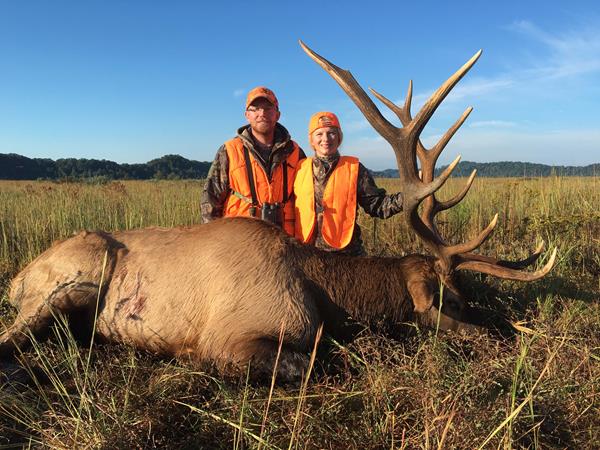 For years, I’ve referred to myself as a hunter’s widow. This is because my husband has a sometimes unhealthy but understandable obsession with hunting. It’s been a part of our relationship since day one, and little by little, I’ve become more accustomed to it, even doing some hunting with him. It wasn’t until he won the Kentucky Commissioner’s elk tag from the Kentucky Houndsmen Association raffle and gave it to me that I began to understand this obsession. If you’ve ever referred to yourself as a hunter’s widow or you don’t quite understand your husband’s obsession with hunting, then this read is for you.

This hunt was amazing for so many reasons. First, I was with my husband, who chose to share his passion with me. Second was the outfitter; the crew at Lost Mountain Outfitters was amazing. They welcomed us with open arms, and they prayed before every meal, which was an unexpected charm. Every time we came and went from camp, the fire was going. Spare moments were filled with stories, and each guide genuinely wanted their client to get that big one.

The hunt started with scouting, getting up before the sun rose, listening, hoping, and wanting to hear that bugle. When I heard a bugle, my heart jumped, paused, and then jumped a little faster. The first day, we were fortunate enough to get set up and call a bull in. I considered drawing back, but it just wasn’t the one. The evening hunt was similar as we waited, wished, drove around, walked around, and looked.

The excitement intensified when everyone else started showing up for the opener of rifle season. That night was a scouting mission, and it turned up the heat more than anyone could imagine. We belly crawled up a ravine and looked down over a meadow to watch some bulls and cows. There were a lot of bugles. We watched for quite a while, and I hated when we had to back quietly out of there. I knew the morning would bring the biggest anticipation of my life.

It was early in the morning, earlier than I would ever consider waking up on a normal day, but it didn’t seem painful and there was no desire to climb back in bed. The sky was clear and the stars were bountiful and shining as we drove quietly down the road. When we got there, it was still too early to even consider getting into our location, so we waited. We were hushed voices staring at the stars, knowing we could do nothing until daylight broke.

Finally, it was light enough to start getting into our location. If the elk were there like the night before, we were going to attempt a double with another hunter from camp, Corbin Ladner. I had to be ready, not knowing when this would happen. We walked into position, but the bull wasn’t where we had expected. All of a sudden, the shot was upon us, but it wasn’t meant to be as the bull slipped over the ridge. We hustled in the fog and the dim sunlight back to where we had spotted the elk the night before. My fingers were crossed the entire time that things would come together as we had hoped.

Out of breath and so excited, we were where we had been the night before. My heart was pounding, and I didn’t know what was going to happen next. We peered over the ridge into the valley, and both bulls were there. I was going to be the second shot, so I had to hurry to be ready but also wait. It was a quiet chaos of, “Do you see him? Do you see him? Are you set up? Are you ready? Do you see him? Are you set up?” My heart was pounding, and my aim, I hoped, was steady. My husband’s voice was in the background, and I was locked on my bull, waiting for the shot of the hunter next to me. When his shot rang out, my finger instinctively pulled the trigger, and without hesitation, I reloaded. I had been practicing that moment months before this hunt. The bull fell over, but he wasn’t dead yet. Then, the panic set in. Had we each got our bulls? Before we felt confident to shoot again, we had to be sure we weren’t shooting at the same bull, a cow, or anything else in the craziness of that moment.

All I could hear was, “Kill ‘em! Kill ‘em! Shoot again! Take your time. Do you have them in your sights?”

Although my hand was steady, my legs were shaking uncontrollably and my heart was pounding. I could see the bull lying dead in the grass, but I was fearful that he would get up. I shot again, and in my hurriedness, I must have missed. With one more shot, I felt more confident that he wasn’t going to get up and run away. This was the shot that put him down for good. I was so excited. All I could think about was this bull I had just harvested. After the other hunter was assured the same, it was time to get up close to these bulls.

As much as I just wanted to run down that hill into the valley, we knew we had to walk carefully, and we did. As we got closer, the magnitude of the bull set in. I could hardly lift the antlers, and I could not stop smiling. We field dressed the bull, loaded him up, and took him to camp. I proudly wore my “war paint” of the blood smeared on each cheek as I helped field dress my bull. Camp, the weigh station at the Tractor Supply hosted by the Game and Fish Department, and the locker where we took our bulls for processing were all filled with congratulations. It was a hunter’s bond.

The next couple of days that we spent at camp were just as joyful. I tasked myself as camp cook and made sure meals were ready as the remaining and new hunters at camp and their guides went out each morning and afternoon in the hopes of having the same success we had.

I think I now understand that feeling that drives my husband to work so hard so that he can take those few days a year to go chase after elk, bear, pigs, deer, gators, or anything else that he can. Although I am still often a hunter’s widow, I know that our future will contain more hunts together, and that makes the days of him being gone a bit more tolerable. For these moments with him, I’m grateful my husband shared his passion with me. However, I also want to acknowledge that none of this would be possible without the amazing organizations like the Kentucky Houndsmen, the great crew of Hurley Combs and his guides at Lost Mountain Outfitters, our military with all of their efforts to keep our freedoms, our special angels in heaven who we know had the best view of that hunt, and God, who, without our faith, none of this would matter.