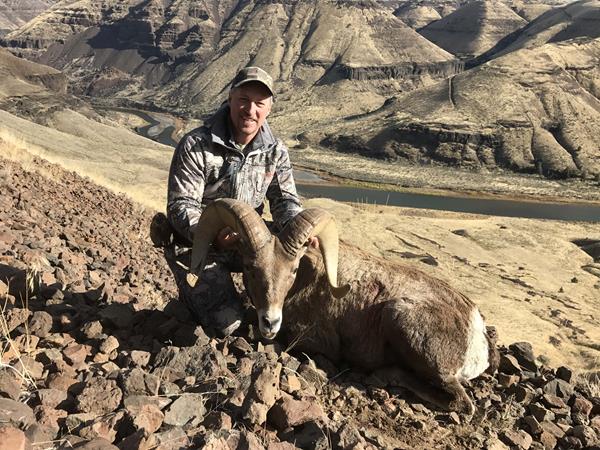 After applying for bighorn sheep for over the past 20 years, words cannot describe the feeling one experiences when your ticket is pulled. The emotions run the gamut from total disbelief to doing backflips down halls at work followed by franticly texting all the hunting buddies in your contact list. I wish every hunter could experience that feeling of hitting the lottery once in their lifetime.

In Oregon, there is no point system for bighorn sheep, so everyone has an equally tough opportunity to draw. I had been building points for blacktail deer as a non-resident for many years in Oregon, but when I discovered it only cost $8 to put in for bighorn sheep after buying a license, I figured, why not? You can’t get drawn if you don’t apply. As a result, I drew a second season, non-resident West John Day River bighorn sheep tag after the second year of applying. That’s five non-resident tags out of about 2,500 applicants or about 1 in 500 odds.

The day I drew the tag, I instantly got on the internet when I got home from work and started searching for videos of hunts on the John Day River. One that caught my eye was a hunt that Rick Young was assisting on. Rick was the original host of Northwest Hunter, which was one of the first outdoor TV shows on the Outdoor Channel. I have an outfitter friend in Alaska who is good friends with Rick. He contacted Rick for me and let him know I had drawn a John Day River tag. I subsequently gave Rick a call. He was a wealth of information. He told me he had helped three different friends and family members harvest their rams in this area. His main question for me was, “Are you going to float or not?” I told him I thought the idea of floating was very intriguing and looked like a great adventure. He said that he had done both and would highly recommend paying the trespass fee to gain access to the river and not float. He gave me the names of a couple of ranchers who provided access on the west side of the John Day.

I discussed the pros and cons with my hunting partner, Ron Spliethof, and we both agreed that coming in from the top gave more flexibility. I quickly called Byron Carlson, who was one of the ranchers Rick recommended, and set up a time to check out his access and ensure I had something locked up.

On July 8th, I made my first trip, which was a five-hour drive from my home in Arlington, Washington to Kent, Oregon, to meet with Byron. He shared many pictures of 170+ class rams that had been taken by hunters accessing his property. He was very open and honest that the drought had really affected the sheep over the last four to five years and he figured the best ram would go around 165" tops on his property. I gave Byron a deposit and proceeded to make five scouting trips out to the John Day River before the October 30th opener.

Byron recommended I call Steve Frasier, who owns the Breaking Winds Lodge just out of Moro, Oregon, to arrange a place to stay. This proved to be a perfect base camp with all of the cooking amenities and more and was only 20 minutes from Byron’s property. Steve and his wife are some of the nicest people you will ever meet, and the accommodations and hospitality were awesome. Steve was also a wealth of information and gave me some additional leads on hunting access.

The second season on the John Day River opened on a Monday, so that gave my scouting team and me the weekend to locate the potential rams. Accompanying me on the hunt would be my hunting partner, Ron Spliethof, my oldest son, Dakota, my longtime hunting partner, Kevin Lee, who flew up from California, and my coworkers, Dustin Harrington and Brandon Rutter, from the parent company I work for located in Albany, Oregon.

We split up on Saturday into two teams, each with spotting scopes and Phone Skopes. Dustin, Brandon, and I went one direction while Ron, Dakota, and Kevin went another. We saw numerous rams that morning but nothing exceptional. About midday, Ron sent me a text saying that he thought he and Kevin had found the sheep I was looking for. When we regrouped that evening at the lodge and reviewed the pictures of the sheep that Kevin and Ron had found, we concurred that both rams in the picture were bigger than anything we had seen that day or that I had seen in all my previous scouting. The mental picture of the ram I wanted to harvest would be as heavy as possible without being overly boomed and a dark chocolate color. Overall score was secondary to me. The one ram appeared to have all the characteristics I was looking for. The rams were with ewes, so we rationalized that they were not going anywhere and would be in the same general area come opening day. We planned to scout Bryon’s property on Sunday to see if we could locate something better.

We again split up, and each of us looked over numerous rams on the second day. One ram stood out that would probably go in the 160s, but we did not get a really close look at him. After a full day of scouting on Sunday, we decided to go back and look at the rams Ron and Kevin had Phone Skoped the day before. Dustin and Brandon begrudgingly had to be back to work on Monday, so that left Ron, Kevin, Dakota, and me to relocate the ram.

By noon on opening day, Ron and I had found a group of ewes in the general area of where he and Kevin had seen the rams two days before. We watched the group in the base of a box canyon, but there were no rams with them. After about an hour of glassing, two big rams appeared and we quickly put the spotting scope on them. We confirmed one was the ram we were looking for. The sheep were about 700 yards away, and most were bedded down. We had watched them for about two hours when a ewe suddenly appeared below and to our right. The ram came out of the bottom canyon to check her out and came straight up at us. He had started to broom off his right side, and it was frayed in a very unique way, so he was very recognizable. When he was at about 400 yards, I told Ron that this was the ram in the picture. Ron agreed but thought the other ram that was still with the ewes was a little heavier and possibly bigger but really broomed off. The ram came within 200 yards, and I put my Leupold VX6-HD 4x24 power scope on him. The scope rested on a Hart .300 Ultra Mag rifle that I had borrowed from a good friend of mine.

After looking at the ram up close in my scope, I tapped Ron on the shoulder with a set of hearing protection and said, “Here, put these on. I am going to shoot this ram!”

He said, “Okay, I guess this is going down!”

Ron quickly put on the hearing protection and pulled out his iPhone to capture a short video clip of the shot. The ram was hit good and disappeared around a rock cliff. He went about 30 yards before piling up in a big rockslide. We called Kevin and Dakota on the radio and told them we had found the ram I had just shot. After plenty of hugs and high fives, we started the process of caping, cutting, and packing. Fortunately, the pack out was not too far from where the quads were parked.

With a bad knee that ended up requiring surgery in December, I was thankful we were able to find the ram on the first day. It was so awesome to be able to share this experience with my son and good friends, and I appreciate all their help. I am hoping one of them will draw this tag in the future so I can be a part of helping them make their memories and experiencing the feeling of hitting the lottery.