Planning, Trading, and a Lot of Luck 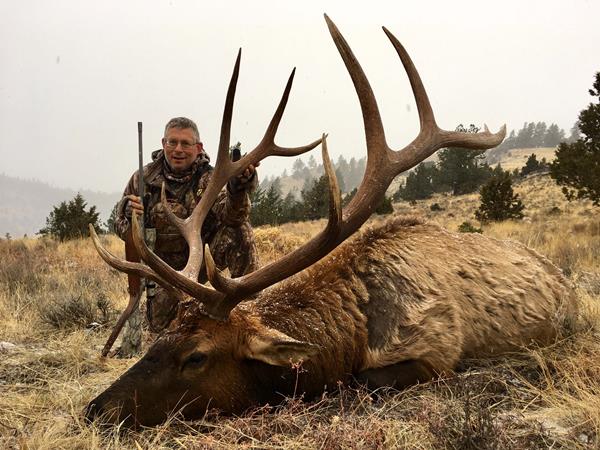 Over 20 years ago, I started putting in for points in Oregon. Going into 2017, I had 20 antelope points. After talking with the team at Huntin’ Fool, I was pointed to Taylor Albertson. Taylor and I discussed the points I had, the units I had been trying to draw, and his knowledge of the local area. We opted to hunt the North Warner unit. With the points I had accumulated, I would draw the tag. My goal was to take a goat in the 80-point range, and Taylor thought it was doable. I chose to go with a guide since I live seven hours from the area in which we camped and hunted.

I showed up the day before the opener, and we spent some time looking over a couple areas where archery hunters had seen an 80"+ goat. Not seeing the goat, we made the two-hour dirt road drive to where Taylor had done most of his scouting. We headed out in the dark on opening morning and got a little elevation on a small lake. There were hundreds of antelope around the lake and surrounding hills. We glassed for over an hour without seeing any bucks worth stalking, so we decided to move to the other side of the lake. We spotted a couple of decent bucks but nothing we were interested in stalking.

As we looked back across the lake, Taylor spotted a buck 400 yards above where we had originally glassed. It looked pretty good in the spotting scope. We headed back across the lake, parked, and started hiking. We found the buck near the top of the hill but could never get in a position to see him clearly or get a shot. As we worked downwind and then up through the cover, we lost sight of the buck. We found him again about 500 yards out with a group of does, but he was moving and I could not line up a comfortable shot. Over the next three hours, we watched the buck slowly move towards another small lake and then disappear behind a ridge. We decided to go back to camp and then go back into the area from a different direction.

Around 1 p.m., we drove close to the front side of the ridge the buck had disappeared behind and headed out on foot. Once we were on top of the ridge, we spotted antelope about two miles away. We had plenty of cover and geography to get close, so we headed towards the antelope. We slowly crested the hill but found no animals. Over 100 antelope had disappeared. We thought there had to be a way for them to move without being seen.

After a frustrating hour, we caught sight of a couple goats feeding half a mile away in a bowl. We dropped down the hill to the lake and went up the far ridge. As we crawled to the top, we started seeing antelope all over in front of us. Due to the brush, rocks, and trying to stay concealed, it took another hour to find the buck from that morning. The only shot I could manage was going to have to be in a standing position, and the goat was over 300 yards away. Finding a large brush pile, I worked up behind it, set up my tripod with a gun cradle, stood up, dropped the gun in place, and found the buck in a small hole through the brush. I squeezed off a shot, and the buck dropped. He had prongs that were almost six inches long and really good mass.

Trading was also part of my Oregon adventure. A friend and I own a hunting business (Just For Hunting) in Redding, California. I have access to Private Land Management tags, and one of our leases is an amazing property with blacktail deer, bear, elk, turkey, and hogs. We had sold our one elk PLM tag to a hunter (Chris) from Michigan who also owned a ranch in Oregon. He ended up taking a 390"+ bull on our property. He had never taken a blacktail and was willing to trade my trophy blacktail tag for an elk on his Oregon ranch. That seemed like a heck of a deal for me. Chris came to the ranch in August, and on the last day of his hunt, he took the largest blacktail we have ever taken on the ranch. I was happy for him, and we celebrated a great hunt and deer.

In November, I headed to Chris’ ranch. The hunting was from blinds and ridgetops where the elk frequently traveled between feeding areas. On the first morning, I was in a blind over a small valley with my guide, Nic Jones, and his dad, Shawn. There was a group of about 40 elk in the meadow at the bottom of the valley about 350 to 400 yards from our blind. There were a couple nice bulls, but it was not light enough to see clearly through my scope. The animals were moving, and I opted not to shoot.

We went back to the lodge at lunch, discussed where we wanted to hunt that evening, and looked at pictures from trail cams.

All of a sudden, my guide’s dad got excited and exclaimed, “He’s back. It’s the Keyes Creek Bull!”

Moving over to look at the pictures, I saw what appeared to be a bull with very long fours and fives and good mass. It was clearly better than any bull we had seen that morning. The trail cam picture of the bull had him moving across a ridge close to the top of the highest peak on the ranch and feeding in a meadow on the ridge. There was a blind on the ridge about 350 to 400 yards from the meadow. The bull came into the meadow at dark and left in the dark. We decided to go up to the blind at around three, stay until dark, spend the night, and hope to catch him either right before dark or at first light.

The bull never came in that first evening, and once it was dark, we each got set up in our sleeping bags for the night. I woke up at 4:30 a.m. It was a full moon that night, and we could see a couple bull elk in the meadow below. As the morning progressed, one of the bulls dropped off the meadow and into the dark forest to the right. At about 6 a.m., another one moved down off the meadow into the timber to the left. Not much happened for another hour, and then a third bull appeared at the far end of the meadow and moved up the hill towards us. My tripod was set up, the rifle cradle was attached, and I sat behind it, following the bull in my crosshairs. It was a young bull. I had no plan to shoot since I knew there was a better bull in the area.

We sat for another hour and a half, but there was no activity. The bull had done what he had done the day before, coming in after dark and leaving before light. Figuring he would return again that evening, we decided to go back to camp, grab some food, and repeat the same activities that afternoon. Nic decided to hike down to the truck and then drive back and get me. After he left, I put most of my gear away. I stood up, put my binoculars to my eyes, and a bull walked out of the trees and into my field of vision. It had big backs. I dropped to the ground, and as I lay there, I reloaded my gun and attached the cradle. I stood up, put the gun in the cradle, and found the bull in the scope. I moved the crosshairs in front of the bull, he walked into them, and I squeezed the trigger. The bull jumped and disappeared behind the only juniper on the top of the ridge. The shot had been 340 yards, and I was not sure of my results. I decided not to move until Nic returned.

About 10 minutes later, I heard Nic moving below. I ran down and told him the bull was down. We headed down the hill, and as we neared the juniper, Nic yelled, “He’s down!” As I came around the tree, I was stunned. The bull was piled up and not moving. I had taken him at the top of the heart. There was no ground shrinkage. The bull was a lot larger than he had looked on the trail cam pictures. I was ecstatic, and as it turned out, this was the largest bull ever taken on the ranch. Planning, trading, and a lot of luck led to my best year ever in Oregon!