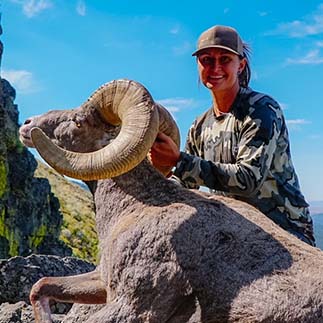 I drew a bighorn sheep tag, the tag-of-a-lifetime! I was born and raised in Lakeview, Oregon and was lucky enough to draw a bighorn sheep tag in the Warner unit, which lies in my backyard. At 35, I am an avid bowhunter and enjoy all things outdoors. When I discovered I drew the coveted tag, my first phone call was to my dad, my hero and forever hunting buddy. The other was to my best friend since childhood, Logan Sheridan, another born and raised local to the area and avid hunter.

The same day I found out I drew the tag was the first day scouting began, and the very first evening, we started seeing sheep. For two months, every spare second, weekend, after work, and days off were spent glassing for sheep. We put up game cameras and worked with local ranchers and hunters. The support from the local community was outstanding.

Logan and I worked awfully hard finding all the rams we could before the season opener, and we ended up seeing around 25 rams and having about four rams that I was interested in hunting. One ram caught my eye. We named him “Clyde the Glide” as he and six other rams were living below a hang-gliding launch. He was special in every way that I was hoping for in a ram to take. I was looking for a lot of character, and he had it.

I did not know much about bighorn sheep or how to hunt them because it’s not every year you draw a sheep tag. I had to do a lot of learning in a short amount of time. Logan had been on several sheep hunts and knew the unit well, so along with unending questions about all things sheep, he showed me the way to scout them. The season opener was approaching fast, and I put together the best crew I could think of to help me hunt this bighorn ram that was so special. It would not be until after I had him on the ground that we realized how special this big ram really was.

Opening morning, my crew and I were on the launch before daylight waiting to glass up Clyde and decide on how to hunt him. The sun rose, and he was in the same area he had been for the last two months. It was go-time. Logan, my dad, and I would be the ones to make the play on him. Everyone else would watch from the launch and let us know if he changed locations, which he did. He moved his bachelor group into the next saddle north of us, going out of sight from the crew. Our good friend, Lex Romine, jumped into his pickup and drove about an hour down below the rim to get eyes on them. He picked the group up quickly and walked us right on top of them.

Logan set me up on a good rest with my rifle and ranged Clyde at about 300 yards but at a very steep angle below us. My dad, Harvey, kept eyes on him as I steadied myself and waited for the ram to give me a good shot. A few minutes passed, and the ram gave me every opportunity to pull the trigger, but I could not quit shaking. He tucked himself up against the rim where I could not see him anymore. My heart sank, and I thought I had lost the best chance to take the ram of my dreams. Logan and my dad assured me we would have another chance at him and to take a deep breath.

What seemed like hours was only minutes until the next opportunity came. Logan had walked around to see if he could get a look at Clyde from a different angle, and Dad was still glassing some smaller rams below, still in sight. I was sitting alone, looking down at the space where Clyde had disappeared. Suddenly, he stepped out and I had a 250-yard perfect shot behind the shoulders.

I looked up at my dad and whispered, “He’s out.”

He responded with, “Are you going to shoot him?”

I shook my head yes, took a deep breath, let my crosshairs fall right behind his shoulders, and pulled the trigger. Clyde fell immediately from my sight. I knew my shot was true.

Logan came running from around the corner where he had left me for two minutes and heard the shot. He ran over and started glassing for the ram. I kept saying, “I think I got him!” and Logan found the ram upside down in a rockslide I had shot him in.

“You have a dead ram!” Logan said.

I will never forget the rush of all the emotions leading up to the moment. Like your typical girl, I started crying and hugged my dad. We had successfully taken the ram I had loved since the first time I saw him back in June. My once-in-a-lifetime hunt was over.

Getting down to Clyde the Glide proved to be a long and difficult task. The face of Abert Rim is steep, and loose sliding rock is everywhere. My dad and I made it to the ram while Logan waited to bring the rest of the crew in to help bring the animal out. As I approached Clyde, he was even more awesome than I had ever imagined and bigger! I started examining his horns and noticed a big chunk taken out and what looked like bullet shrapnel stuck inside the hole.

After getting my trophy ram quartered up and packed up the mountain, which was no easy task, we made a few phone calls to the local biologist. It turned out the previous year that one of the tag holders also had scouted and chosen Clyde as their pick to hunt. They made a poor shot and shot him in the horn from 800 yards, knocking the ram down. They ended not being able to find him and assuming he had died later from the wound. They underestimated the great ram, and he survived another year. How many bighorn sheep rams are taken that have bullet shrapnel still in the horn from being in a gunfight? This was truly an incredible animal, and at 9.5 years old, he had ensured his genes would live on for years to come.

Of course, drawing a bighorn sheep tag is an incredible task, but doing all the work with no guide, just my best friend and me, was something special. Being able to harvest my trophy opening morning with all my closest friends and family there was the best part of the entire process. Clyde the Glide will forever bring back unforgettable hunting memories every time I look at him so proudly on the wall. I’m one lucky girl in so many ways.

Logan, Dad, Garrett, Charlie, Brooks, Jim, Lex, JR, Keeley, Uncle Jack, and Jacey – thank you will never be enough to express how grateful I am you were all there to experience this amazing day.