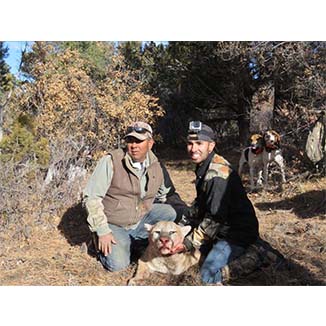 I did it! Thanks to all the individuals who stood behind me and gave me a helping hand up rather than telling me I couldn't do this or that, my father included! I am different. I am not one to whine and cry over things that might be tough for me to do but are not impossible. I am a very driven individual. Limitations are what you make of them.

I called a good friend of mine who has dogs, mentioning I was off that weekend and we should go chase a cat. My friend said,"Yeah, let's go!"

I woke up at 2 a.m., raring to go. It was 19 degrees here, and down southwest three hours it had to be approaching negative temperatures. I went to Walmart before I left town since they were the only ones open to grab some things for the day's adventure. My father and I hit the highway ready to go!

I was starting my fourth year of hunting lions and was feeling kind of skeptical because of the extremely warm weather the last week. We arrived a little before 6 a.m., and there were two of us with lion tags, Taylor and me. I had been trying to get a cat for four years. Many of you may know or have seen some of my stories. I have been battling MS for five years since this last October. I am as stubborn as they come! The only time I quit doing something I respect and love, I have to quit breathing to give it up.

The seven of us split up between two trucks and headed our separate ways. We were about two miles apart as the crow flies with all the nooks and canyons in between us. The snow was all gone except on the north slopes, otherwise it was mud and dirt. This was going to be tough! However, I can't harvest anything sitting on the couch, so I had to try. We headed down the main road, letting one of Thad’s dogs run in front of the truck. We were hoping to key off on something, but there was nothing except a bobcat track and some old lion tracks.

We headed back down to the main road to head up and try a new road. We had gone more than 100 yards after hitting the main road when we saw Preston coming down the road flashing his lights. I was thinking to myself that this was a good sign. We pulled up to him, and he said to follow him. That was promising. We arrived at the spot where Taylor and Jerry were standing, seeing them looking over the ledge. By now it was about 7:30 a.m. It was still pretty brisk but heating up. I told myself that this was a nasty looking hole full of ledges and little nooks. Lions don’t live in easy country. After all, they are “The Rocky Mountains Most Elite Predator Out West.”

I got out and started looking at the track. It was nothing special. It was about the size of a small chew can. I mention this because it was kind of small for all the excitement.

My dad said, "Yeah, right. This thing is bigger than Dallas!"

He was standing behind me about 20 feet. I started to smile and walked over. This thing was huge! It was about the size of large can of chicken. My heart started to pound, and thoughts started running through my head. We assumed that little cat was a female he was following. They crossed the road sometime early in the morning. Granted, the road had been traveled by traffic since then, but the fresh layer of frost from the morning showed their tracks on top of it. Those dogs must have been able to smell them because they started going nuts. We started collaring up the dogs with GPS collars and lead collars. Taking two of the best dogs over to the track to start them off, we let them go. Let's just say, let the race begin! We let the other three dogs go to follow the lead dogs. We were all standing on the edge, watching them. Those dogs could fly up that hill on the other side. Those dogs kind of reminded me of me. When you have a passion, why stop even if that means charging in head first after a giant? Once they were out of sight, we started watching on the GPS. They hadn’t been gone for more than 15 minutes and they were already two miles away. They cut north away from the canyon. That was good because Ty said there was a road up there. Ty and Preston started cutting across the canyon. Those boys could move.

We hit the road, and the GPS was saying the dogs were in front of us and to the left. We went up to the road and started listening for the dogs. We started to shed jackets, not getting too anxious to start covering ground yet. The dogs were still moving around but in a 20-yard square. Finally, the GPS said the cat was treed. We drove up the road a bit, got out, and grabbed cameras, water, and sunglasses. The dogs were about one mile down the hill. Taylor, Jerry, and Preston’s daughter took off to get down there in front of me. That was totally fine with me as I walk slow but steady. I got close enough that I could hear people talking. Of course the dogs were going nuts. I got there, and everybody cheered because I had made it. I looked up in the biggest ponderosa around and saw the cat. What a stud! A thought ran across me about the tremendous amount of effort I put in to come to the final moment. I went into a serious focus kind of stage. After all, I was going to harvest this stud with my pistol, a .357 mag which I called “Matilda.” The cat was almost at the very top of that giant ponderosa. He was about 25 yards away, and the cameras were out. I yelled at the guys to ask if they were ready. I took a deep breath and touched off the trigger. I did it! A feeling came over me as four years of persistence had finally paid of. It just goes to show you that anything can be accomplished if you put in persistence and hard work, no matter how many times you come up short. We all only have one life. Live your life with something worth talking about because your legacy lives on!