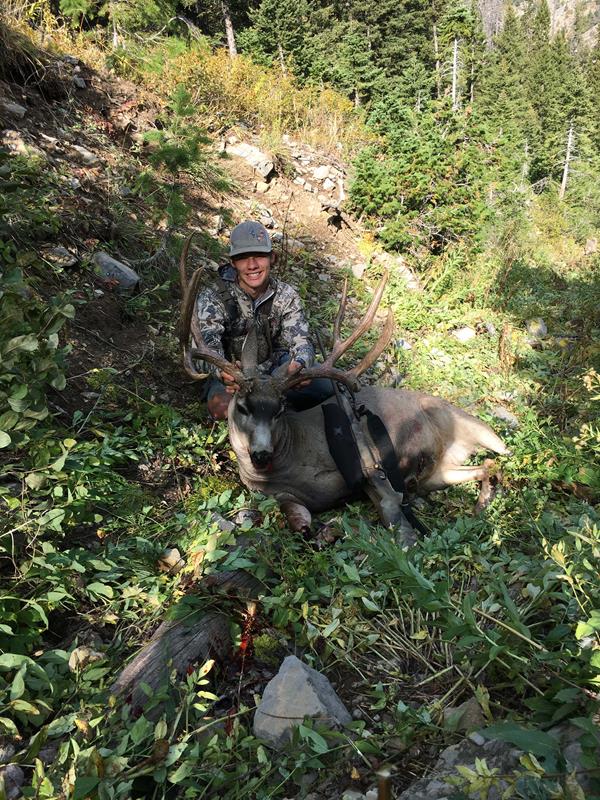 It was a very warm morning on September 14, 2020, the day before the opener. It was a day I had been eagerly looking forward to after having a very successful summer of scouting, and it was finally here. One of my best buddies, Jory, and I had put in a lot of work during the summer with a goal of trying to locate a big shooter buck, and we had done a good job of finding one. The biggest obstacle we were going to have to conquer was trying to turn up the big buck the day before the opening day of rifle season.

Jory, Owen, a buddy of ours, and I hit the trail about mid- morning with our packs and camps loaded on our pack horses with the intent of finding the big buck. We worked our way up the very deep canyon. We would be dropped off at the base of a ridge that we planned on hunting from. We reached the point where we took off on foot, and as we got close to the top, we decided to take a decent-sized break since we were making good time. With an opening in the trees, we could see some of the smaller basins that were neighboring the big basin we wanted to hunt. Wanting to make use of our break, we started glassing with no intent of seeing anything because we hadn’t seen much there all summer. Right away, Jory spotted four does, but with it only being September, we didn’t expect any bucks to be close by. However, after checking on those does about 10 minutes later, Jory found a pretty good buck. It wasn’t the big one we were after, but it was a buck that would be worth keeping an eye on.

I had checked a little basin that didn’t have any deer a couple times but forgot about it while watching the good buck and does feed. We were about to throw our packs back on and finish our death hike when I decided I would take one last look at the little basin that didn’t have any deer in it. To my surprise, I spotted a really big-bodied deer with what looked to be a big set of antlers. It looked to be the big buck we were after, but I couldn’t confirm it. My chest filled with excitement, and I had Jory get the spotter on it. The first words that came out of his mouth were, “Oh my gosh! Look at the fronts on that thing!” I knew right away that we had found the big one.

After watching the buck for about half an hour, we decided we needed to get to the top of the ridge so we could see if we could locate a different buck for Jory. As we came up to the rim of the basin, we sat down and started glassing. Right away, I found a few young bucks with a really good buck that may have been worth taking if he was mature enough. We find it really important to give our good looking 4-year-old bucks a chance to hit that 5-year-old age class so they have the chance to become giants themselves. However, giving these bucks a chance wasn’t going to be enough because we had seen about 10-12 other people around the basin. That put a sick feeling into my stomach knowing that a lot of these bucks were likely going to be found and killed with this much pressure. We even looked up at our summer scouting perch and saw three guys sitting there with a spotter pointed at the little basin the giant was in. It was then that I knew we weren’t the only guys that were going to be after that buck at first light the next day.

After going in and out of sleep throughout the night, my alarm finally broke the silence at 5:15 in the morning. I was already awake and turned it off just as fast as it started. I was ready.

We had made the plan that Jory was going to go and sit where we had seen the buck the prior evening, Owen would sit in the big basin and see if he could find any mature bucks for Jory to shoot, and I would be set up before shooting light on the small basin we had seen the big one in. As we split up, I took a look at the basin and saw little lights surrounding it. I could pick out a group of three headlights working their way around the basin, trying to get to the small one. It was a gut-wrenching feeling knowing that I was going to have some competition, but I was ready. I had put a lot of hard work into this, and it was going to pay off.

As light barely started to come over the horizon, I worked the basin over and over very diligently, trying to find the big buck before anyone else did. After about an hour of glassing, I got a very bad feeling when I could not find the buck. I texted Jory a couple times and he wasn’t seeing much either. Not even five minutes later, he called me and said there was a big buck bedded in the basin that we had seen the does in, but he couldn’t tell how big it was because Owen had his spotter over at the big basin. I started panicking because from where I was set up, I could not see the basin that Jory had spotted the buck in. I started to gather my stuff when Jory called again and told me that he got the spotter on it and that it was the big one. Now I will forever be in debt to Jory because he did something that most guys would never do. He knew how bad I wanted this buck and how big of a dream it was to me to take a buck of that caliber. He told me he’d wait and watch the buck until I got there so I could take a shot at him. Before I took off, I told Jory that if that buck was about to disappear in the timber to go ahead and shoot him because you don’t want a buck that big to walk away.

I gathered my stuff, threw my pack on my shoulders, and took off towards Jory and Owen, hoping that I wouldn’t hear a gunshot from where Jory was. About halfway there, a gunshot echoed through the canyon and broke the silence of opening day. My heart dropped. Had Jory taken a shot? My phone rang about 30 seconds after. I answered, and Jory said he took the shot before the buck disappeared. However, he said Owen was watching in the spotter and it looked like the shot missed. I told him to keep watching for the buck and that I was almost there. I continued my short hike to where Jory was set up and my phone rang again. This time, Jory told me the buck was back in the basin. My first thought was, “No way in the world was that buck back out after being shot at,” but from where I was at, I had a good view of the basin. I pulled out my binos, and sure enough, there he was. I was blown away. I was still on the phone with Jory but could not find where he was. However, I knew I had to be close. Jory told me to look to my right and there they were. I took off jogging across the sidehill so that I could get a shot at the buck. Along the way, a stick caught my pants and ripped a hole in the knee, making me eat the dirt. Ouch! With Jory and Owen both looking at me, smirking, I hurried back up and got to where they had been laying behind a log. I got set up with my rifle sitting on the log and got the range of the buck. I dialed my scope for the shot. The buck was about to step behind some trees, so I knew I had to take a shot. With Owen behind the spotter watching and Jory behind his gun ready to shoot too, I took one deep breath and touched one off. The rest is history.