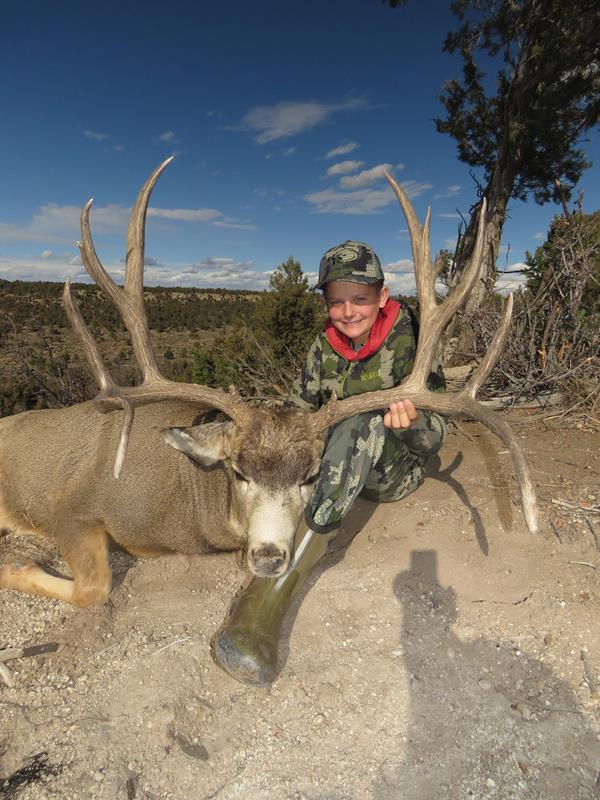 It all started when my dad came home with a gigantic smile on his face. When I asked him what he was so happy about, he told me that I had drawn a really good deer tag in New Mexico. The more my dad talked about the tag, the more excited I became. Our family hunts a lot every year, but up until now, I had only ever killed a couple turkeys and a bunch of rabbits. Last year, I got to watch my older brother, Brogun, shoot his first buck in our home state of Utah. While that was pretty dang awesome, I was even more excited to have a tag of my own this year!
We were going to be hunting with Ryan Nogosek. He runs A3 New Mexico, and after talking to him about my tag, I think he was more jacked than we were. Ryan is really cool, and before too long, he had us talking to Dylan Ehrlich, who would be our main guide. From the first time we talked to Dylan, it was easy to see this was going to be a lot of fun.

As the year rolled along, my dad and I went to the rifle range a bunch. I was feeling really confident in my shooting. I have the coolest gun ever. It’s a 6.5 PRC that one of my dad’s friends, Steve Monk, built for me. Steve owns a gun company called Affordable Long Range, and they build some awesome guns.

Before I knew it, it was time to head to New Mexico. We were going down a couple days early to scout. Our plan was to hunt for the first few days with Dylan and then if we hadn’t killed, my mom and my brother would come down just before Thanksgiving so we could all hunt together. After the truck was loaded, we gave Brogun some knuckles and my mom a big, wet kiss, a giant squeeze, and then we hit the road. All year long, my dad had been talking to me about the type of buck we should be hunting. He told me we would be going after older age class bucks. I wasn’t that excited when he kept saying that the size of the antlers didn’t mean as much as finding and hunting an older aged deer, but I understood what he meant and just wanted to have a fun hunt with my dad.
Just about the time we hit Page, Arizona, a text came to my dad’s phone. It was from Dylan. There was a trail camera photo of a buck and the words, “Will this one do?” The buck was at the very back of the photo and kind of hard to see, but we could tell he was awesome. My dad and I were excited that he was in the area we would be hunting. We didn’t know at the time, but that buck was a local legend and one Dylan had been watching for the last few years. Since he wasn’t at the front of the photo, Dylan didn’t recognize him as the buck he called “Booger Hook,” but later, we would find out it was him. Another reason he didn’t think it was Booger Hook was because he had seen the buck in 2017 and 2018 but not in 2019. He said he spent a ton of time looking for Booger Hook in 2019, and when he didn’t show up, he just assumed the buck had either been shot or killed by a lion.

After arriving in New Mexico, we soon got to meet Dylan. My dad and I followed him out to the spot where he had gotten the trail camera photo of the big buck. He showed us where to hike up to a good knob so we could glass. Dylan then went to another spot and told us to meet back up with him around lunchtime. We saw a lot of deer, and it was fun glassing, hiking, and getting to know the area. We saw a couple bucks that I wanted to shoot the next day. One was a gigantic 2-point. He was old, had a big head, and his shoulder blades poked up. He had some does with him, and my dad said he shouldn’t be too far the next day. Dylan found another awesome buck with does as well. The buck Dylan found was a 5x5 with matching cheaters sticking out each side. His horns were dark, and he had big forks and a really white face. With all the good bucks we saw, I just knew I was going to kill a nice one.

As we made our way out the next morning, we saw a lot more people driving the dirt roads in the dark than the day before. We eventually got to our spot and began our hike. The plan was for Dylan to go where my dad and I had been the day before because it was a good glassing spot and my dad and I were going to work down a long ridge and by mid-morning end up above the pond where Dylan had taken the trail camera photo of the big buck.
We hiked to a good spot where we could see a little hidden pocket of bitterbrush and sage. After spending a couple cold hours watching nothing more than a couple does, we decided to pick up and slowly make our way to the knob above the pond. We went slow, noticing where the tracks and beds were and where they weren’t. Eventually, we made it to a really good spot where we could see the pond. We were planning on staying there for the day. My gun was close to me but not set up for quick action.

I was glassing the pond with my binos while my dad was about 40 yards away, looking into another side canyon. After about 15 minutes, I saw three does and what looked like a huge buck coming down to the pond. I remember looking over at my dad and saying, “Dad! There’s a huge buck down at the pond!” I couldn’t believe what happened next.

As my dad was helping me get into shooting position, the buck suddenly looked up the hill in our direction. I remember hearing my dad say, “Buddy, if he’ll just stand there for a little bit longer, you’re gonna kill that giant.”
Just as I was getting to where I could see the buck in the scope, he suddenly whirled and took off. He had had enough of the commotion, and we were both sick that we may have just blown it. My dad got a hold of Dylan and told him that we had just seen a huge buck with giant floating beams. As my dad described the buck, Dylan said, “Dude! I know that buck. It’s gotta be Booger Hook.”

Before my dad went back to his glassing spot, he told me to keep an eye on the pond as the does hadn’t had a chance to drink and they might come back, bringing the big buck with them. I was glassing all around the pond and the last place we had seen the buck when all of a sudden, my dad was right by me. He had snuck away from his spot and whispered, “I found him, buddy!” He pointed in the direction where the buck was standing, and I could see him there. He was straight across a big canyon and looking right at us.

We quickly adjusted the gun in the right direction, and I began scanning the tree line, trying to find the buck in the scope. With my dad’s help, I was finally able to see the giant buck. He had been there a while, and we were worried he could bolt at any time. My dad ranged him at 447 yards, turned the turret to where it needed to be, and then asked, “Are you steady?”

With the help of the TriClawps, I was pretty dang steady, and my dad was so happy when I said, “Oh, he’s dead!”
With no time to grab the spotter and Phone Skope, my dad said, “Take a deep breath, hold it, and just squee...” Boom! I had taken a good deep breath, and I felt rock solid steady. Just as my dad was telling me to squeeze, I touched the trigger. The buck dropped instantly. I had killed him!

With the buck down for good, I called my mom and brother to tell them the news. My mom was so happy for me that she was crying. We walked over to the buck and it was only then that we realized it was indeed the famous Booger Hook. My very first buck was a local legend!

This was a fun hunt with my dad. I’m so grateful I got to kill something, and I’m even more grateful that I killed a giant.