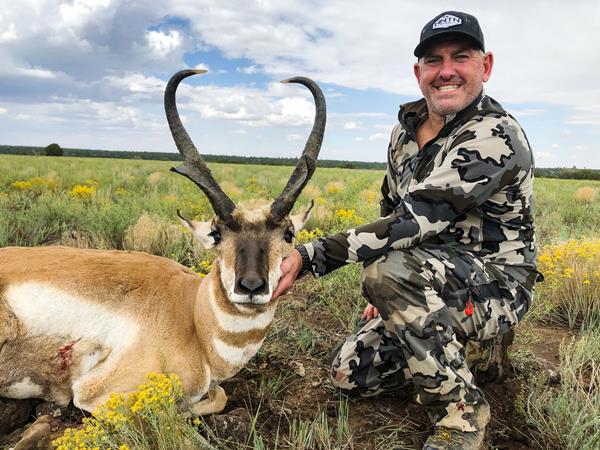 Yep, I’m that guy! It took me 7 points to draw Arizona unit 10 in 2013 for antelope and 8 points to draw the only out-of-state Arizona 5B antelope tag this year. My wife said she never wants to hear once-in-a-lifetime again! Knowing how lucky and special this tag was, I wanted to take full advantage and decided to use a guide. My good friend and hunting buddy, Mike Curtis, and I go on self-guided hunts all the time, so this would be a first for a guide. I eventually picked High Point Outfitters, with Ben Sandall being my guide. He began sending videos of good bucks he had found, and we ended up with numerous bucks to choose from. Ben; Jacob, my son; Mike; Ryan Delashmutt, my brother-in-law; and Rob, Ben’s father-in-law, all helped glass for antelope.

We arrived from Washington state several days before the hunt, met Ben and Rob, and got out looking at the bucks. I was initially going after the “Ivory Tip” buck but ended up deciding on the “Fence Line” buck. He had more mass, and the antlers were pointing forward, making for a unique look. Ivory Tip was a beautiful heart-shaped buck with a couple inches of white tip on each antler. Both were beautiful but very different.

The night before the hunt, we split up. Mike and my son, Jake, ended up finding the Fence Line buck and bedded him at a completely different location. Ryan and Rob looked for the Ivory Tip buck but couldn’t find him due to the torrential downpour. However, they did find another nice buck. Ben and I looked for the “Crooked Horn” buck, but we couldn’t find him. While we were looking, a storm cell formed right next to us. It was sunny on the left, dark clouds were on the right, and we were right on the edge. As we were driving, I had my arm out the window. All of a sudden, there was a tremendous bang! I yanked my arm in and jumped to the roof. I thought somebody was shooting at us from close range. but it was a lightning bolt that had struck the ground at a 45-degree angle to us no more than 50 feet away. We saw the bolt strike the ground and felt the heat on our faces (and my arm) and the electricity. It also sent up a plume of smoke from the ground. That’s all Ben and I talked about for the next half hour. We couldn’t believe we had just witnessed it that close. We were thankful it didn’t strike the car. Mike, Jake, Ryan, and Rob all saw the lightning bolt, but they were miles away and had no idea how close we were.

Opening day came, and let’s just say this, we won’t go into much detail. We set up early with Mike and Jake going to the last known location of the Fence Line buck and Rob and Ryan going to a bush that had a great view of where the buck had been bedding down repeatedly at the fence line. At sunrise, he wasn’t there. Ben and I got up early and beat a truck with three hunters in. They had decided to basically drive past Ben’s vehicle right behind us and leave their bright lights on. They were shining their light through the meadow for several minutes. Really mature! We set up as best we could in the dark, and as light came up, we were basically 100 yards from two does and a tiny buck that eventually saw us in the open.

We were somewhat busted and had to belly crawl for a ways to where we were just off the mark of where the buck was. After a bit, someone shot at the Fence Line buck. We got up and started walking toward the sound, thinking we had missed our opportunity. Suddenly, the buck ran right into us. They had missed. To make this story short, I also missed and everyone was chasing this buck. After a while, another group shot him.

Ben had to run into town to get his father in-law’s gun for me due to some issues that happened during the hunt. After talking with everyone back at camp, I decided to go after the Ivory Tip buck, if he was even still alive. We knew from the past couple days that there were several cars parked in the area. Rob and Ryan had found another good buck the previous day, so we knew we had some choices. After Ben got back, I told him that I wanted to go after the Ivory Tip buck. We both hoped it was still there.

Rob had to leave, so Ben had Mike and Ryan go to a knob to do some glassing in a different but general area of the buck while Ben, Jake, and I went to look for the buck at the original spot. There was a car at the first entrance we wanted to take, so Ben decided to take another road to the opposite side of the area. It had rained, so we had “the gumbo,” ruts and a lot of rocks. Not one car or track was there, which was a good sign! We got our stuff together and started hiking out to hunt.

We had all talked about the low odds of the Ivory Tip buck still being alive. We hadn’t gone more than half a mile when Jake said, “There’s a goat.” Ben had us go into the junipers, and we started walking and glassing. Soon, there were antelope walking up and over a rim in the distance. We could see a lot of antelope coming and going as we kept walking. Jake and I were whispering to Ben, “Buck there, buck over there, a new buck there.” He was quickly scanning back and forth with his Swarovski BTX, looking at bucks. Finally, after looking at one of the bucks, he said, “You’re not going to believe it. That’s the Ivory Tip buck.” We could NOT believe it! We were in a great spot. The Ivory Tip buck was chasing off a smaller buck, coming from right to left. We were coming out of the juniper trees perpendicular to the buck. All that was between us was a small rise and a bigger bush in the distance. When it was safe, we ran in single file straight forward, stopping frequently to see where the buck was. Eventually, the buck was behind the big bush, so we ran forward. The Ivory Tip buck eventually ran off the smaller buck, turned around, and started walking back where it came from. We had made it to 235 yards but couldn’t get any closer. Ben set his backpack down so I could place the gun on the frame. I sat down and eventually got the goat in my scope. Heart pounding, it was go time!

The goat eventually stopped broadside and was looking our way. I slowly squeezed the trigger. Jake said, “I think he jerked.” Ben saw that but wasn’t sure if I’d hit him or he jumped because of the sound. The buck walked about 20 yards and stopped. Ben was telling me to get ready to shoot again. Then, the buck started the wobble legs. He was down! I think we were all in shock that it happened that quickly and he was still alive. There was a lot of hugging.
After walking to the buck, we saw that I had made a great shot and he was beautiful. We got on the radio and told Mike and Ryan that we had taken the Ivory Tip buck. They had actually watched the entire hunt. They saw us hunched over going after the buck, saw the buck drop, and heard the quiet “poof” sound seconds after the buck dropped. As we waited for Mike and Ryan to arrive, we talked about what had happened and took a lot of pictures. Co-owner of High Point Outfitters, John Adams, eventually showed up. He was going to help us out glassing, but instead, he took a lot more pictures and helped quarter up the antelope.

Thank you to Ben and High Point Outfitters for finding the goats, getting us into the right spot, and their hard work and help. Thank you John, Jacob, Mike, Ryan, and Rob for your time and help. I’m glad you were able to be there. And finally, thank you, Jennifer. You only have to wait seven or eight more years for my next once-in-a-lifetime hunt!