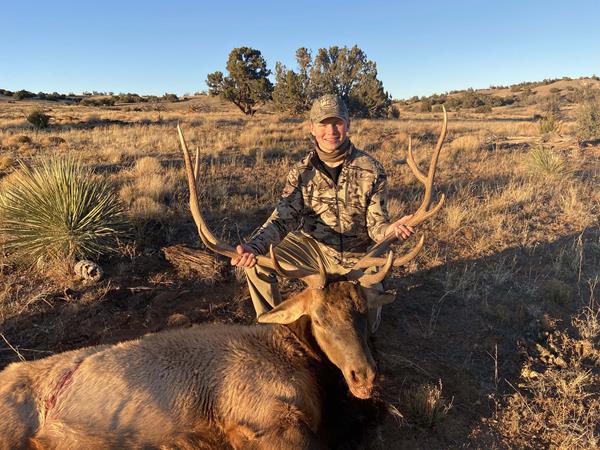 “Friday Night Lights” are very special in Texas. My son, Arthur, was looking forward to his senior year of varsity football, and when the Arizona draw results were announced, Arthur had a late season elk tag. He was super excited, but with a Friday, November 26th opener, he quickly realized a football playoff run may jeopardize his ability to go on the hunt.

The football season was a huge success. His team won their district championship with a thrilling come-from-behind victory in the final regular season game. In addition, Arthur was recognized with “All-District” honors. Friday, November 12th would be the first round of the playoffs. There was a sense of excitement about being in the playoffs but an unspoken, yet obvious sense of nervousness about the possible impact on his potentially once-in-a-lifetime elk hunt.

The playoff game did not go well as his team lost. As he hugged his mother on the field after his final high school football game, through visible tears, he looked at me and with a quivering lip stated, “Well, at least I get to go on my elk hunt.”

After a 17-hour drive, we arrived in Arizona midday on Thursday, November 25th, the day before the Friday opener. After a Thanksgiving lunch at McDonalds, we checked into our hotel. A short time later, A3’s Eric Fish, Arthur’s guide, picked us up to go do a little afternoon scouting. We had hunted with Eric in a different unit three years ago when Arthur took a spike bull with his muzzleloader. Immediately after drawing this tag, we secured Eric’s services again.
Eric had been seeing a nice bull hit a couple of different water tanks over the last week. That afternoon, we set up on a ridge overlooking much of the area where he had been seeing the bull. As we glassed, we saw a few elk but not the one we were looking for. Then, with just minutes of light left, Eric stated calmly, “There’s your bull.” Our bull and a group of other bulls were slowly making their way through some cedar trees about a mile to our south. We knew he’d be in the area in the morning.

As dawn broke on Friday morning, we were positioned on a knoll with a great view. After just a few minutes, Eric spotted elk about a mile to our southwest, half a mile west of last evening’s location. In total, there were nine bulls. Some old, big bulls were in the group, but almost all of them were sporting severely broken racks. The bull we were after was one of the only “clean” ones. We watched them enter a thick area of cedar trees, thinking they might bed. As we discussed a game plan for how to get on him, the herd appeared on the opposite side of the trees. They had not bedded. They continued to feed across a large open area and headed north.

Eric pointed out another area where they might be headed, and we made a plan to head them off. Eric would remain eyes in the sky as Arthur and I quickly moved west to intercept the bulls. After walking about a mile, we knew we were close. A small bull appeared in front of us at about 500 yards, and we knew he was the lead bull. Just to the south, a bigger bull appeared through the cedars about 600 yards away. Arthur put the scope on him, but the distance and the constantly moving animal prevented a shot. Arthur excitedly exclaimed, “That is the biggest elk I have ever seen through my scope!” The herd never reappeared. We assumed they had bedded right there for the day.

That afternoon, we set up about 250 yards from where the elk had entered the trees that morning. Within a few minutes, Eric spotted the bedded bulls at about 700 yards. Watching them for a couple of hours, individual bulls would get up, feed for a few minutes, and then lay back down. Their general movement appeared as if they might head east or north, rather than south where we were positioned. Eric recommended that Arthur and I try to ease our way closer to them rather than wait for them to come to us. We agreed.

We left our packs, I carried the shooting sticks, and Arthur carried his rifle. As we attempted to close the distance, a couple of range cows almost ruined our stalk. After what seemed like an eternal stare down, the range cows eventually wandered east, leaving our elk undisturbed just to the north. We continued our slow, deliberate stalk. We successfully reached a point about 350 yards from the bedded bulls, but our view was not as good as we had hoped. Just to our east was a group of cedars that, if we could get to, would be ideal.

The problem was a small open area that we would have to cross and that may put us in view of the currently unseen elk. After a brief, quiet conversation, we decided to try to make the move.

As we crossed the opening, we did not see any elk. Just as we got to our intended destination, thinking we had made it unnoticed, a glance to the north revealed nine bulls standing in the open area, staring intently at us. As Arthur threw his rifle on the shooting sticks, I ranged them at 290 yards. “Which one is our bull, Dad?” Arthur asked excitedly.

A quick scan of the bachelor group revealed our target. “He’s the one in the back turning away from us!” I whispered loudly.

“I am on him,” Arthur stated matter-of-factly. “Aim small, miss small,” I said unnecessarily.

“I need to wait for him to be clear of the other elk,” he replied. I whispered my agreement.

After just a few seconds, the lead bull had seen enough of us and began to move. Our bull took a few steps into the clear, and as Arthur’s rifle roared, the bull dropped in his tracks. Arthur had done it. His wanted bull was down on opening day! As we walked up on the bull, we paused, emotional and reflective. The setting sun revealed a beautiful scene – massive antlers lit majestically against a splendidly impressive skyline. At that moment, I could not help but think that Friday Night Lights in Arizona are very special too.