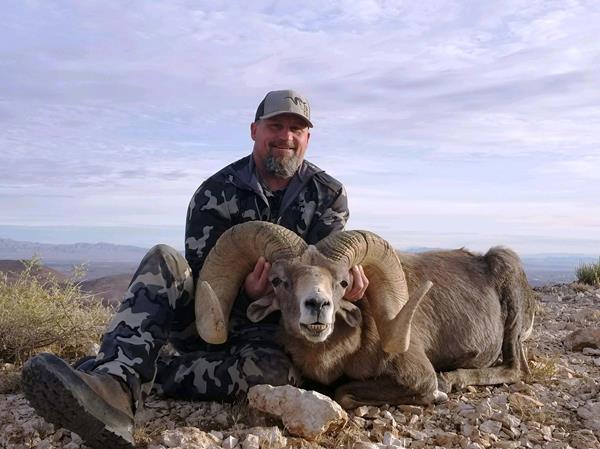 The Friday before Memorial Day weekend is an exciting time. It is a time for finalizing plans for camping and spending time with family and friends. In Nevada, it also means big game tag results are posted. Don’t get me wrong, spending time with family and friends is great, but when you have a tag in your pocket, it makes it that much better. When 2017 results were posted, it turned into an amazing weekend for me. It was my turn to hunt a Desert ram!

The first call I made was to my best friend, the person whom I have hunted with ever since I can remember, my dad. After that, calls were made to the greatest group of hunters I know, my family and friends. Plans were set into motion, and the wait started. Due to work obligations and having two girls in high school sports, I did not make a scouting trip down to my unit until October. During this trip, the wind blew us off the mountain and we never turned up a sheep. However, I did have the opportunity to talk to a great guy who knew my unit well and was more than happy to share information with me. Thanks again, Shane!

Fast forward to the morning of November 19th, the day before the opener. The last of my crew had shown up the night before, and a plan was made to split up and glass as much country as possible. My dad and I had set up to glass a ridge where we had seen a good ram the day before. As I looked to get a better spot out of the wind to set up my scope, I thought, Is this wind going to stop and will the sheep be back on this ridge this morning? Just as I was getting comfortable for a long day of glassing, I received a phone call from Justin and Deke. They had found what they thought was a good ram, but due to bad service, they had not been able to send a picture. I told them to keep trying and went back to glassing. When my phone went off again not 10 minutes later, it was the picture, and what a picture it was! After sending the picture to Juan, Heston, my cousin, Shawn, and Uncle Phil, it was decided we needed to get over there.

When I first put my scope on this ram bedded on top of the ridge, I thought he couldn’t be real. The look on everyone else’s faces as they got their first look said the same. We were looking at a giant. The next six hours were spent on that ridge watching this ram put on a show. We took video and pictures through our spotting scopes until dark. Once darkness set in, we hiked out to the trucks. After dinner back at camp, talk turned to the plan for the morning. It was decided that Dad, Juan, and I would go in while the others sat back and glassed in case the ram slipped out on us.

After a long night of tossing and turning, the time finally came to head over to the area where we had left the ram the night before. As we eased up to the area and started to glass, Juan said, “I have him.” We were about 1,200 yards away, and to say I was nervous would be a huge understatement. We worked our way to 300 yards and set up for a shot. As I lay there looking through the scope at the biggest ram I had ever seen, he stood. My crosshairs found the ram, and I sent the first shot. After a short, nervous pause, I heard the words, “He is hit.” It felt like the weight of the world had lifted. I sent the next shot, and he went down. To be able to jump up and give the man who has taught me everything a hug is a memory I will always cherish. Thanks, Dad!

After the 60-day drying period, my ram officially scored 179 7/8" and was the top ram killed in Nevada in 2017. I would like to thank my amazing wife who puts up with my “hunting sickness,” her words, not mine. I would also like to thank everyone who helped me in one way or another on this hunt-of- a-lifetime. I hope next year you will have your turn because I have had my turn.