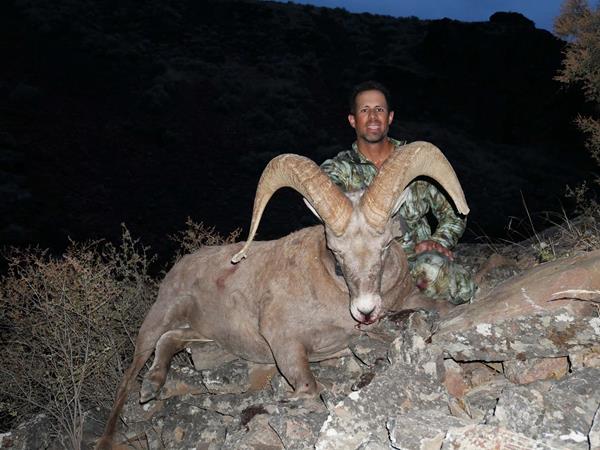 I love reading stories about sheep hunting and have always dreamt of the day I could write one of my own. I don’t have the means to drop a lot of money on a guaranteed tag, so I was always left with playing the draw game. My normal routine for the last 23 years was to check results and verify the bad news, but this year was different. I was a little late on checking the results, frankly because I knew what I thought it was going to say. You can imagine my surprise when email notifications came across my screen from Idaho Fish and Game. The first one that popped up said, “Sorry,” but the next one looked different. It didn’t read, “Sorry.” I couldn’t open it fast enough. To my amazement, it was my time and I was going sheep hunting.

So many things go through your head when you know you have a once-in-a-lifetime tag. I started calling friends, family, past hunters, and biologists to get as much info on my area as I could. With more information than any man could feasibly know what to do with, the stage was being set. Thanks to a very understanding wife and wonderful kids, I was able to spend a lot of time in the area. Excitement turned to unease quickly as my first three times out I never saw a sheep. Luckily on the fourth trip I found my first lone sheep, a 2.5-year-old ram. Now rejuvenated, the trips and sightings became more frequent. Still, no mature rams were seen until two weeks before my hunt was to start. I located a band of eight with two mature rams. To say I was excited is an understatement. I simply couldn’t wait for my hunt to start.

The plan was to spend 17 days in the desert, 3 scouting days and 14 hunting days. During the scouting days, I found sheep but no mature rams. My hunt was now upon me with no real plans of what to do on opening day. My only thought was to go in and try to find the band of eight rams. Opening morning came, and to my surprise, one of the other hunters out of three was in the same area. Even though I never ran into either of the other two guys during scouting trips, I was now accompanied by one of them. I don’t like to compete for animals because I think it takes away from the experience, so I left for another area. During the next seven days, I hunted all over my unit. I found a lot of sheep and decent rams but just not the one I wanted.

With the hunt now half over, I was getting a little nervous. The first seven days, I only packed my bow, but on this day, I chose to take my rifle as well. It helped that my good buddy, Oscar Williamson, was coming along to help pack it. The morning of day eight was absolutely beautiful. We looked over some amazing country, and within the first hour of light, we spotted three sheep with one young ram in the group. Heading deeper along the rim, we were now seven miles in with temps approaching the high 80s. With one lone juniper spotted, Oscar and I headed to take a break for the afternoon. It was a perfect place to get out of the sun and wait for the evening hunt.
I believe there are always turning points in a hunt, and I would say this was one of them. During my afternoon slumber, I was slightly awakened by the sound of rocks rolling. Not fully awake, it took me a bit to realize what I was hearing, but when I did, I knew instantly what it was. I flew out of the old sheep bed I was in and franticly looked for what was making the noise. After five minutes, I was in disbelief as I was staring across the canyon at five rams.

For the next two hours, we scrutinized each one. There were three rams that I thought to be worthy of my tag. We named them “Choco,” “#3,” and “Bling.” Choco was a chocolate-colored, dark-horned but heavily broomed ram. #3 didn’t have any standout features besides being the third ram to choose from. Bling was named due to a collar with a blue tag that had an 8 on it. Now I just needed to narrow it down to which one I liked most. I would have been happy with any of them, but for some reason, Bling really caught my eye. I really liked how far his horns flared out, almost reminding me of a Dall sheep. At that point, it was decided he was the one I would go after.
Now I needed to see if I could make a stalk with my bow. With my target across the canyon at only 250 yards, one would think it was a possibility. I hiked left for a mile, then right for a mile, but try as I may, I found no quick way to get down into the canyon. At that point, I made the decision that Bling would be a trophy to me regardless of my weapon choice. After the shot, we had a few tense moments as he fell off a 50-foot cliff but luckily landed safely below on a small ledge. I was in awe of the situation and beyond excited. I couldn’t wait to get my hands on him.
Unbeknownst to me at the time, the wait would be much longer than I ever thought imaginable. With four and a half hours of light left, we needed every bit of it to get to him, which included some cliff jumping, crevasse crawling, and water detours. Arriving just before dark, we still needed to get down to him and pull him off the ledge. After we got the sheep taken care of and down to the river, it was just before midnight. We were both physically and mentally drained.

At the point of exhaustion, we thought it best to stay here for the night. We ate some of the best tenderloins one could only imagine after such an ordeal. We would then sleep and in the morning walk out the eight miles back to our four-wheeler. All was going according to plan until about 2 a.m. when we had a heavy rainstorm pass over. Sleep was hard the rest of the night, and the pack out was grueling. Looking back at it now, it just added to the adventure.

I want to thank all the past hunters, biologists, and friends for all the information I received. It made this hunt special to me. I’m just so happy it was “my time.”