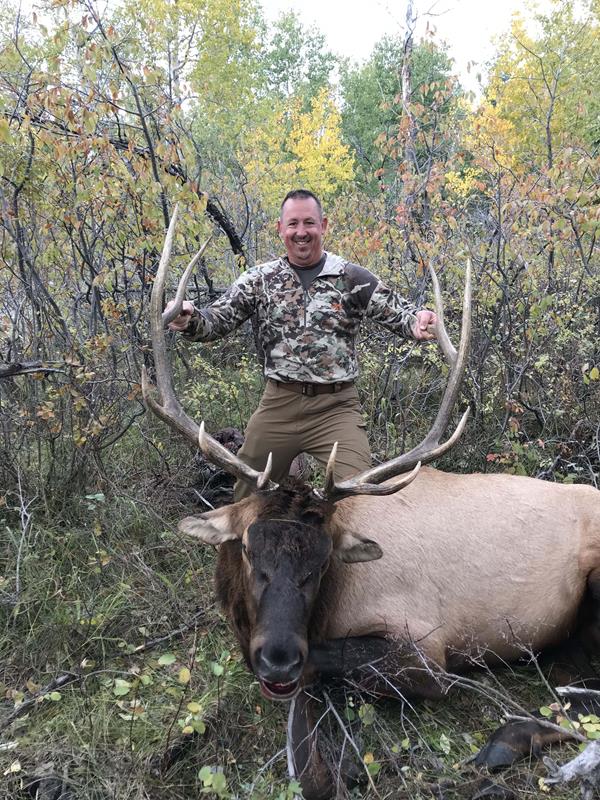 This elk hunting journey started out with the anticipation of an epic archery hunt. I had purchased an archery elk tag for Idaho’s Diamond Creek area and would be hunting with my brother. We hadn’t had the chance to hunt together for the last five years as I was on the East Coast and he was in Utah. We had planned everything out, and then one evening as we were talking, he mentioned that I should put in for a controlled hunt for this unit. Chances were that I wouldn’t draw, but it was worth trying as Idaho works its controlled hunts on a lottery system and not a point system. I said I’d put in for it. Weeks later, I received an email. Successful! I had to double check this email before I made any calls. Indeed, it was the email we are all looking to receive anytime we put in for a hunt. I quickly contacted my brother about this fabulous email I had received and all I heard on the phone was how he couldn’t believe that I had drawn.

I had to switch gears as this was not going to be the archery hunt I had been preparing for after all. I immediately went out and purchased a new Tikka .300 Win Mag and a quality Nightforce scope. I figured if I was lucky enough to draw this tag I had better be prepared for this opportunity with the best equipment I could afford. I spent a bunch of time at the range and became very proficient with this firearm.

I contacted Huntin’ Fool and asked if they could put me in contact with anyone who had drawn the same tag for this unit. Huntin’ Fool’s support was amazing as they sent me a list of four or five guys who had drawn that same unit. I started making some calls to ask for some general information and was greeted with nothing but happiness from all of the guys I contacted. Everyone was very supportive in offering up some general information about what to expect. Without Huntin’ Fool, I would have never had anywhere to gather this kind of information. One of the guys I talked to stated, “There are elk from one end of this unit to the other.”

My brother still had his archery tag for the same unit, so we spent every available moment in the unit chasing elk. We had only looked over a small section of this unit, but we were seeing elk almost every day. I have always heard don’t leave elk to find elk. We had some close calls on his archery hunt, but he ended up eating some tag soup. My hunt was starting the very next day. As we were eating dinner the night before my hunt started, my brother and his hunting partner came up with a game plan for the next morning. They asked me what kind of animal I was looking for. I replied I was just looking for something that got my blood pumping. If I saw a unique bull, I’d take it, broken off or not.

We headed out before daylight to give the area a listen. We let out a couple of bugles and had bugles shot right back at us. My heart was racing with excitement. What size of animal were we hearing? Could this be the one? Then, at first light, we started to see the elk. We glassed up a nice 5x5, but he wasn’t the age class I was looking for. All of a sudden, my brother quietly said, “Mike, look at this one.” I pulled up my binos, and he looked nice. All I could see were the white tips. I couldn’t count his points, but I knew he was the one. I threw up my rangefinder, and he was at 1,365 yards. I told the guys he was the one we needed to close the distance on.

We headed that way, and it looked as if we had missed them moving through this area. Then, there was one of his cows. I threw up the rangefinder and ranged her at 557 yards. That was as close as we were going to get. I laid down and made myself steady and started watching as his cows funneled through the opening. Then, I saw those white tips moving to the clearing. My blood was pumping like never before. He stepped out and stopped right in the opening. I slowed down my breathing and slowly squeezed the trigger. Boom! He just stood there. I quickly loaded another shell and sent it. The bull just stood there.

My brother asked, “Did you miss?”

I said there was no way. I knew I was zeroed and money out to this distance. I racked another shell, aimed a little higher, and let it go. This elk never shrugged or hunched like all other game I have shot. He veered off to the left as his cows headed to the right. My brother asked if I hit him, and I told him I was right on. My brother said he would stay there and Ken and I could go see if there was any blood.

We quickly started up the hill to the bull’s last known location. We got up there, and all I found was one small drip of blood. My heart sank, but I knew I had made a good shot as I didn’t feel that I pulled any of the shots. As Ken and I were searching for the next blood spot, we both smelled elk. I knew he had to be close, so I started to follow the scent rather than looking for blood. I stared to the left as I knew he walked that direction, and there he was lying about 20 yards from where I had shot him. I was in awe to his size. This was the first elk I had ever harvested. I couldn’t believe how big his body was. This was the class of animal I was searching for.

I have never been the type of hunter who has to put a tape measure to the antlers to judge the class of animal. If I see an animal that gets my blood pumping, that’s the one for me. As Ken and I were waiting for my brother to arrive, I just about lost it. I couldn’t believe I had actually harvested my first elk. As my brother arrived, I couldn’t thank them enough for all of the help they had given me and how happy I was that they were there to have this moment with me. This hunt has etched its place in my memory forever.