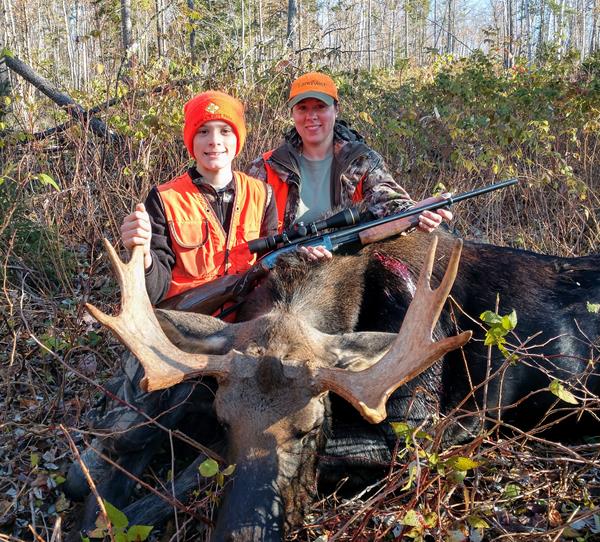 My heart was racing, and I could barely breathe. I whispered, “Oh my gosh!” A bull moose came lumbering out of the woods straight towards me. I had been on seven different moose hunts, but now it was my turn to pull the trigger.

It was the summer of 2020, and my dad and I were heading home from our camp in the North Maine Woods when he got a text from a buddy saying that my mom had won the lottery. Her name had been picked for a moose permit, and I was the subpermittee! This was my mom’s second permit, so getting another permit was very lucky. My mom was so excited. She told me that during the hunt if everything worked out she was going to let me shoot the moose. I was really thrilled, but I was even happier when I found out that my family from Georgia would be coming up because I don’t get to see them very often.

October finally arrived, and we packed up all of our gear and my family headed off to camp. My pappy came too. We drove through town and up into Allagash. We passed Little Black Gate and headed to camp. My cousin, Eli, was so happy to stay at our new camp for the first time. I was happy to see him and also to get the chance to shoot a moose. This was going to be an awesome week!

On the first day of the hunt, we woke up in the dark at 4:00 a.m. After eating a hearty breakfast, we headed out at 5:30 towards our hunting spot to wait until legal shooting, the time when it is light enough to shoot. The plan was that while my pappy was following us slowly in my dad’s pickup just out of sight, the rest of us would be walking down the road in search of our moose. My father took out the funnel-shaped moose call to try to attract a bull. Uncle Chad heard something heading our way! We rushed down the road and stepped down into the ditch. My dad radioed Pappy to stop the truck and turn off the engine. He then made some moose calls, but we didn’t hear anything.

We kept walking until we reached a bend in the road that led to some skidder trails. We then sat down and called for a while. There was a brook further in the woods, and it sounded like something was running through it. Then we heard what sounded like antlers being rubbed on some shrubs. We got up and walked toward the noises, but there wasn’t a moose in sight. We radioed to meet back up with the rest of our family and decided to try a new game plan.

We drove around for the rest of the morning and early afternoon and shot some partridge. Later in the afternoon, we went back to our hunting spot but entered from a different direction this time. We trekked to a spot near a swampy section and sat down. We made more calls and raked some shrubs. Suddenly, my dad saw a female moose, a cow. We continued our cow calls in case there was a bull with her. My dad and I made our way slowly toward her, but she eventually ran off.

Only 20 minutes remained of legal shooting, so we returned to the truck and drove up a small hill. Just on the other side, my dad saw a huge bull standing in the road. We got out of the truck, and I loaded my gun and tried to get into position. Before I could get a shot, the bull bolted into the woods. My dad tried to stop the bull with cow calls, but it was too late. He was long gone. We drove back to camp and had supper, relaxed, and then called it a day. As I drifted off to sleep, I was hopeful that we would see that bull again in the morning.

The next day, we woke up at 4:40 a.m. and ate our breakfast, and then we headed out for day two of the hunt. We returned to our hunting spot and drove the road instead of walking to cover more ground. We came to the corner with the skidder trails that we had walked into the day before, and there were three moose standing there. One was a medium-sized bull. We got out of the truck, and Mom and I loaded our guns. I saw the bull, but it ran off before I could get a shot. We went down the road and heard the moose crashing through the woods. We came to a fork in the road, and the cow crossed in front of us. My dad said to get ready because the bull would be right behind her. He was right. Suddenly, the bull was standing only 20 yards away. It stared at me. I picked up my gun and rested it on my shooting stick. I aimed right at the heart and pulled the trigger. Click! There was no bullet in the chamber. I reloaded my gun, but the bull followed the cow into the woods. We went down a side road to where the bull would come out next, but it just kept running and didn’t stop.

After returning to the truck, we planned the rest of the morning. Arriving to the back area of the swamp where the bull and cow had run, we crept in as slowly and quietly as possible. One step after another, searching for the bull. We continued along the edge of the swamp, and then there he was! The bull was right there, about 40 yards away, munching on raspberry bushes, not even aware we were there. I pulled up my gun, but I didn’t have a clear shot. My dad made a call, and the bull started to walk toward us. “Oh my gosh!” I whispered. My heart was racing. My dad let out another call, and the bull stopped. Pow! The bull fell down. It was a perfect shot right behind the shoulder. We were hugging and celebrating, but then we saw the bull get back up. My mom and I both took shots, and the bull fell again.

We waited a few minutes and then walked over to the moose to be sure it was dead. I had done it. I had taken my first moose! I was so happy that I was shaking. I named the moose “Chance” because it was the same moose I had tried to shoot earlier that morning when my gun didn’t fire. I’d been given a second chance. It doesn’t get much better than that. I can’t wait to hear that story again and again over the years with my family and friends.