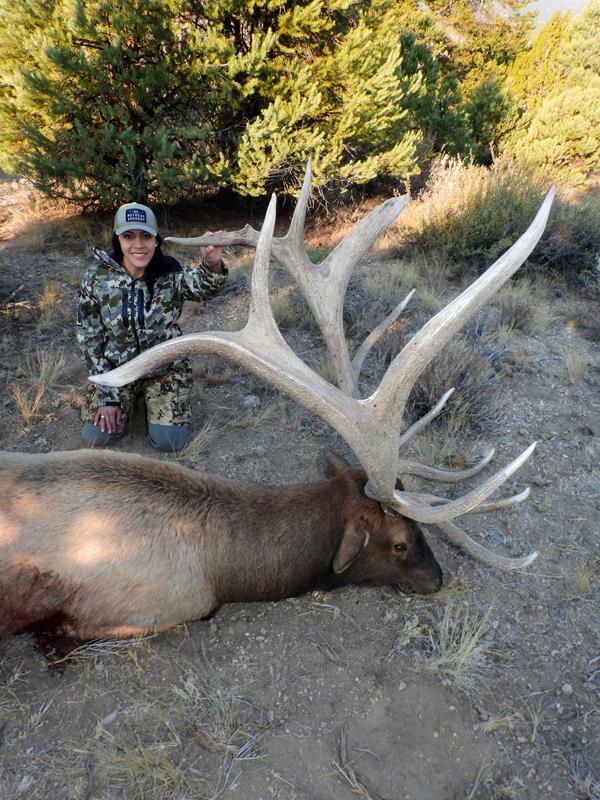 I have been very blessed and fortunate within the hunting industry. My husband, George Garcia, has been a licensed hunting guide his entire adult life (A3 Trophy Hunts) and with that has come many open doors and benefits. Together, we started an apparel company within the hunting realm called Team Smackdown. Since its inception, we have welcomed many friends and family members into our lives from all over our great country. The hunting community can be very trivial, yet it possesses some of the best people on earth. While Austin Atkinson from Huntin’ Fool was helping us apply in Nevada, he mentioned, “Don’t forget to check the box for the Silver State Tag and other special tags.”

After draw results in Nevada were posted, we received our emails of not drawing any of our choices. We didn’t have high expectations of drawing, but there’s always hope. The next day while driving to town, a voicemail came through on George’s phone. It was Mr. Jack Robb from Nevada DOW. The voicemail stated that he needed to talk to Vanessa Garcia about the draw. As it came over Bluetooth, we both looked at each other knowing that it was most likely about a tag. We quickly returned the call and Jack asked if we had checked the results. Georgie replied, “Yes. We both hadn’t drawn.” Jack said to look again and congrats because Vanessa had drawn the Silver State Tag. We were blown away! George immediately contacted his friend, Brock Rowley, to share the excitement.

Brock said, “We got you. Please come with us.”

As growing season played out, we knew it was going to be a brutal year. The size of antlers was down, and we knew that breakage would be very bad because of the drought conditions. On top of it all, we were very busy with work. We had very high hopes of a few scouting trips and potentially killing a velvet bull. On top of all the work we had to do, Georgie had drawn an Arizona archery antelope tag as well as an archery bull tag. Just when we thought our plate couldn’t be any more full, we lost two very special family members. My great aunt, Lola, and my very best friend, my nana Maria.

Bull Ridge had just killed a giant bull with one of the other special tags. Brock texted and said to get up there when we could, but he had availability for the next three weeks. We were right smack in the middle of a big job, Georgie’s hunts, back-to-back accidents, and multiple funerals. Everyone was counting on us, but we just couldn’t break away. Finally, Trevor and Brock said, “You need to get up here now!” With the rut being full bore, we knew the breaking was going to start. We packed our bags and drove all through the night.

I woke up in the parking lot of Sportsworld in Ely, Nevada. They had donated a gift card in the name of the Silver State Tag recipient. We went in to receive our gift and shop around while waiting for Brock to return from his morning scout. I was shopping away when Brock walked in with a big grin and said, “Let’s go get your bull.” Our number one bull was in a good spot, and he had just seen him that morning. We went to the range to double check the rifles, threw our bags out at Richard Rowley’s house, had just enough time to change, and off we went looking for “Buford.”

We met up with Trevor, Chuck, Richard, Carl, Russ, Allen, and the boys to game plan the afternoon hunt. Everyone went to different spots to try and get an angle on Buford as we packed up the mountain on a big vertical hike. Once we got up there, the herd was in a rut frenzy. There was nonstop bugling and fighting going on all around us. We tried sifting through all the elk, but it was just too difficult of a task and we were worried that Buford was one of the ones fighting. Trevor called in a very nice bull that made it to about 15 yards for an awesome first afternoon of elk hunting.

The next day, we tried to relocate Buford. Everyone set out to different spots trying to get an angle on the mountain range but to no avail. He hadn’t shown that morning or the afternoon. We were worried that all the fighting was antlers breaking. Sure enough, on day three, Trevor climbed up in the canyon and found Buford broken. Time to find the next bull. There was a sickening feeling in our stomachs as we knew it was about to get tough. We set out after the next biggest known bulls. We went down the list, found every one of them, and every one of them was broken. The worry really began to sink in. With about 15 minutes of light left, Russ came over the radio and said, “I got Frog right here in front of me and he’s not broken.”

Brock said we could get there in time, which was pretty funny considering it was about 20 minutes away. After “sending it” on a couple of spots and a few near misses of sudden death, we got there about five minutes too late. The bull had a deer hunter drive by and pushed him in the trees.

The next day was opening day of the general deer hunt. It was another hump that we were worried about. Trevor and Brock had hunters starting, and the rut overnight seemed to slow as well. We decided that we were going to hunt Frog and that was it. Richard, Georgie, and I went out to meet with Russ and his son to see if we could relocate Frog. We got there about 45 minutes before light, and sure enough, we could hear a couple bulls right where we left him. We loaded all our gear and waited, ready to run.

As light began to break, Georgie said, “There he is,” and off we ran. Richard stayed at the truck and watched as we ran in with Russ. We had to cover about 600 yards to get into position. As soon as we got there, the deer hunter traffic began and the bull was headed for cover in the trees. I quickly set up over the tripod and Triclawps as Georgie was ripping cameras out of the backpack and trying to get set up himself. Frog had one cow and was determined to get her into the trees. Georgie quickly got a range and dope for me as I jacked a round. 503 yards. It was all going down extremely fast until I got him in my scope. Everything seemed to slow down as I knew this was it. Frog was retreating quickly, and we were worried that we weren’t going to get the shot. Georgie tried to cow call a couple of times in little openings, but he wasn’t stopping. Finally, he hit the edge of the very last opening we had, George let out a desperate cow call, and he stopped! My tunnel vision kicked in, and my finger settled for the final squeeze. My heart was beating in my ears. Flashbacks of the whole trip came back to me. It all came down to this. Make it happen! Inhale. Exhale. Pause. Boom! The bull lunged out of my scope. Real time came back, and I was in a panic to reload when I heard Georgie say, “You got him, babe. He’s down!” I hit him right through the heart and he went about 30 yards.

What a surreal moment knowing everything that had happened that year. The struggles, life’s ups and downs, family and friends passing, stress of building for a new home, and I sat there feeling so blessed. It was a long, yet beautiful short journey to this moment. New special friends, relationships, and my dream bull! We walked up and the mass kept growing. Frog was extremely special and so was this whole experience.

I want to thank God for all my blessings. I also want to thank my husband for being my number one fan and pushing me to my limits both good and bad. Thank you, Austin and Huntin’ Fool, for reminding me about the draws. Thanks, Richard Rowley, for all the generous hospitality and friendship. You are amazing. Thanks to Brock Rowley for all the good times, the claws, and your unbelievable efforts to fulfill my dreams. Thanks to all the Bull Ridge boys, Karl, Austin, Trevon, Allen, Jake, Trevor, and Chuck Marques. Thank you for the hospitality and good times. We are so humbled to have shared this hunt with you guys and all the moments that made it my number one memory in the field. You are all a class act, and the generosity is second to none! We will forever be appreciative and will always be there for you guys.