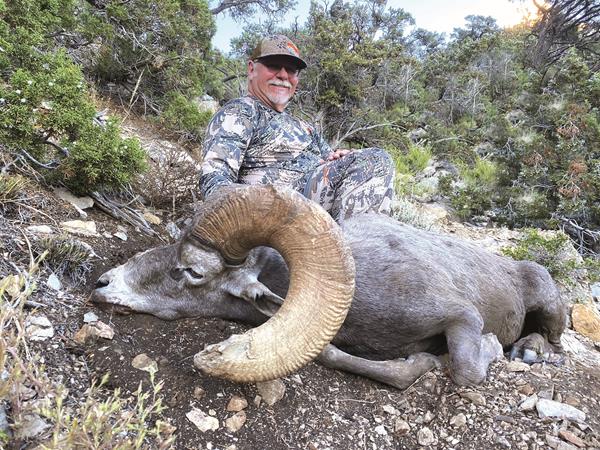 Like everyone else in Nevada, the week of the big game draw couldn’t come fast enough for me. I got home from work, and there was a message from Jack Robb with the Department of Wildlife asking me to return his call. I could not imagine what this was about. When Jack called back, he asked if I had checked my email and I said not lately. He then told me that I had drawn the Silver State Desert sheep tag. I was speechless! Everyone I know puts in for this dream tag, but many, like me, believe it will never happen to them. Jack then told me about the prizes that came with this tag – Vortex binoculars, Vortex spotting scope, a rifle and scope from NBU, head to toe clothing from Sitka, and a pair of Kenetrek boots. This was really a dream come true.

I called my wife and told her that she would not believe what tag I had drawn. It was finally starting to sink in. I then called a good friend, Ken Tavener, telling him that I was disappointed that I had not been drawn for the California sheep tag that I was hoping for but that I drew the Silver State Desert sheep tag. Ken said, “Are you kidding me?” He asked if I had an outfitter in mind, and I was hoping he had a suggestion. For those of you who don’t know, the Silver State Tag lets you hunt anywhere in Nevada for Desert bighorn except the unit where a bighorn was killed the year before. Also, the hunt is open September 1-January 31. Ken is good friends with Andy and Josh of Ground Zero Outfitters and suggested that we all meet and get to know each other. We spent hours talking about sheep and what I was looking for in a ram. The next week, my wife and I decided to book my hunt with Ground Zero Outfitters.

Throughout the summer, I received photos of good rams to consider. Andy would ask my opinion on what I thought about them. Andy and I picked the number one and number two rams to go after. Number one was in the Mesquite area. We decided to stay in a hotel and travel to and from the hunt area due the intense heat.

On Monday, August 31st, I met everyone in Mesquite. It was the day before the hunt, and we discussed opening day. We decided that Josh, Andy’s son, my friend, Ken, who left his elk hunt to come and hunt with me on my sheep hunt, and I would hunt from one location and Andy and Teddy would go check out another where big rams had been spotted. We left the hotel at 3:30, and after a few hours in our location, we spotted the ram we were looking for. He was nicknamed “DeeBo” because he was the biggest bully on the mountain. He was with a ewe and another large ram, which we named “Chip,” as well as a smaller ram. Chip was missing the top half of one of his horns, otherwise, he would be a dandy. This group was out at 948 yards for most of the day and showed no interest in coming our way. After a lot of pictures and video throughout the day, Josh heard footsteps and a ram walked by us at 8 yards. He stopped at 40 yards and stared at us for about 20 minutes.

That evening, we met back up with Andy and Teddy at the pickup and they brought street tacos for dinner. While eating, we discussed what each group had seen and looked at photos. We decided to go back to our location and look for DeeBo in the morning.

Day two was going to be even hotter at 109 degrees. We started out at 2:30 a.m. and hiked back to our lookout and spotted DeeBo. The group was at 1,000 yards. After watching them for a while, Josh, Teddy, and I made a stalk up the drainage while Andy and Ken stayed behind to keep an eye on the sheep. We hiked up to a point where we were 300-400 yards away. The hillside was covered in juniper trees and deep gorges, making it hard to locate the sheep. DeeBo and Chip were chasing the ewe throughout the day and would lay under the trees when they got tired. While we were hiking, Ken saw DeeBo T-bone Chip and send him flying off his feet. Finally, seven hours later, DeeBo stepped out at about 300 yards. I took my shot! Teddy, watching through binoculars, said that DeeBo dropped like a rock. Immediately after DeeBo hit the ground, Chip took off with the ewe and went over the next ridge.

There were hugs and handshakes, and even a few tears were shed. It was a very emotional time as I was remembering my first sheep hunt with my late father-in-law, Fred McCloud, in 2003. He would have loved to have seen this ram. When we got to the ram, we were amazed at the mass and how well he carried it. Many pictures were taken, and Josh and Teddy skinned and distributed the meat for the pack out.

Thanks to everyone who helped make this happen – the state of Nevada and the Department of Wildlife for allowing the opportunity for anyone to draw this tag, all the prize sponsors, NBU for putting sheep back on the mountain, and Ken Tavener for his dedication and support to me and introducing me to Ground Zero Outfitters. Thanks to Andy, Josh, and Teddy for a job well done. And last but not least, thanks to my family for their support. I will always be grateful to all of the above for the opportunity to harvest my best sheep ever.