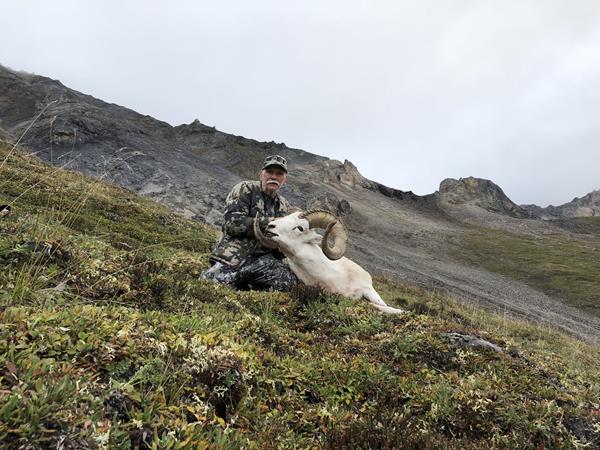 So goes the conversation between a hunter and a guide who have bad hearing, bad memories, or maybe both. I was sitting back, enjoying the comedy routine, but only briefly since my dad, Jack, and I were both in a position to get two beautiful Dall sheep rams in a matter of seconds. We were in Alaska for the second time hunting big game. This trip brought us to the Brooks Range hunting with the same outfitter as our previous excursion, Jonah’s Alaskan Outfitters. Jonah is one of the most ambitious and accomplished bowhunters you will ever come across. For a man who has yet to see his mid-30s, he has already made quite a name for himself. We had wanted to pursue sheep for some time, but as is valid with so many big game hunts in today’s world, it requires serious money and significant time commitments. Adding to the pressure of this trip was the fact that my wife was seven months pregnant with our first child when we were due to leave for the hunt in August. It took every negotiating skill and tactic I had to convince her that going on this hunt was the just and holy thing to do.

We arrived in Fairbanks and had one day to kill before we flew out north to camp. If you have been to Alaska, particularly this time of year, you know about the weather and the havoc it can wreak on your plans. Our one day in Fairbanks ended up being three days due to fog, rain, and poor flying conditions. Spending the first three days of the hunt in a Hampton Inn is not what we were anticipating.

We finally made it out to base camp to meet Jonah and our guide, Harold Fahrenbrook, also a highly acclaimed and proficient bowhunter and guide, and the rest of the hunters who would be joining us in camp. For this trip, we had a meteorologist (who immediately was berated by all for the poor weather because of course he had something to do with it), a gemologist, an oilman, a home builder, a retired coal miner (my dad, Jack), and a guy who works in construction (me). One by one, Jonah started taking us out. While you wait your turn, you do what all men in sheep camp must do – eat, tell stories, eat some more, and watch a campfire burn. We were the last ones in camp to go out and were anxious to get started.

Once we made it to spike camp, we got our glasses out and hiked to a nearby ridge to glass a mountain that our outfitter had seen sheep around the week before. As we belly crawled to the edge of the hill to shield our silhouette, we spotted numerous sheep, including three nice rams. For two fellows originally from the hills and hollows of West Virginia, it was truly amazing to see these creatures for the first time. My first impression was how majestic they looked. It seemed surreal. Harold spent the next 10-15 minutes checking out the rams to make sure they were indeed legal. To me, a novice, it was fascinating watching someone who was a couple of miles away from the animal count each tiny ring on a horn to make sure it met the required age limit. Yes, Swarovski Optics certainly help, but what a skill! I guess that’s why he’s the guide and I’m the tenderfoot hunter. Harold stayed steady on the glass and then said five of the most beautiful words you’ll ever hear, “We’ve got two legal rams.”

We went out the next day after a couple of hours of delay waiting on the fog to lift. As we were headed down the mountain and up to where we spotted the sheep, it reminded me of the dozens of articles I read about the need to be in “sheep shape” before going on these hunts. This need is, in fact, an imperative and not to be underestimated. We hiked for several hours and got ourselves in a position to make the final approach. We had one last ridge to crawl to get into place to take the shot. As we reached the crest, we carefully poked our heads over and saw what we came for some 400 yards away.

I had already told Dad that he got first shot. Harold picked out the big boy and made sure he knew which one it was. Then things got comical. We had never shot at anything live or inanimate over 300 yards before, so when Harold said 400 yards, we were crushed.

“You have to. Can’t get any closer with just blades of grass between them and us,” said Harold.

“Alright, John, this is it. You comfortable and on him?”

“It’s Harold, but okay. Take him when you’re ready.”

I was looking through my scope at Dad’s ram in case he missed. Crack! The .270 sounded off with sheep scattering everywhere, but what about Dad’s ram? Where did he run off?

“You smoked him, Jerry!” exclaimed an elated Harold.

Even though we were now on our mistaken third name, Dad had made one heck of a shot and laid him down. Now it was my turn. Our guide’s helper on the hunt was watching the chaos unfold and was tracking the ram I would shoot. “He’s second from left, Dave, 460 yards.” The millennials were 100% on the right name game. The sheep was quartering towards me and looked like a flake of dust at that distance. “Crack!” went my .270.

“You missed him, take another shot!”

“Man, you are a horrible shot.”

“Here, use John’s gun.” Dad’s name was incorrectly back to John now. I finally settled down, took a solid rest, and squeezed the trigger. Crack!

Handshakes and congratulations began immediately. We had just accomplished something that thousands of hunters only dare to dream. Not only did we harvest two beautiful rams, but we did it together, father and son. I won’t bore you or try to gain your sympathy with how hard the pack out was (it was brutal). I’ll save it for the other guys to tell that story. For Jack and David Marko, going two for two on the first day of the hunt for a Brooks Range Dall was the only thing that mattered. Make no mistake about it!