Moose in the Swamp 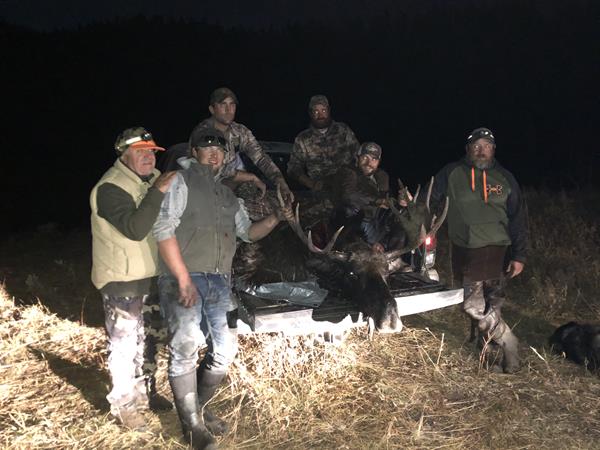 If you are reading this article, you are just like me. You’re playing the bonus and preference game. I started over 25 years ago when some of the Fish and Game Departments in some of the western states had not adopted the bonus, preference, or point system for some or all of the available big game. I have been very blessed to have eight once-in-a-lifetime tags so far, and I still have a ton of points in nine states. I am elaborating on this “point game” to demonstrate that you must be persistent and stay in this game if you wish to succeed.

My moose tag this year was for a small unit in northwestern Wyoming not necessarily famous for trophy or quality. I had the only non-resident tag, and after reading the description and the statistics for this unit in Huntin’ Fool, it was obvious that in the past years hunters averaged about two weeks to harvest a moose. I decided to try and pull this hunt off without hiring a guide but with the idea that I’d dedicate as much time as needed to find a decent moose during the 30-day season.

My friend, Al, and my brother, Sassan, accompanied me. Our priority was to find a place to stay. Al had hunted this unit previously and knew of a National Forest cabin that was in our unit. When I called to enquire about it after I drew the tag, I was told that all the existing cabins that normally would be available to rent were off limits to residents and non-residents until further notice due to the Coronavirus. Well, that was frustrating. I wasn’t even sure that Wyoming would be open for the fall hunting season. After a couple months, I got word that the fall hunt was on and the cabins would be offered to sportsmen to rent soon. The first morning they opened the website, I booked the cabin.

Three days before the season, we packed and drove 12-13 hours to Wyoming. I had already spoken with the biologists and a couple of outfitters about moose forecast and, in case I was successful, game retrieval. Al knew of a game retrieval service from his previous trip, and by asking around, we found it. We went to see Sam, the owner of Sleeping Indian Outfitters, and organized a plan in case we were successful hunting a moose.

We scouted for two days, driving the National Forest roads and hiking the high points and the likely areas looking for moose. We were finding some young bulls and cow moose daily and were optimistic that we could find a shooter bull if we kept trying. We spotted some moose in some nasty marsh flats on the first and second hunt days from the glassing points on top of nearby mountains. We wanted to get in position the following day, but it was not easy to get to the right place. We battled the deep water in the swamps in the dark and had to bushwhack for hours to cross. We made it early to be in position and saw a couple of mature bulls. The first bull took his two cows and entered deep, dark timber before we were in shooting range. Al started to cow call to lure the bull out. That bull never left his cows, but unbeknownst to us, Al had called in another moose from about a mile away from the middle of the meadows with tall willow brush bordered by heavy stands of conifers. I saw this bull’s antlers swaying left and right when he was in the middle of the swamp. He was coming toward us to check the source of the cow call. Unfortunately, when this bull cleared the willows, we realized that he had one side of his antlers broken off.

Some of the elk hunters in the unit told us they knew of a mountain meadow that had always produced moose in the past year, but none of them had seen any this season. We had already scouted this meadow and had hiked it a couple of times, so we went back to see if we could find the same two bulls but no luck.

For the evening hunt, we decided to hike and hunt the mountain meadow one more time. At the entrance to this canyon, there was a sign that warned hunters of the presence of a grizzly bear with cubs. I feared that it may be the reason we were not able to see any moose. By the time we arrived, there were two hours left of legal shooting light. We hiked all the way to the end of the canyon and started to head back. When we were quietly passing the widest pond, I heard a bull grunting and snorting on the opposite side of the canyon inside the dark timber. I immediately walked over about 25 yards and sat motionless next to some bushes. I signaled Al to cow call and hopefully try and pull him out. Oh man, did that work! Not only did he come out of the dark timber, but he was on a string and walked to the middle of the pond facing us. My brother was by my side, trying to get the camera to focus on the moose in the dim light. I signaled Al to get close to me while I had the scope on the moose. This was exciting, but what would I do if I dropped him at only 90 yards in the middle of the deep pond?

Looking at his antlers in my riflescope and listening to Al and Sassan telling me to shoot him, I hit him square in the chest with the intention of a follow-up shot and not giving him enough time to turn around and enter the thick timber. It worked. He took the first bullet hard, and as he turned sideways, I followed up with two 190 grain AccuBond Long Range bullets and he started to topple over in slow motion. We hugged and high fived and then asked ourselves what to do next.

I got ready to wade in to try and get to where he was half submerged in the pond. Halfway into this nasty swamp, I was forced to retreat and abandon the idea of reaching him. We hiked back to the truck in jubilation and praising God that we did not have to hunt 14-15 days to find and kill a bull. As soon as we had phone reception on the paved road, I called Sam and told him we had a bull down and I was on my way to see him. When we arrived, I told him how this whole thing happened with only 30 minutes of shooting time left. He took a deep breath and asked if we had field dressed the bull. I told him I tried to get to him but it was impossible. He said we must go now! My jaw dropped to the floor. The temperatures dropped to 22-23 every night and I thought it was cool enough to leave the retrieval for the next morning. Sam said the bull was too big and had a big mass, so he would not cool off and possibly be spoiled if we waited until the next morning. Sam finished his dinner, made a couple of calls, and then we went back with chains, steel cables, winches, and waders in three full-size trucks.

We reached the pond, and I showed them where the moose was. Several powerful spotlights and binoculars came out, and everyone was congratulating me when they saw his antlers. All five of the helpers put on their waders, grabbed some ropes and a cordless saw, and entered the pond. I have no doubt that each one was smiling and having a blast joking about how to do the field care in their waders and how to pull the pieces out.

When they reached the bull, Sam yelled loudly, asking if I wanted to have a shoulder mount. I thought for a second and said no. He replied, “God bless you!” I knew their work got so much easier. The work started at about 8:30 p.m., and the scene reminded me of the Egyptians pulling huge stones to build the pyramids. These guys were impressive and pulled all five pieces out at midnight. A small celebration started with beer, tequila, and whiskey. By the time we left, it was 2 a.m., but what a relief and a pleasant experience.

My sincere thanks to my friend and my brother for accompanying me. I owe a great deal of gratitude to Sam and the Sleeping Indian Outfitters team for having such a positive attitude and providing priceless help. Keep applying, and good luck!