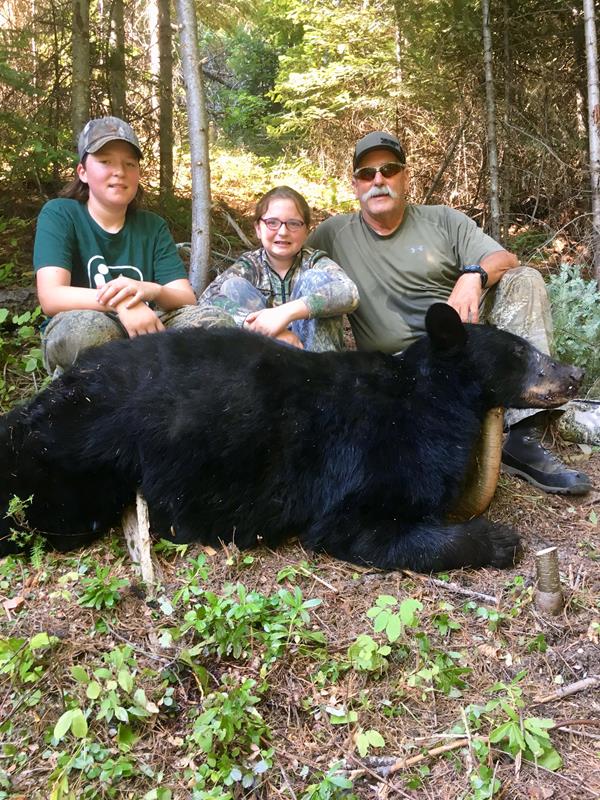 Idaho is a great state for junior hunters with 10 being the starting age for hunting. The state makes it very affordable, as well, encouraging those who are interested to start their hunting journey. When my granddaughter, Meredith, turned 10 in December, she was very excited to have the opportunity to be able to go on her first hunt in Idaho. Mere already had the hunting bug as she had taken three deer in Washington, but she had not had a chance for a black bear. Her goal was to be able to take an Idaho bear bigger than her older brother did four years earlier when he turned 10.

Mere wanted to be involved with all the aspects of the scouting, bait permits, and gathering of apples from a friend’s old homestead orchard. She has grown up around hunting and was well aware that it isn’t an easy task. Her dad, Nick, had a good location selected. There was good bear sign and a good spot to be able to shoot from the ground with space so her brother, Dan, Nick, and I could all sit together over the bait. Nick had set the bait up so a bear would have to be slightly quartering away with its head down to provide a clear and hopefully quick kill for Mere. The spot was 75 yards and slightly down slope, but it quickly turned extremely steep with very thick cover in all directions except our spot.

The season opened, and we did our best to find a day when all four of us could sit the bait together. Nick’s cameras showed a very nice bear hitting the bait during the night with occasional daytime appearances. Finally, the day arrived. We parked at the end of the road and the four of us hiked down to the bait site. Upon checking the camera, we saw the bear had taken a midday snack, but it still had plenty of food for an evening sit. We wondered if it would be worth sitting for the last four hours of daylight since it had eaten earlier. Our optimistic Mere was positive the bear would be back, so we made ourselves comfortable for the remainder of the evening. The afternoon was warm, and the bugs were thick, becoming very annoying, especially for the kids, but they hung in there. Mere was sitting between Nick’s legs and was able to lean up against him with the Weatherby 7mm-08 on a bi-pod in front of her. Dan was to Nick’s left with his 30-06 as a backup or if we had more than one bear. I was behind and between them so I, too, had a clear view of the bait and surrounding area.

With only 20 minutes of legal shooting light left, a big black bear head poked out from around a dead tree and looked in our direction. Nick and I simultaneously said, “There it is!” Mere leaned into the Weatherby and patiently waited for the bear to move the remaining 10 yards to the bait. The bear would take a step, look, smell, and listen before the next step. With only five or six yards to go, it decided all was well and walked to the bait, put its head down, and started to munch on the apples. The angle was a perfect quartering away shot, and Nick whispered for Mere to shoot behind the shoulder, aiming for the offside shoulder. She was having a bit of a problem determining what was shoulder and what was not with all the long black hair. Nick got her squared away and reminded her to breathe, squeeze, and watch the shot hit. Mere announced she was going to shoot, and the bear kept in the same spot. At the sound of the shot, the big bear crumpled down as if that was going to be the end. Nick and I calmly whispered to chamber another round, and Nick assisted her with it. I had the binoculars on the black mass, and Dan had his gun on it over his pack. Just as we thought it was over, the bear jumped up and began to run straight away. Mere shot a second time, and the bear fell, rolled, and took off again. It all happened fast, and suddenly, the bear was gone into the steep, dark cover.

When we arrived at the spot of the shot, there was very little blood and the ground was all torn up. We followed the tracks until they entered the thickest cover and dropped off vertically. Now it was decision time – do we track a possible wounded bear into cover with Mere and Dan, or do we wait until morning? As all hunters know, leaving is tough, and if you do, the night is a sleepless one. We made the choice to leave, explaining the safety aspect to the kids as well as the importance of always going back. We drove home and decided to come back at first light.
Nick and I knew this had to be a dead bear but hoped it did not go far. We strapped on the mostly empty pack frames, hoping for a heavy pack out, and headed down the same trail as the evening before. The gridding began with Nick and me each taking an area while leaving the kids in a safe location on top. As the hours passed, frustration sunk in as we found no sign of the bruin. After another couple of hours, we met up on top again and took a break. The total disappointment was apparent on Meredith’s face. We had the discussion about making a good faith effort and that if you hunt long enough you will lose an animal. Nick and I told her we would change sides and make one more solid attempt.

Meredith led us in a prayer, and we took off again. I was about as far down as I was going to go and made a turn for another grid line. I suddenly picked up a smell, determined the wind direction, and headed towards it. I lost the smell and figured it was just wishful thinking when I saw a black shiny spot out of place. Yep, the big bear was right in front of me. I called out to the others and told them to come on down. The kids called for their dad. Nick and the kids made their way down as fast as they could. When they arrived, I had cleared a small spot and had the bear propped up, showing off the size.

After the hugs, cheers, and photo session, we skinned the bear for a rug and boned it out. All three shots had hit the bear. The first one from Mere looked good but maybe just a bit far forward. We each packed a portion into the four Nimrod packs and were able to take it all out in one load. Once we got back to town, we measured it at 6 1/2' and checked the skull in with the folks at Game and Fish. The skull estimate was about 19".

Meredith achieved her goal of taking a bear bigger than her brother, but Dan just said, “Wait until next year.”