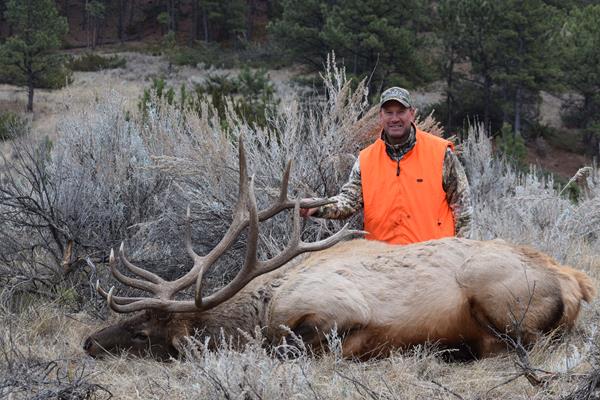 “Check it again, please,” was my response as I continued to drive down the road. I had just asked my friend, Butch Wiese, to check the draw results on the Montana Game and Fish website. Sure enough, I had drawn an either-sex elk tag in a coveted hunting district. I had to call my buddy, Jeff Wood, to let him know we had just won the lottery for hunting elk in Montana.

The first day of the hunt arrived, and Jeff and I had decided to utilize Burke Ranch Outfitters for this special hunt in the Missouri Breaks. I had been talking to Kelly Burke of and on over the past five years, which allowed me to feel comfortable choosing him as our outfitter. Jeff and I both possessed an elk tag and a deer tag. We had agreed that elk would be the first priority and Jeff would take the first shot since this would be his first chance to tip a bull elk over. During the first day, we located a possible 150 class whitetail that we turned down because we knew elk had been seen in the general area the day before.

On the second morning, we walked to an area to glass and I spotted a bull bedded below a ridgeline, but it was a small 4x4. In the afternoon, we changed gears and jumped in Kelly’s boat to scout the shorelines of Fort Peck Lake. As we traveled along the shoreline, we located a herd of 45 elk but didn’t see any shooters. Later on, we spotted a mule deer buck feeding and thought we could put a good sneak on it. We cruised past the deer, and I climbed up and over a ridgeline to set up to shoot. After looking it over, I decided to pass on it. We finished our second day with no bullets fired, but that was about to change.

On the third day, Kelly took us to a different area and told us to take our full packs because we were going for a longer walk. As we started walking, Kelly and Jeff were ahead of me. I stopped and looked ahead to the right and thought I could see some brown objects, so I put my binoculars on them. They were elk. I had to stop Kelly and Jeff before the elk saw them. When we got back together as a group, Kelly came up with a plan to get within shooting range of the elk. We would keep the wind in our favor, drop down into a canyon out of their sight, and try to come up from the other side of the ridgeline they were feeding on. However, there was a problem. On the way to put the sneak on them, we encountered a 26-27" wide mulie buck with his buddy and girlfriends. Kelly asked us if we wanted to shoot him. We both declined with the elk being so close. We decided I would stay and find a vantage point to watch the elk if they got bumped to see which direction they headed. Kelly and Jeff would hook to the right while going through a saddle to avoid spooking the deer into the elk. As they executed their plan, they discovered the elk had stopped grazing and moved of the ridge and down across a different canyon to bed down out of the wind. After deciding the shot would be too far away, they came back and picked me up.

Kelly had a plan on how to set up on this herd of about 30 elk. As we made the sneak on them, Kelly determined there was a nice 6x5 bull that was a shooter. As I mentioned before, Jeff would be the first one to pull the trigger on a bull elk. As Jeff and Kelly got set up for the shot, I watched the bull through the spotting scope. Jeff indicated he was ready to shoot, and I anticipated running to congratulate him. As the shot went off, I watched the bull and herd run of around the ridge. Unfortunately, Jeff had shot over the top of the bedded bull. The herd of elk was confused about where the shot had come from, but we could not get set up quick enough for another shot, so we watched them for about three hours. They eventually found a spot to bed down out of the wind, and we got Jeff set up for a shot. He took his shot and missed again. I could see the disappointment in his eyes as the elk moved of. At this point, we all felt that Jeff’s gun was of.

We kept an eye on the elk, and Kelly got us to another spot to set up on them. This time, I handed my gun to Jeff. I told him to kill his bull and smiled with reassurance. Unfortunately, the elk moved off before we could pull of a shot and the herd bull jumped a fence. As he paced back and forth, waiting for the rest of his cows to follow, Jeff got set up with a firm support on the front and backside and pulled the trigger. This time, we were smiling and celebrating as Jeff had just tipped over the herd bull, his first bull elk. Tonight, we would be eating elk loins for supper. I was so happy and excited for a true friend of mine.

The next day, day four, Kelly took us to yet another area to set up and glass for elk. Kelly located some elk bedded down just over a mile away from us, and he spotted a bull bedded down that he said was a shooter. He asked me if I wanted to take a look at it through the scope. I looked at it and gave him a thumbs up. After discussing all of the options, we decided to go back to the truck and drive to a better location that would allow us to come in above the elk without being seen. Coming in from this other location would require us to travel about two and a half miles while avoiding mule deer and other elk. Kelly had spotted a tall, dead tree that was above the main tree line on the ridge above the elk, which we would use as our landmark to set up above the elk.

As we worked our way around the deer and to the elk, we were finally able to identify our landmark. Kelly had a spot we could kill that bull from, and as I started to set up to shoot, I asked how I was going to shoot through all of these trees. Kelly indicated that I had about a coffee can size window to shoot through with a twig going through the middle. It would be about a 125-yard shot at a fairly steep downhill angle.

As I looked down toward the elk, I couldn’t see the bull, but after refocusing the scope, I found him bedded to the right side of the cow in front of the four elk I could see. Everything was still bedded, but one cow in the front kept looking up towards us, so we had to watch every movement we made. Kelly had worked his way over to another area on the ridge, trying to find a better spot to shoot from, when I noticed the cow stand up. I knew I didn’t have much time left, so I motioned for Jeff to tell Kelly to bring the tripod for his spotting scope over to me for my backside support. As we finished getting set up, the bull stood up. I took a breath, let it out, took another breath, let it out halfway, and squeezed the trigger. Immediately, the bull took off running with the rest of the herd. I thought I had just blown the opportunity-of-a-lifetime at my biggest bull ever. Kelly ran over on the ridgeline to watch where the bull went and gave me a “thumbs up” sign with both hands. He said, “You got him, Kevin!”

As we walked to the area where Kelly thought the bull was, a celebration started. As I got closer, I saw the antlers grow bigger than expected. I got very emotional and excited. Kelly Burke had successfully kept us on Jeff’s bull for over seven miles the day before and he had snuck us in to my bull’s bedroom the next day.